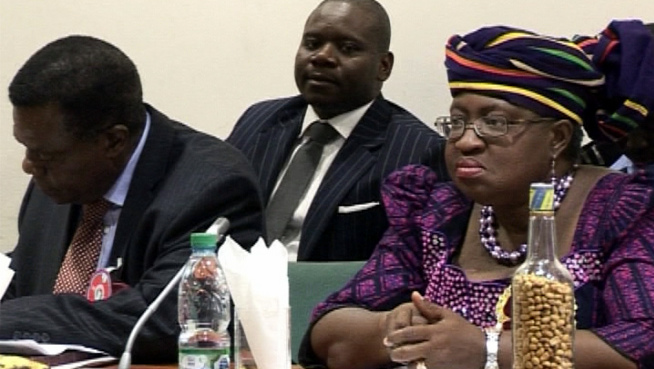 At least N11.55 trillion or $84.52 billion expected revenue into the coffers of the nation’s Excess Crude Account for the eight-year period from 2007 to 2014 are unaccounted for, according to findings by PREMIUM TIMES based on data from multiple government agencies not made public, in violation of the laws of the land, for about a decade now.

The ECA accounting has remained perhaps one of the most opaque public fund mechanisms in the country, puzzling even state governors who repeatedly challenged former Finance Minister Ngozi Okonjo-Iweala for lack of transparency and accountability regarding the organization of the fund.

After a recent National Economic Council meeting in Abuja, a committee of state governors angrily lashed at Mrs. Okonjo-Iweala, accusing her office, as supervisors of the fund, of arbitrariness and probably illegality in the management of a fund meant for the three tiers of government but which the ministry of finance apparently ran as a sole federal government fund.

PREMIUM TIMES’ three-month investigation arrived at its computation based on data analyses of differentials between expected accruals and actual withdrawals from the ECA honey pot.

Based on their reporting, the Nigerian National Petroleum Corporation [NNPC] and the Central Bank of Nigeria [CBN] claim that for the eight years in review, no fewer than N23.79 trillion was deposited into the ECA fund.

In its own accounting, the Federal Accounts Allocation Committee [FAAC] reported that for the same period, N10.58 trillion was withdrawn from the fund.

Although no where in the FAAC reporting was the N1.3 trillion ad-hoc domestic infrastructural investment and capital-intensive spending on the National Integrated Power Projects [NIPP] indicated, PREMIUM TIMES accommodated it in its analysis to arrive at the N11.55 trillion unaccounted ECA revenue.

Our estimate can even be said to be conservative given that we did not compute  what could have accrued to the ECA from crude allocated to the NNPC for domestic refining, but which almost always ended up being sold abroad because of the bad shape of Nigeria’s four refineries.

It is instructive to note that for the first 41 months from January 2007 to May 2010, there was no single public record of transfers into the ECA by FAAC.

After the questionable 41-month silence on ECA reporting, the FAAC curiously resumed reporting in June 2010 till the end of the review period during which N7.16 trillion accrued to the national coffers.

It remains unknown if this unaccounted funds were stolen or mismanaged and if federal law enforcement authorities are currently reviewing the process.

The spokesperson for the Economic and Financial Crimes Commission, Wilson Uwujaren, said he had no information about any ongoing investigation regarding the ECA.

But concerned by what appeared a lack of accountability in the management of the account, the National Economic Council [NEC] on June 29 raised a four-man committee to examine accruals into and withdrawals from the Federation Account and the Excess Crude Account from 2012 to May 2015.

Members of the committee are Governors Adams Oshiomhole of Edo State, Emmanuel Udom of Akwa Ibom, Ibrahim Dankwabo of Gombe and Nasir El-Rufai of Kaduna.

The panel’s report is still being awaited.

Repeated suggestions by the new Muhammadu Buhari’s administration that public funds were poorly and corruptly managed in the recent past appear to necessitate a deliberate, serious and careful look into the management of public funds by past administrations.

The ECA was created by the administration of President Olusegun Obasanjo in 2004 to act as a stabilization fund, closing budget deficits caused by oil price volatility.

The fund was designed to enable savings for the rainy day.

Since its birth however, the ECA has been bedeviled by controversy. One major challenge is the legal status of the body and the constitutional place of the Ministry of Finance in operating both the FAAC and the ECA. Another problem is the zero transparency exhibited by various agencies and officials of government charged with managing the funds over the years.

In recent years, the Ministry of Finance has refused to make public the detailed withdrawals from and accruals to the ECA, making it difficult to track budget spending and periodic status of the nation’s treasury.

The overarching constitutional provision demands a legislative buy-in and approval before any huge withdrawals are made from the FAAC. Likewise, the excess crude account and its administration recognize the three tiers of government as owners and decision makers regarding withdrawals from the account. The third means of checking the activities on ECA is the oversight performed by the National Economic Council (NEC).

All these have been consistently abused by the leadership of the Federal Ministry of Finance thus strapping Nigeria into penury, incessant contingency loans from International communities, and ultimately crippling the dividends that would have accrued to this stabilization mechanism.

In her bid to fend off criticism, Ms. Okonjo-Iweala made effort to give annual summaries of accruals and withdrawals from the Excess crude account for a period of 2011 to May 2015.

However, no clear highlights of monthly accruals and monthly disbursement of the funds to various quarters were provided to Nigerians.

The discrepancies in reporting by the different agencies have been the most frustrating challenge on the ECA.  Going by the NNPC report of actual oil production and monthly oil price within the period under review (2007- 2014), Nigeria is expected to have an inflow of ₦23.79 trillion ($166.87 billion).

In the same manner, the monthly FAAC reports by the Office of the Accountant General reported a total of ₦10.582 trillion ($73.93 billion) as withdrawals from the Excess crude account (ECA).

However, other reports indicate that the Federal and state governments agreed and made withdrawals of $8.425billion (₦1.308 trillion) as fund to implement National Integrated Power Project (NIPP) within the same period.

Cumulatively, total withdrawals of N11.89 trillion ($82.17 billion) was accounted for as withdrawals from ECA as FAAC distributions, funds for Sure P and NIPP.

This is shown in the table below

Annual Oil Revenue and Expected Accruals to ECA (in USD)

With the figures stated above and in table 4 below, the total actual oil revenue for the eight-year period was $603.91 billion while the total budgeted oil price was $442 billion.

By these calculations, the Federal government, from 2007 to 2014 would have realised a sum difference of $166.87 billion as excess crude net expected balance in the ECA.

This is obtained as excess of actual revenue from crude oil ($603.91 billion) over the gross budgeted crude oil revenue ($442 billion).

This is shown in the table below.

The Nigerian National Petroleum Corporation  (NNPC) sells its crude in U.S. dollars, and also remits to the Central Bank of Nigeria (CBN) in dollars. This explains why revenue accrual and excess crude funds figures are usually provided in U.S. dollars.

However, CBN deposits the funds into the Federation allocation account in Naira, leaving room for another level of computation to get the actual NNPC remittances to CBN in Naira.

By computing the corresponding Naira value of the actual and budgeted revenue as given in dollars, it was revealed that a total of ₦23.79 trillion is the expected inflow into the ECA as at December 2014.

Table 4 below shows detail of the figures

Cumulatively, total withdrawals of ₦11.89 trillion ($82.36 billion) was accounted for as withdrawals from ECA as FAAC distributions, funds for Sure P and NIPP.

Summary of Unaccounted Amount in the Excess Crude Funds

Ms. Okonjo-Iweala, through the Ministry of Finance, published summary information on transfer to excess crude account from 2011 to May 2015.

Recalling from Table 5 above, the expected net balance in the ECA as at December 2014 was ₦11.901 trillion.

Authenticity of Data and Verification of Estimated Value

PREMIUM TIMES investigation relied solely on data obtained from relevant government agencies such as CBN, NNPC, OAGF, Budget Office and Ministry of Finance. Moreover, in order to further verify and validate the analyzed data, FOI requests were made to CBN, Ministry of Finance Revenue Mobilization and Federation Account (RevFAC) and the NNPC.

None of the FOI requests to the four agencies yielded the requested details as at the time of this report.

We believe, after interrogating available data from the Office of the Accountant General (OAGF), that no concrete coordination existed between the Ministry of Finance and the OAGF.

So far, PREMIUM TIMES investigation has shown that ₦11.56trillion that should have accrued to the Excess Crude Account is unaccounted for.

It remains to be seen whether the various agencies involved in the management of the account would open up their books and let Nigerians understand how they handled and disbursed the funds on behalf of the Nigerian people.

See the infographics below for more information. 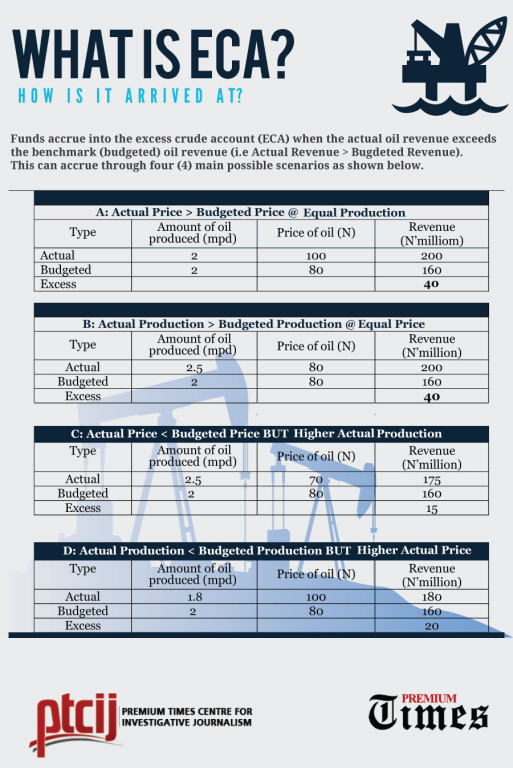