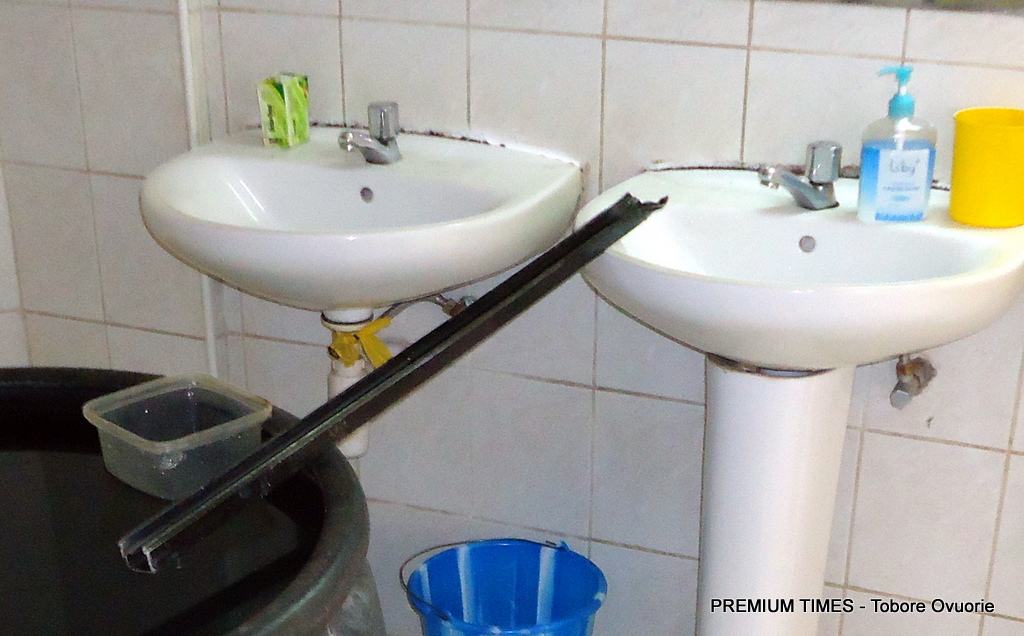 The Nigerian government has led a largely successful effort against Ebola since the deadly virus was imported into the country in July, with only 19 cases and seven fatalities, significantly better than the more than 2,000 Ebola deaths in Liberia, Sierra Leone and Guinea.

Nigeria’s emphasis has been on contact tracing and monitoring– for established cases; and an improved sanitary policy of hand-washing and use of sanitizers as recommended by the World Health Organization, WHO.

The health body recommends either an alcohol-based hand rub or soap and running water, which be made available at every point of care, public places, offices, and homes.

While the Nigerian government says there are no more confirmed cases of Ebola in the country, it has insisted that improved hygiene should continue to check any chance of an Ebola resurgence.

But as the government continues to advocate hand washing and use of sanitizers, its offices are flouting the directive as many including hospitals do not have running water, soaps, or sanitizers for staff and visitors to wash their hands even after using the toilets, a PREMIUM TIMES investigation has found.


The Federal Ministry of Health, which is at the forefront of the campaign of hand washing and use of sanitizers, is the biggest culprit in this anomaly.

At its headquarters in Abuja, the ministry has no sanitizers or functioning tap water. The ministry’s toilet on the first floor of the new federal secretariat in Abuja, had none as of September 4 when the checks were conducted at the height of Ebola scare in the country.

The ministry had bottles of liquid soap, but literally compelled visitors to use scooped water from a big black drum stationed there, after using the toilets, a practice medical experts say is risky.

The immediate past president of the Nigerian Medical Association, Dr. Osahon Enabulele, who is also a family health consultant, said secretions are part of the modes of transmission of the deadly Ebola virus; hence, it is important that infected persons do not have contacts with others through media such as static water in a container.

He said in a case where there is no flowing tap, the drum of water should be chlorinated and not left open. The exact opposite is what obtains at the health ministry and other government-owned agencies.

“It is a matter of ensuring that you have chlorinated water or at the least, disinfected water, at any point in time. Secretions are part of the means of modes of transmission of the virus from infected persons,” he said. “But again, if you have such secretions in water that has been treated with chloride, it is part of the agents that can deactivate the virus. But the most important aspect is to ensure that infected persons do not have contact with others by washing hands in the same place.”

Water containers is a common feature in the ministry and adjoining departments. The restroom at the office of the Head of Civil Service of the Federation was no different. In addition to the container for visitors, when a PREMIUM TIMES’ reporter visited the office September 8, the floor was also waterlogged, posing a health risk to users.

At the Nnamdi Azikiwe International Airport, Abuja, our reporter, who visited the restroom at the arrival hall on September 3 found that there was also no soap for washing hands, much less hand sanitizers in the toilets. The airport serves as one of the key entry points to the country.

Amongst all hospitals visited in Abuja in the course of this investigation, Wuse General Hospital had the worst facilities for visitors and outpatients. There were no soaps or sanitizers, and the taps did not flow, neither was there even a reservoir of water. However, the toilet meant for only staff was sparkling clean – still without soaps and hand sanitizers.

The restroom of the Asokoro District Hospital which was a bit better than that of Wuse General Hospital was still very dirty! The toilets for staff, outpatients and visitors were without soaps and hand sanitizers.

However, the restrooms of the General Out-Patient Department, National Hospital, Abuja, were cleaner than that of Wuse general hospital and Asokoro District Hospital respectively. But there were equally no soaps or hand sanitizers.

The National Orientation Agency, which has also helped in educating Nigerians on Ebola, is itself the exact opposite of the call it makes for hygienic living. There were equally no soaps or sanitizers at the restrooms.
Although the federal ministry of water resources, old secretariat, Area 1, Abuja, had flowing taps, it also lacked sanitizers or soaps for hand washing.

On the third floor of the federal secretariat which houses the federal ministry of culture and tourism, there was neither soap nor hand sanitizers in their restrooms. The floor also houses the offices of dentistry, PPP/diaspora, deputy director procurement, deputy director staff welfare & training, assistant director staff welfare and presidential committee on trade malpractice.

On the ninth floor, which houses the National assembly tower G, there was no soap or sanitizer in the toilets.

Mr. Enabulele said the ideal recommended practice is for people to have running taps, preferably with elbow locks. That design is to allow people avoid taps with the hands and either use their elbows to unlock the taps.

“In some climes, they have what is called knee taps; whereby you can use your knees to unlock the tap. But the elbow ones are commonly available in Nigeria, which can be purchased for as low as N300 per lock; which is quite cheap. Institutions can afford that” he added,” he said.

The Federal Ministry of Health declined to comment for this story. Dan Nwomeh, the Special Assistant, Media, to the minister of health, promised to return our reporters’ calls. He did not. He also failed to answer or return subsequent calls.

But Dr. Jimoh Balogun, Haematologist, Zaatt Central Diagnostic Centre, said it was unfortunate that the Nigerian government was in the habit of not practising what it preaches.

“They don’t mean it because it’s not about saying things, it’s about doing them. You don’t need to go to TV screens to make water run, to provide soaps for people to wash their hands after handshakes, after using the toilets and touching surfaces that are dirty. Or probably after eating. But nobody seems to care; it’s always government propaganda.”