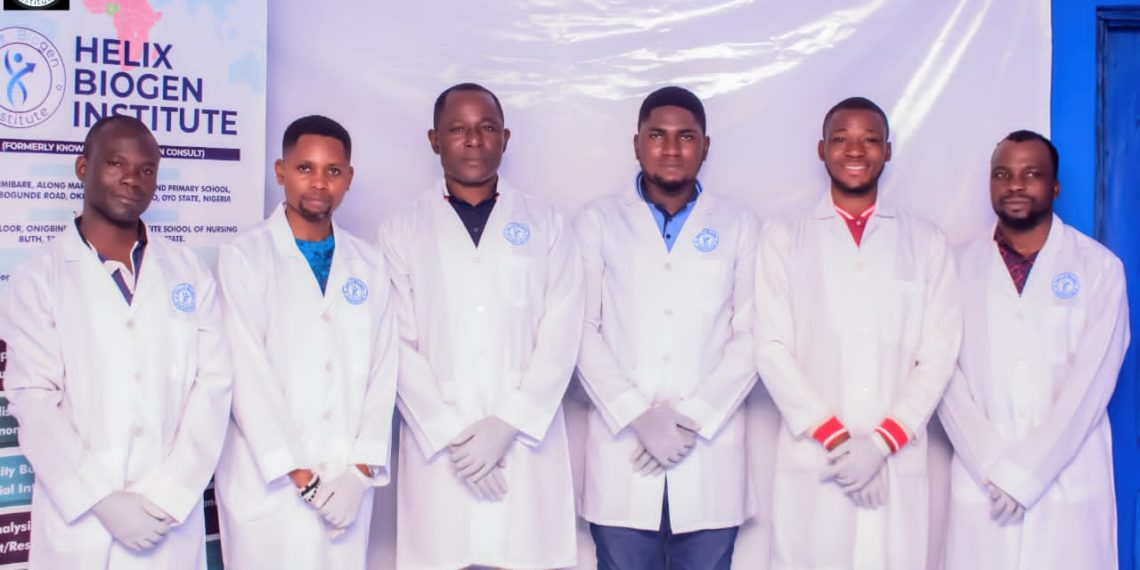 Group of scientists at the laboratory

The research effort, which recently concluded its animal trial based on an approval from the Oyo State ministry of health, has been listed by the WHO as number 61 out of 185 vaccine candidates globally.

Nigeria’s vision for a homegrown vaccine response to the coronavirus pandemic has received a boost from the efforts of microbiologists from six academic institutions in the country.

The team is led by Julius Oloke, a professor of Microbiology and Biotechnology who is the vice-chancellor of Precious Cornerstone University, a private university in Ibadan, while the lead researcher is Kolawole Oladipo.

Mr Oladipo, who holds a doctorate in medical virology, immunology, and bioinformatics, is also the head of the Department of Microbiology at Adeleke University.

Although the group had no prior experience with vaccine development, some of its members had produced an immune-boosting drug, Trino IB, while others had also participated in other research activities during their study years.

According to the scientists, Trino IB, which is said to be good for the management of sickle cell, diabetes, fibroid, and other medical conditions, has been approved by the National Agency for Food and Drug Administration and Control (NAFDAC).

Speaking on the current research effort, Mr Oladipo told PREMIUM TIMES that the objective of the study is for the team to contribute to scientific efforts towards fighting the pandemic, and that “we also perceive that there will be variants and the effectiveness of vaccines will vary.”

Mr Oladipo said the group is involved in translational research, one that an average person in the community can benefit from.

The team is already enjoying an endorsement from the World Health Organisation (WHO) which has announced the initiative on its list of vaccine candidates in preclinical stage.

The endorsement has come as a boost to the team, with Mr Oladipo describing it as a “huge surprise.”

The research effort, which recently concluded its animal trial based on an approval from the Oyo State ministry of health, has been listed by the WHO as number 61 out of 185 vaccine candidates globally.

Industry experts believe the emergence of this initiative is significant at a time vaccine inequalities are rising, and COVID-19 cases and deaths continue. It may become Nigeria’s first human vaccine development trial in recent times.

The vaccine is a Protein Subunit vaccine. Subunit vaccines (sometimes called acellular vaccines) contain purified pieces of pathogens, which have been specially selected for their ability to stimulate immune cells. Subunit vaccines are considered safe because they contain fragments of the pathogen that are incapable of causing disease.

There are however many hurdles to scale, of which funding is a major one. The researchers spoke of frustrations, saying a number of famous Nigerian philanthropists that they approached refused to help, while the public fundraising platform Go Fund also offered no comfort.

“Yet we persevered as we have accepted the discomfort of a slowed pace because we believe that slow and steady wins,” Mr Oladipo said.

Interestingly, President Muhammadu Buhari had in his independence speech on October 1 stated that the Central Bank of Nigeria has an ongoing N85 billion Healthcare Sector Research and Development Intervention Scheme to support local researchers in the development of vaccines and drugs to combat communicable and non-communicable diseases, including COVID-19.

Additionally, the Nigerian Sovereign Investment Authority is raising a $200 million fund to enhance Nigeria’s domestic pharmaceutical capacity as a way of complementing the efforts of the CBN.

The group has, however, not benefited from any of these government initiatives to support research in Nigeria.

This newspaper reported how funding is affecting COVID-19 research in Nigerian universities, as researchers bemoaned lack of support from the government.

Speaking on funding challenges, a professor of virology and National President Nigerian Society for Virology, Clement Mboto, said they are a global problem and not exclusive to Nigeria.

“Funding challenges are at their peak in Nigeria because we do not have value for research. If we did, the COVID-19 would have taught us a lesson,” he added.

But fate appears to align with the beliefs of these researchers as CTI Clinical Trial and Consulting Services headquartered in Georgia has offered to partner them in conducting the clinical trials.

Mr Oladipo believes that a homegrown vaccine will significantly reduce vaccine hesitancy in Nigeria. “It will be some relief to the people and also acceptability because we are close to the grassroots and the people know us. I am very sure it will improve acceptability.”

Speaking to the lack of access to vaccines and how it causes hesitancy, Mr Oladipo said he does not agree there is vaccine hesitancy in Nigeria and Africa, given that there are no vaccines or enough vaccines.

He said vaccine hesitancy can only be claimed when people have access to vaccines, which he said is not the case in Nigeria or Africa.

Mr Tomori said this is not the first human vaccine research effort in the country. However,he said lack of funding support, absence of requisite research facilities and infrastructure and lack of political will and commitment combined to nullify previous efforts.

“Unless we address these issues, current efforts will end up the same way,” he warned.

A former vice-chancellor of the University of Calabar and professor of medical microbiology and parasitology, James Epoke, also said a locally produced vaccine will reduce hesitancy if it is proven to be efficacious.

Mr Epoke said, “vaccine research and development requires a lot of sophisticated equipment which was available in the now defunct Yaba facility. Definitely, funding will be a challenge.”

He also added that because most people who can provide financial support to the initiatives are profit-inclined, they may not be willing to contribute to such initiatives.

Mr Epoke added that local research should be encouraged and researchers should also present their research for testing.

“Nigeria has the capacity to manufacture vaccines in the country, if we put the interest of the country first,” said Mojirayo Adeyeye, the director -general of NAFDAC.

“Meanwhile, a vaccine company in partnership with the government is making great efforts to start manufacturing vaccines in Nigeria,” she added.

Ms Adeyeye said although local production of vaccine will reduce vaccine hesitancy, some Nigerians will still be uncomfortable because it is made in Nigeria. However, she said there will be a better general acceptance of the vaccines.

When asked if the agency is aware of vaccine research efforts in the country, Ms Adeyeye said, “NAFDAC is aware of some R&D on vaccines going on in some institutions in Nigeria. However, NAFDAC is not supporting these efforts now.”

She said the agency was putting things in place internally to strengthen its regulatory system and get to a maturity level that will allow WHO to approve the country to manufacture vaccines.

Nigeria, like the rest of Africa, has fallen behind the curve in beating the COVID-19 virus through vaccination. This is largely due to a lack of access to vaccines.

According to the National Primary Healthcare Development Agency (NPHCDA), the government agency in charge of vaccination and immunisation in Nigeria, out of Nigeria’s estimated 206 million population, only 5,693,300 people have received their first dose and 3,079,239 persons have been fully vaccinated.

This number represents 5.1 per cent and 2.8 per cent of Nigeria’s population respectively.

Data from Nigeria Centre for Disease Control (NCDC) shows that cases, as well as death tolls, are rising as the virulent and more deadly delta variant continues to spread. As of the time of filing this report, there had been 212,339 cases and 2,900 deaths attributed to the pandemic in Nigeria.