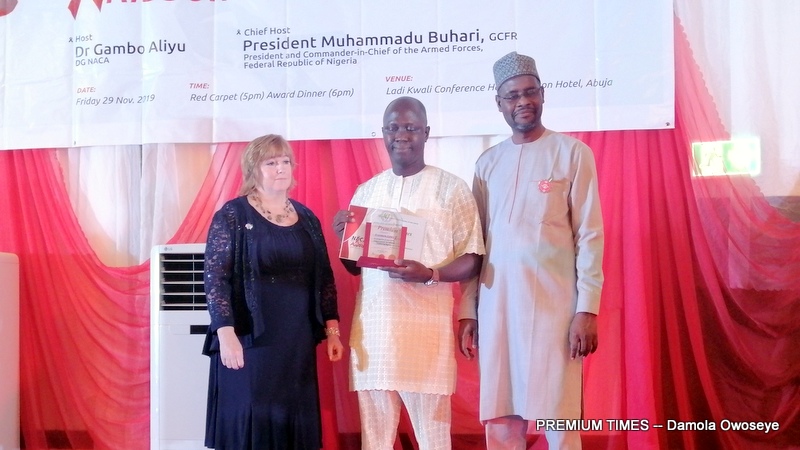 The managing editor of PREMIUM TIMES, Idris Akinbajo, receiving the award for the DG NACA and representative of the US ambassador to Nigeria

Premium Times, others honoured for work in tackling HIV in Nigeria

PREMIUM TIMES was on Friday honoured as one of the most supportive media in the reporting of HIV/AIDS in Nigeria.

The award was given at a ceremony organised by the National Agency for Control of AIDS (NACA) to commemorate the World AIDS Day.

The World AIDS Day is celebrated December 1 every year to honour the people who have fallen to the disease as well as people living with HIV. It is also celebrated to raise awareness on the disease and the need for people to know their status.

Four categories of awards were given on Friday. They include the National Pioneer Response Category, National Response Support Category, Ending AIDS in Nigeria Category and NEPWHAN.

The award given to PREMIUM TIMES was under the National Response Support Category.

This newspaper was recognised for using its platform to reach millions of Nigerians with “correct and factual information on HIV awareness, prevention, treatment and stigma and discrimination in Nigeria.”

Two other media organisations that received awards, in the same category, were Daily Trust and NTA.

PREMIUM TIMES, Nigeria’s leading investigative newspaper, also has a dedicated team of health reporters, who focus on key health issues, how to adequately inform Nigerians about them, and how to ensure transparency in the health sector.

Others who received awards on Friday include the first National Coordinator of the Network of People Living with HIV/AIDS in Nigeria (NEPWHAN), Pat Matemilola; a former senator, Khairat Abdulrazaq-Gwadabe, who was honoured for her legislative role in the establishment of NACA; a former governor of Lagos State, Bola Tinubu, honoured for setting up the first state AIDS agency in Nigeria and former President Olusegun Obasanjo whose administration established NACA.

They were all recognised for their various contributions to the fight against HIV in Nigeria.

Speaking at the dinner, the Minister of Health, Osagie Ehanire, said the World AIDS Day is important because it allows room for reflection on the successes and work that need to be done in the fight against HIV in Nigeria.

Mr Ehanire, who gave the keynote address, said Nigeria has a lot to celebrate as progress has been made in the fight against HIV.

He, however, said the country must not get carried away by this because there are still lots of people living with the disease who do not know their status because they have not been tested or have not started treatment.

“We have the right to celebrate how far we have come but we still have some people who have the HIV virus who are yet to be tested. We are marking the day today to remember those who have died. We should look at where we are coming from and we should know that we are not yet done. We should see it as a battle because the virus as small as it is has killed so many people,” he said.

Mr Ehanire said the recently conducted HIV survey, NAIIS, is a reliable data which has shown the real status of the killer diseases in Nigeria.

He said about 1.9 million people are positive and a little over 1 million are on anti-retroviral drugs.

“The remaining 900,000 should be identified and placed on treatment. There is a self test kit that will be in the market very soon for people who are shy to go in for treatment. We need to encourage testing and treatment and this requires community support. With testing, a viral load suppression can be achieved and the disease will not be transmitted to another person.”

He lamented the recent trend of new infections, saying it is common among young people and women.

We need to get them to come out and get tested and receive treatment so that they don’t undo the progress Nigeria has made in the fight against HIV epidemics, he said.

He said the government has also scaled up mother to child treatment for pregnant women so that people who go for antenatal can be detected early and their children can be spared the disease.

“Nigeria is committed to ending the scourge and as such increased its domestic funding to the global fund. He said Nigeria has increased its funding by 20 per cent from $10 million to $12 million and the money is payable over three years.”

He also thanked all donor partners that have been working with Nigeria to fight the scourge of the killer disease. He enjoined NACA not to relent in its activities against the disease.

The Director-General of NACA, Gambo Aliyu, in his remark said the event is to celebrate HIV heroes, those working in the fight against HIV, the people who have lost their lives and those living with the disease.

He said Nigeria is already in the last stage in the fight against HIV/AIDS but meaningful engagement with the community is key to achieving the success of eradicating HIV in Nigeria.

“On this night we are gathered to honour individuals, communities, organisations who have been part of the fight against the disease. However, the battle against the disease can only be won if everybody is tested, know their status and those who are positive begin treatment,” he said.