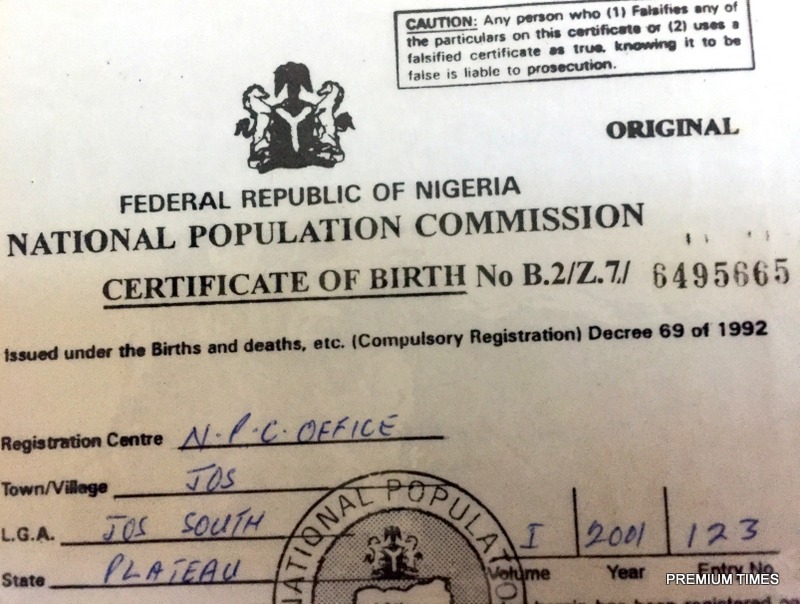 A sample of the Nigerian Birth Certificate issued by the National Population Commission.

Despite a resolution by lawmakers that birth certificates should be issued free of charge to Nigerians, the National Population Commission (NPC) has continued to charge a fee for the document.

The House of Representatives last year declared as illegal, payment of money to the commission to obtain birth certificates for newborn babies.

The NPC, however, says it is yet to be formally notified of the resolution by the lawmakers.

Earlier, Daily Trust newspaper published a report that the NPC was frustrating birth registration by charging N4500 for birth certificates. The agency contracted the process to a private firm, Socket Works Limited, under a public-privatepartnership (PPP) arrangement.

According to the newspaper’s report which Ms Onyejeocha cited, the United Nations Children’s Fund’s (UNICEF) factsheet on birth registration in Nigeria revealed that about 70 per cent of the seven million children born annually in the country are not registered at birth.

Adopting the motion, the lawmakers unanimously resolved to direct the NPC to discontinue the arrangement with the private firm “and return to its mandate of registering births and deaths in Nigeria at no cost to citizens as provided by law.”

When PREMIUM TIMES reporter visited the General Hospital, Kubwa last month, an NPC official there said a fee was required.

For babies under two months, the fee is N500, while for those from two months to 17 years, it is N4,000. He said individuals above 18 years needed to go to the head office of the NPC with a declaration of age affidavit and passport photographs.

At the NPC Head office located at Wuse, Zone 7, officials state slightly different fees from the ones earlier outlined at the Kubwa General hospital.

A front desk official said N4,000 is required for a birth certificate to be issued to anyone under 17 years.

For applicants above 18 years, he said the fee is N10,000 accompanied with a copy of a declaration of age certificate and passport photographs.

To replace a lost or damaged birth certificate, he said a fee of N7,000 would be charged.

Another staff of the agency who asked not to be named said the agency was aware of the directive of the lawmakers but was waiting for the director to give the go ahead for compliance.

“We cannot take any decision on our own. For now, we are still taking money for birth registration. But once the Director orders us to stop, we would have no choice than to stop,” he said.

In a telephone interview with PREMIUM TIMES the Director, Public Affairs at NPC, Muhammed Isah, also said the agency was waiting for an official letter from the National Assembly before obeying the directive.

“We are waiting for a letter to be transmitted officially. That is how government works,” he said.

“In the letter, it will be written in detail what is to be done and what not to do. We are ready to abide by it,” Mr Isah said.

Until the bureaucratic process runs its course, Nigerians will continue to pay for the document.