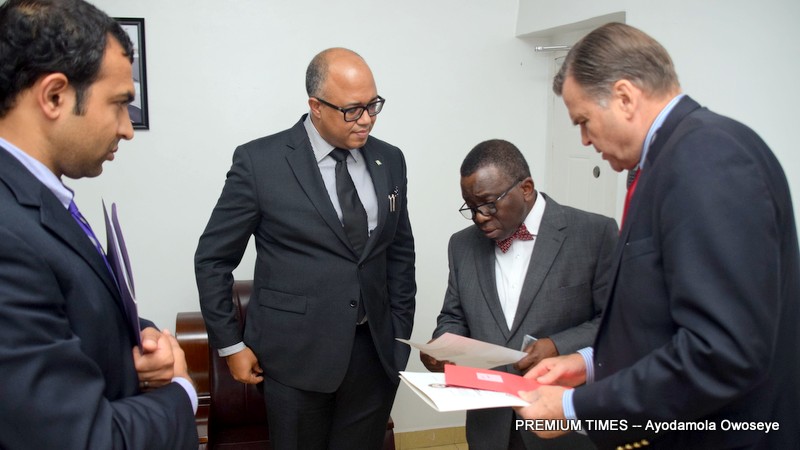 The U.S. Ambassador, Stuart Symington at the Nigeria Centre for Disease Control (NCDC)

How US is partnering Nigeria to strengthen health sector – Diplomat

The United States Ambassador to Nigeria, Stuart Symington, on Monday urged Nigeria to continue to invest in building resilient health systems as this will safeguard citizens and act as a strategy to bolster economic transformation in the nation.

According to a statement made available to PREMIUM TIMES by the Nigeria Centre for Disease Control (NCDC), Mr Symington made this call during a courtesy visit to the agency’s office in Abuja.

Mr Symington reportedly said that the correlation between health security and economic stability for nations cannot be overemphasised as Nigeria contends with various economic and social priorities,

The statement said the visit which is meant to reinforce the role NCDC plays as Nigeria’s national public health institute, demonstrates a strong confidence in the long-standing relationship with the Nigerian government.

The visit also highlights the progress made in the prevention, detection and response to infectious disease outbreaks.

“The experience that I have had during my visit to the NCDC headquarters has shown me how things can be done efficiently in a public-sector organisation. I commend the NCDC for being a model for other national public health institutes on the continent,” Mr Symington said.

According to the statement, over the years, the U.S. Government has provided support to Nigeria for the prevention, detection, response and control of infectious diseases.

The statement also added that through the support of the U.S. Government, the NCDC has strengthened its capacity to contribute to global health security.

According to the statement, Mr Symington also reinforced the United States government’s leadership and commitment to the Global Health Security Agenda (GHSA) whose goal is to support countries to strengthen their ability to prevent and respond to epidemics.

“Through the United States Centers for Disease Control and Prevention (US-CDC) we have supported the NCDC to train frontline health workers, strengthen laboratory capacity and disease surveillance across the nation. Particularly laudable among NCDC’s recent achievements, is the coordination of the development of a National Action Plan for Health Security. This plan reinforces the need for multi-sectoral collaborations to fight epidemics and ensure global health security.”

Meanwhile, according to the release, the Minister of Health, Isaac Adewole, also hosted the ambassador alongside the NCDC Chief Executive Officer, Chikwe Ihekweazu.

The NCDC chief briefed the ambassador on his agency’s key achievements, current challenges and priorities for the future.

In his remarks, Mr Adewole applauded Mr Symington’s visitation and said it would serve as a landmark the agency.

“This visit is important to NCDC as it has given the agency and the Federal Ministry of Health a platform to share our strategic commitment to national and global health security. The Government of Nigeria has increasingly demonstrated that national governments can take ownership for protecting the health of their citizens. We are grateful to the US Government for the continuous support we receive to strengthen our health sector.”