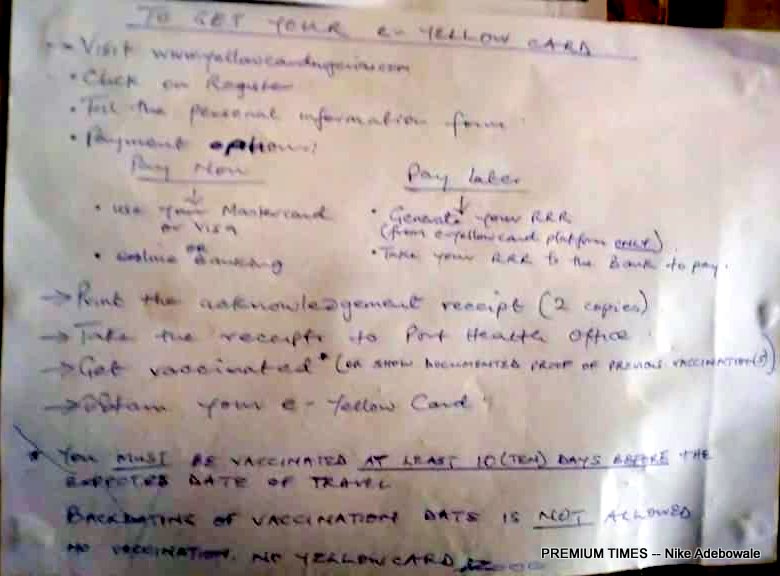 Procedures to follow to obtain a new yellow card from the federal Ministry of health.

After years of health and immigration officials routinely conniving to breach the procedure, it appears the rules for the issuance of yellow card is now being strictly enforced in Nigeria.

Inoculation against yellow fever is compulsory for international travellers from risk countries like Nigeria to some countries, and the ‘yellow card’ is evidence the carrier is vaccinated against the deadly disease.

But over the years, complicit Nigerian officials help travellers obtain the card without the vaccination it officially confirms.

In the first week of August when this reporter visited the issuing office at the Federal Ministry of Health in Abuja, she observed the rules being bent. Intending travellers were routinely being issued the card after payment of N2500.

Most of the individuals got the card without receiving the vaccines.

Rahanat (not real name), a citizen of Trinidad and Tobago who lives in Nigeria, has a duly stamped yellow card.

“I never received the yellow fever vaccine before I got the yellow card,” she told PREMIUM TIMES in Abuja.

The young woman explained all she did to get the card was pay N2, 500 at the Nnamdi Azikiwe International Airport in Abuja, Nigeria’s federal capital.

“I had no knowledge that I needed a yellow card to travel out of Nigeria. It was my first time of travelling out of the country to the United States,” she narrated.

“At the airport I was asked for the card and I said I did not have it. It was at that point I was directed to the Port Health Office to get one before I could proceed on my trip. I pleaded with the lady at the office to just issue the yellow card to me because I hate injection.

Many other travellers, Nigerians and non-Nigerians alike, daily leave the country with the card but without vaccination against the disease.

A man in his mid-40s who identified himself simply as Tony said he got the yellow card at the Ministry of Health vaccination centre at the Federal Secretariat, Abuja.

“I told the lady at the desk that I just needed the card, not the vaccine and she requested I pay N3, 000 as against the N1,000 boldly written on the wall. I gave her the money and my international passport. In less than five minutes, I got a stamped original yellow card,” he recalled.

In the first week of August PREMIUM TIMES visited the Federal Ministry of Health to apply for the yellow card. It turned out as easy as Mr Tony described. The reporter got the card almost immediately without receiving the required yellow fever vaccine.

The desk officials directed applicants to a notice posted on the wall close to the entrance to their offices. The notice stipulates the procedure of application.

It begins with visiting the website, www.yellowcardnigeria.com, to register application for the card. Upon a click, the site displays the official fee, which is paid online and afterwards documented on the printout to be presented at the point of vaccination.

The reporter noticed that the ministry from August 1 introduced a new yellow card with enhanced security feature that costs N2,000.

This is different from the former card which costs just N1,000.

An official told the reporter that yellow cards issued before the introduction of the new one are still valid, if the issuance was after 2015.

“There is a procedure you are supposed to follow to obtain the yellow card, which includes paying N1,000 to the bank,” the woman at the vaccination stand told the reporter.

The reporter requested to skip the vaccine part, citing fear of injection. Eventually, she got her yellow card without taking the vaccine.

But not anymore, at least in Abuja, it now seems. Later checks at the ministry by PREMIUM TIMES in the last week of August showed that staff now compel applicants to follow due process before being issued the card, including vaccination against yellow fever.

Reporters who conducted the checks realised the officials had become strict in enforcing compliance with the formal process.

Yellow fever is a viral hemorrhagic fever transmitted to humans through the bite of infected mosquitoes. This can become a deadly disease especially for people who have not been vaccinated.

A single dose of the yellow fever vaccine, however, provides lifelong protection against the disease. The vaccine gives immunity within 30 days and is effective for 99 percent of persons vaccinated.

The World Health Organisation (WHO) recommends that to travel to countries where there is evidence of persistent or periodic yellow fever virus transmission, people need to be vaccinated and obtain the yellow card.

Also known as the International Certificate of Vaccination or Prophylaxis (ICVP), the yellow card is usually requested at immigration points.

Without it, travellers are not allowed into or out of countries prone to yellow fever. Africa falls within the yellow fever endemic zone.

Countries like South Africa and Ethiopia strictly look out for the yellow fever vaccination cards of travellers coming from high-risk countries before allowing them into their countries.

To show the importance of the vaccination and yellow card, about 125 Nigerians were denied entry into South Africa in 2012 because the South African Port Health Authority had concerns about the validity of the yellow fever vaccination cards the Nigerian were carrying.

State of yellow fever in Nigeria

Yellow fever is still a major disease in Nigeria. In spite of the government’s introduction of yellow fever vaccine as part of routine immunisation since 2014, Nigeria last year recorded an outbreak of the disease.

Before the confirmed case in 2017, the last reported case was in 1996, so the country was not ready for the outbreak.

The first case was confirmed in September 2017 in a seven-year old female in Ifelodun Local Government Area of Kwara State.

Between that time and March this year, 1,640 suspected cases were recorded and 115 confirmed.

In January, WHO raised alarm over the deadly epidemic of the disease in Nigeria.

The international health organisation warned that yellow fever cases throughout Nigeria were escalating concerns about the risk of large, costly, and difficult-to-control outbreaks in urban areas, requiring huge supplies of life-saving vaccines and increasing the potential for large-scale national and even worldwide spread.

With yellow fever emerging again as an international threat, the answer lies in vaccination. It is also essential to guarantee a sustainable response, developing in-country capacity to respond to this epidemic and avoid future ones, the agency said.

When confronted that people were collecting yellow cards without getting vaccinated, the Assistant Director, Press and Public Relations, Federal Ministry of Health, Olajide Oshundun, denied knowledge of such practice going on at the ministry.

He said anyone visiting the ministry’s vaccination centre to obtain a yellow card must go through the normal procedure and receive the vaccine before been issued the yellow card.

According to him, the federal government introduced the new yellow card as a security document for those leaving the country.

“To avoid racketeering, government changed the former yellow card to a new one entirely. The card is a security document and the method of paying and obtaining the card is through a designated bank,” he said.

He explained that that steps in getting the vaccine and card include filling the form online and generating a code.

“It is this code that would be requested at the point of payment. After this, you can go to the vaccination centre and show them your evidence of payment,” he said.

Speaking on the implication of getting the yellow card without getting vaccinated, the Deputy Director, Risk Communication, Nigeria Centre for Disease Control (NCDC), Ayoola Olufemi, said taking the yellow fever vaccine will help prevent international spread of the virus.

“The yellow fever vaccine is very potent against yellow fever disease. So it is advisable for everyone to take the vaccine, especially those leaving the country. This will help prevent the spread of yellow fever virus to the international community,” he said.

Mr Olufemi said those leaving the country without taking the vaccine, especially those visiting yellow fever prone areas, can bring the virus back to Nigeria, thereby putting others at risk.

“An outbreak of yellow fever in any country is a global emergency and is always treated as such. The yellow fever disease is endemic in tropical areas of Africa and South America.

“It is important for people traveling into and out of the endemic areas to be vaccinated before traveling. People should know that it is for their protection too in addition to protecting others,” he said.