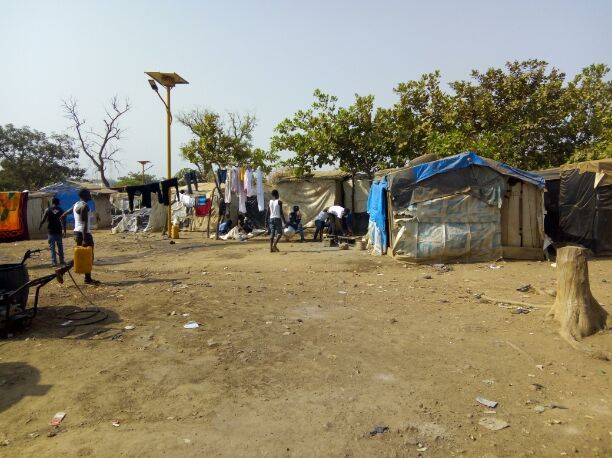 At least 24 critical cases of chicken pox have been treated at the Internally Displaced Persons (IDPs) camp at new Kuchingoro in Abuja between January and May, health officials said.

Owhin Eguonor-Oghen, a health facilitator, told PREMIUM TIMES during a visit at the camp, Tuesday, that the disease was rampant in the camp since the beginning of the year, but said interventions by nongovernment groups and individuals helped to check further spread.

At the time of the visit, there were no more serious cases though it was observed that the standard of living at the camp was poor, hence the spread of the disease.

“It started in January with two cases reported at the clinic and then broke out in February with 10 more cases. 7 more cases were treated in March and it finally dropped down to 1 case in May,” Ms. Oghen said.

She described the case of the 24 children as “highly infectious and contagious”.

“At the wake of the outbreak, it started spreading, everybody coming to the clinic were having signs and symptoms of the disease. Rashes, itches and pain sores all over their body so it was really that bad.

“The clinic was able to administer drugs to 24 patients who were in critical conditions at different intervals. At some point we ran out of the calamine lotion and some other things because they need to bath regularly with medicated soap and we need to stand in the gap.

“There was a period of isolation from time to time because the disease have stages. The 24 children are those at the highly infectious and contagious stage. At that stage they are isolated, they are not allowed to go to school so they don’t mix up with the other kids and get them infected.

“With the available resources, help from NGOs and concerned individuals we were able to save the affected and reduce the spread to the barest minimum though we still have a few cases here and there but awareness, education and medication have gone round,” Ms. Oghen said.

On the remote and immediate causes of the outbreak, Ms. Oghen said the spread of the diseases was mainly caused by the poor hygienic environment of the camp.

“The chicken pox disease is caused by a virus and that virus can easily be found in areas where there is moisture, damp or poor hygienic environment which is prevalent in the camp because of the way they live in clusters.

“Generally, the environment is one measure factor and again their poor mentality. No matter how you try to make them do something for their own benefit, if they don’t understand it fully and even when they do, because of their poor mentality and level of reason they will still contact certain sicknesses. We always try to make them take precaution and be more aware of their environment through education, awareness and advocacy,” she added.

The health clinic at the new Kuchingoro IDP camp renders free health services to the IDP’s. It was funded and established in September 2016 by the German embassy through an intervention by the then German president, Joachim Gauck.

Ralph inusa, the program manager at the clinic stressed the need for more health care volunteers.

“We are running short of health volunteers every day and it is affecting the health status of the community,” Mr. Inusa said.

Usman Adamu, the camp’s vice chairman while thanking the health clinic, volunteers and individuals who played different roles in reducing the spread of the disease said there are 1,572 men, women and children currently residing in the camp.

“I want to thank God for the intervention of the clinic to help control the spread, I also want to thank the German people for the health facility and all the volunteers. The visitors also brought medicine for us, I appreciate them. People visit us almost every day. NGOs, CSOs, they are trying,” Mr. Adamu said.

Apart from health Issues, Mr. Adamu said the greatest challenge at the camp was hunger.

“There is no work, feeding is our greatest challenge. Yes, we receive help but it’s not really enough. If I call everybody to come out, if you look some people, you will start crying. It’s hard for us to see two square meals, talk more of three,” he said.