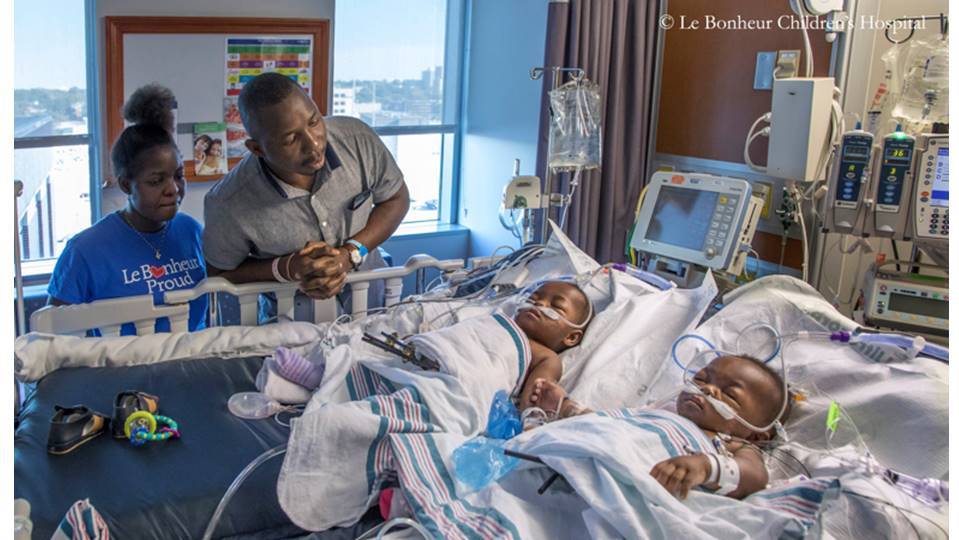 The conjoined twin girls, Miracle and Testimony Ayeni, whose case had raised serious medical concerns about a year ago have been successfully separated after a surgery at the Le Bonheur Children’s Hospital, Memphis, Tennessee, USA.

A release issued by the Founder of the Linking Hands Foundation, Efe Farinre said the highly complex and extremely risky procedure which took 18 hours to perform was carried out by a team of medical experts who carried out the operation without charging any money.

The release stated that while the girls will require further surgeries, the hospital is (confident) about their long-term prognosis and this has restored joy and hope back to the family of the Ayenis whose nights of trauma and anxiety had been resolved by this medical exploit.

The Ayeni twins were fused together at the lower half of the body, a condition which medical experts say occurs in only 1 in 200,000 live births.

The conjoined twins were born in Enugu State on November 16. The father, Samuel Ayeni, is a building supervisor while the mother, Mary, is a fulltime house wife.

The two parents who are from Kogi State had been in a dilemma about how to resolve the complexities of the uncommon medical condition as well as raise the sum of over one million dollars which was required for the surgery before the Linking hands Foundation took over the matter in January as part of its “Every-Child-Counts Initiative”.

While the Foundation made several efforts to get financial and other forms of support for the separation of Miracle and Testimony, two Nigerian volunteer medical advisors who are in the Diaspora, Opesanmi Esan and Uzoma Gbulie, facilitated a contact with the Le Bonheur Children’s Hospital, Tennessee, USA, which eventually agreed to carry out the operation pro bono in May.

The Linking hands Foundation disclosed that the Kogi State Government donated N3 million for the upkeep of the twins while the surgery lasted just as Arik Air offered free return tickets to the children and their parents in order to facilitate their travels to the United States of America.