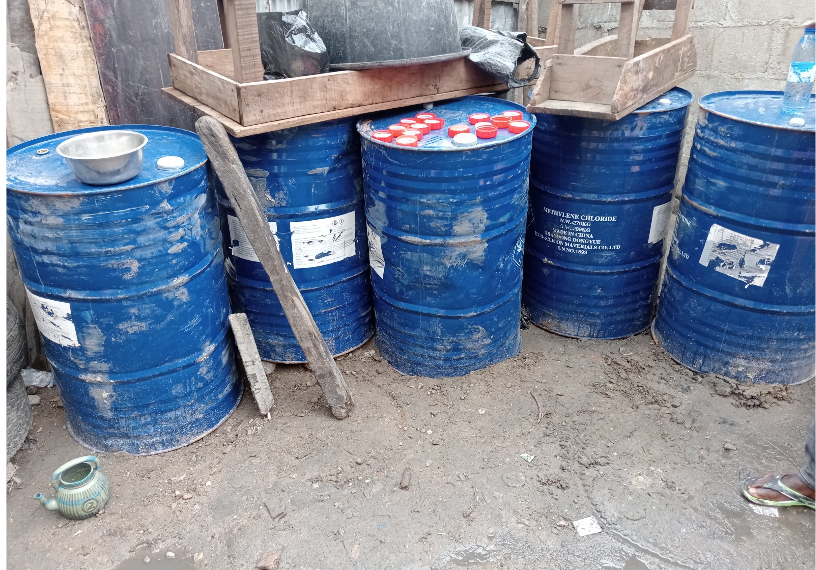 In Northern Nigeria, Methylene Chloride, locally known as 'Sukurdai' among locals, is one of the most abused substances.

A mother of two, Fatima Muhammed lost her husband to the abuse of methylene chloride, a dangerous colourless chemical used in the paint and metal industry and notoriously inhaled and abused by some Nigerians.

Mrs Muhammed said her husband was a trafficker–turned–abuser until he died. But her husband is not the only one in the habit of abusing this deadly liquid. Her brother-in-law was also a helpless abuser.

“My husband detested seeing his brother taking the substance,” she recalled. “He would beat him whenever he saw him with it. But despite the ill-treatment my husband meted out on him, his younger brother continued using the substance.”

One day, she entered her brother-in-law’s room to give him food but found him sprawled awkwardly. She tried to wake him up to eat, but no response.

“I felt his pulse, only to discover that he was no longer breathing. I looked around, then I sighted the substance in his hand.”

Not long after her brother-in-law’s death, her husband became an abuser.

One day, she said he went into the bathroom and refused to come out. Anxious, Mrs Muhammad entered the bathroom to check on him only to find her husband “looking dump with the substance in his hand”.

“A few days later, he became ill but refused to go to the hospital,” she said.

“After observing him for a while, we noticed the illness was the result of inhaling methylene chloride. We managed the illness for a few days before he eventually died. The doctor told us the substance abuse killed him.”

In Northern Nigeria, Methylene Chloride, locally known as ‘Sukurdai’ among locals, is one of the most abused substances. There is no official record for the number of people killed by the drug, but abuse and deaths have been reported in Kano, Adamawa, Gombe, Borno and Bauchi states, a PREMIUM TIMES investigation has found.

“Abuse of methylene chloride can cause lung cancer,” said Hassana Abubakar Liman, a medical doctor at Aminu Kano Teaching Hospital in Kano. Apart from the respiratory system, she explained, it can affect the liver, and virtually all human organs. Inhalation and oral use allow one to be exposed to large doses, meaning that a lot of it gets absolved in the human body.

When it gets to the heart, it causes “arrhythmia”, a medical condition known as irregular heartbeat.

“The heart needs to beat regularly at a particular time to pump blood to the whole body and deliver oxygen, but when it is erratic, too fast or too slow, organs that depend on oxygen like brains, even the heart itself can be deprived of oxygen and it can lead to death,” Mrs Liman said.

A Senior Resident Psychiatrist at the Aminu Kano Teaching Hospital, Hajiya Shehu, has dealt with cases of patients who abused methylene chloride. But none was as depressing as the case of a 14-year-old boy who was brought to her hospital, she said.

“The boy was affected by seizures. The mother [who brought her] described how her son was seeing things and he was all scared before he started convulsing,” the psychiatrist narrated to PREMIUM TIMES. “After taking many details, we realized his shirt has a methylene chloride odour. We also found out the boy has overdosed himself and depressed the central nervous system of his brain. It has affected his mental orderliness.”

Confession of a teenage addict

On the streets of Kano a few months ago, PREMIUM TIMES spotted Aliyu, a 15-year-old boy in the Sabon Gari area of Kano State, inhaling Methylene Chloride.

“My parents are here in Kano but I don’t live with them,” the teenager said while interacting with our reporter, who acted as a potential abuser. “Whenever I take this chemical, it makes me forget my sorrow and feel awesome.”

Aliyu inhaled the substance stored in a pure water polythene bag, at every drop of a word.

A few kilometres away, in the Dawakin Dakata area, several other young boys were seen inhaling the deadly liquid in an open space.

This reporter met Sani Roget, one of the drug abusers in the area; it was impossible to have a civilized conversation with him because he was under the influence of the colourless liquid and still adding to his dose. Highly intoxicated — and obviously out of his mind — the young man described himself as a “movie star Roget”.

Obviously intoxicated by the substance, he stood in front of the reporter’s camera and assumed the role of an artiste, singing, dancing and clowning to suit his posture.

Inside Kano black market where ‘sukurdai’ is sold

Deadly liquid Sukurdai appears really scarce in grocery stores but abusers and retailers know the places where the substances are available to regular customers. Jakara Yan Kaba market in Kano is one such place. The market is notorious for breeding young children and teenagers who are addicted to substances like Methylene Chloride.

These children are lured into abusing this dangerous substance at the recycling business section of the market, an investigation by PREMIUM TIMES – based on interviews with addicted locals and children in the state – has revealed. This is also a starting point for their engagement in criminal activities.

Abdullah Mai Kano, also known as Sarkin Kasuwa Yan Kaba, loosely translated as the head of the recycling market, said a child — his relative — placed under his care depended on Methylene Chloride. And this quickly led to his untimely death.

“I have seen people die from using this chemical,” he told PREMIUM TIMES. “We are doing our best together with the police, but we cannot do it alone without the support from parents and the government.“

But how do these substances get into Kano and other northern states since they are not manufactured there?

Journey into unregulated world of ‘Sukurdai’ in Lagos

Although it was hard tracing the production and supply of this deadly chemical to a specific company, our investigation led this reporter to an unregulated market in the Mushin area of Lagos.

Digging further, PREMIUM TIMES found that penetrating the market that served as the distribution centre for Sukurdai was a hard nut to crack because the distributors of the substance operate secretly to conceal their illicit businesses and identities.

But a member of the secret syndicate would later agree to link the reporter to a black market hub in the city. On a scheduled date, the reporter dressed in a costume fit in for a drug retailer, on the recommendation of his guide.

Disguised as a potential buyer from Kano, PREMIUM TIMES, from the Mushin centre, found that the main distribution centre for Sukurdai is in Ojo Giwa Street in the Tinubu area of Lagos Island. It is from there that the product is packaged and distributed to different parts of the country.

Arriving at the Tunibu market, after exchanging casual greetings, one of the main distributors of the substance, who simply identified himself as Usman, scrutinised this reporter who posed as a new customer. As arranged, the reporter’s guide told the suspicious seller that he had met our reporter at the Alaba International market in the state and that they were business partners.

“I used to buy the product in Kano but the price has skyrocketed in recent days,” the reporter-cum-potential-buyer told the seller.

“We have someone at the luxurious park who usually carry the product everywhere in the North such as Gombe, Kano, Taraba and Adamawa, and we do business with many people from these places.”

To follow through the distribution process to Kano and Adamawa, this reporter obtained Sukurdai in large quantities at Tinubu. A passenger bus driver was arranged by Mr Usman to convey the ‘goods’ to Kano the following day. This reporter also joined the trip as a passenger. During the nearly 24 hours journey from Lagos to Kano, our reporter observed how the driver moved freely unchecked by simply bribing supposed drug enforcement agents on the highways.

The journey was itch-free.

Even though rampant drug abuse in Northern Nigeria has been a subject of concern among locals and officials, virtually no attention is paid to Sukurdai.

The agency primarily responsible for checking the use and trafficking of illicit drugs in Nigeria is the National Drug Law Enforcement Agency (NDLEA). However, a spokesperson for the agency told PREMIUM TIMES that the agency, though aware of Sukurdai, does not arrest users or distributors of the product.

Femi Babafemi, the director of Media and Advocacy at the NDLEA headquarters in Abuja, said Methylene Chloride is a regulated substance in some parts of the world but he is unaware of any regulation that places restrictions on the substance in Nigeria.

Mr Babafemi also said NDLEA deals with illicit drug users but in the case of methylene chloride, “it’s not in our purview”.

He added that any substance that is being misused attracts the full weight of the law, either through arrest or
prosecution.

“The much we know about this chemical is that it is a precursor chemical – its composition is to produce household items like paint, electronics and bathroom ways,” he said.

“It is also used to produce pharmaceuticals product. That is why it still has free movement because there is no jurisdiction to prosecute any abuser but whenever we see it in large quantity, we suspect the use and seize it.”

‘This story was produced with support from Tiger Eye Foundation and the MacArthur Foundation.’