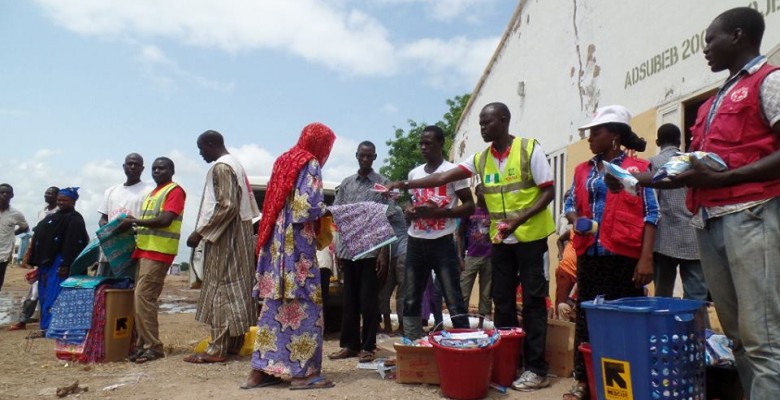 An IDP Camp used to illustrate the story

At least 50 children are diagnosed with severe acute malnutrition every day at various communities and camps for internally displaced persons (IDPs) in conflict-ravaged Borno State, health officials have said.

After the 2016 malnutrition crisis in Bama where over 500 children under the age of five were treated for malnutrition, the Nigeria government and various humanitarian agencies deployed a lot of resources to ensure children in the camps are well fed.

According to the United Nations International Children’s Emergency Fund (UNICEF), at least 233,000 children have been diagnosed and treated for acute malnutrition between October 2016 and May this year.

For instance, the UK Department for Integrated Development (DFID), is believed to have contributed $10 million towards the treatment of the malnourished children.

Despite such high figures, the problem does not seem to have abated. Health officials at various medical facilities in the state say the number of children treated only scratches the surface of the problem.

With more displacement of people from their communities as the insurgency continues, more children are being diagnosed with severe malnutrition.

“We usually record new cases of malnutrition on daily basis here,” said Yakaka Babagana, 28, a medical personnel who is the Provider of Community Management of Acute Malnutrition (C-MAM) programme in Muna camp clinic.

Muna, a community outside Maiduguri, hosts the largest number of IDPs in the state capital.

“The problem of malnutrition is big here, and on daily basis we record at least 8 to 10 cases on the average,” added Mrs Babagana.

“We have two clinics here in Muna and all of them are located within the IDP camp even though we service even those living outside the camp.

“Presently, here in Clinic ‘A’, we have 174 cases of severe acute malnutrition that we are managing for the eight weeks administration of Ready to Use Therapeutic Food (RUTF). While children that have regain their normal nutritional status are being discharged, we still record new cases,” she said.

A PREMIUM TIMES’ reporter who was in the clinic in the morning hours, saw number of women carrying skinny and frail children waiting to be attended to.

“She is feverish and has lost weight even though I breastfeed her and give her normal food,” she said.

The ill-looking baby would have to be subjected to “appetite test” which involves giving the mother a sachet of the RUTF supplement to feed her, the C-MAM Provider explained.

“But we have to ensure the mother washes her hands with soap and water, and then wash the baby’s face before we allow them to commence feeding the child with the RUTF. The way the baby responds to the nutritional food is one of the factors we use to determine their state of malnutrition,” said Mrs Babagana.

“If the child does not take the RUTF it means it is need more medical attention. But before we come to that we would have taken the vital test and carry out the measurement of the body weight using a scale and MUAC tape,” she added.

Another child, Fatimata Babagana, 18-month-old, suddenly fell ill three weeks ago, her mother said. According to her, she recently arrived Muna camp as an IDP after fleeing attack in her community two weeks earlier.

The C-MAM Provider discovered that the mother had continued to breast feed the child even though she has been pregnant for six months.

“That is what led to her complication,” said the health personnel. We have always told them to visit the clinic and seek advice once they are pregnant and the child at hand is still being suckled.”

Asked why she had to continue breastfeeding the child even when she was six months pregnant, Fatimata’s mother, Amina, said “the breast milk is sometimes the only food I have to give her.”

This reporter left Clinic A about 10.32 a.m. and, at least, nine severely malnourished children had been admitted for treatment.

The situation was not different in Clinic ‘B’.

Zainab Ali-Goni, 32, the C-MAM Provider at the Clinic said, “we are just attending to the sixth child who was brought in with new case of severe acute malnutrition this morning.”

She said they had “ten new cases the previous day which is Monday 23rd September.”

“We normally record between 30 to 40 new cases of children with severe acute malnutrition weekly in this clinic. We also notice the surge in the number of new cases and we later found out that we have more new arrivals of IDPs whose communities in Mafa, Gajigana and Magumeri have been attacks by insurgent recently. And means going by what we have recorded now, we should be expecting more cases as the week goes,” she said.

Sanjay Das, a Nutrition Manager at the UNICEF Maiduguri Field Office, admitted that “there is still more work to be done in Borno State.”

Meanwhile, UNICEF said it has been able to secure additional £22 million (N9.8 billion) from the Department for International Development (DFID) to cater for the increasing cases of malnourished children as the insurgency rages on.

“This is going to be what we call flexible integrated and timely (FIT) project which focuses mainly on Borno state to improve the nutritional status,” said Mr. Das.

“The new project on Malnutrition has already started since April this year and it will be continued for the next three years, precisely it will elapse in March 2022.

“With this new fund, we are targeting an estimated 87, 000 severe acute malnutrition children in the next three years.

Mr. Das said the first phase of the nutrition project only covered the procurement of RUTF for the 233,000 children, and the second funded project “is a comprehensive multi-sectorial project because we believe we cannot resolve the problem of malnutrition with providing only the treatment.

“Because the more you treat malnutrition, fresh cases of malnutrition will be coming and this can go on and on unless we work on the prevention part of malnutrition. Under this package, we will be doing nutrition, water sanitation and hygiene, health intervention, child protection and education programme.”

Mr. Das said malnutrition is not necessarily caused by the lack of food; rather it is a function of ingesting food with little or no nutritional value.

“First at the pregnancy stage, if one does not take good care of the mother by giving her meals with adequate nutrients, the mother is like to give birth to a child with low birth rate, and such a child can turn out to be malnourished. And the child is likely to easily get infected with different diseases like diarrhoea, pneumonia and they are the risk of dying easily.

READ ALSO: Dangote mulls giving out half of wealth to charity

“And the third most important factor is lack of access to health facilities. Like here in the Borno due to this ongoing conflict, most hospitals and clinics are damaged and the people are not getting adequate services, as well as timely access to health services,” he said.

He also said using local herbs as medication for a sick child can also lead to malnutrition.

He added that the unrelenting conflict in the region, as well as natural disasters such as flooding, make it tough for aid workers to effectively combat malnutrition.

“Our main challenge for the execution of the nutrition especially in the last project was insecurity which prevented us from accessing some of the project areas,” Mr. Das said.

“Another challenge for us especially in the southern part of Borno state was flood; we could not gain access to communities during the raining season.

Mr Das said they also have the problem of “scattered population” in southern Borno, unlike in the central part where most of the communities are in the same location.

“Some of the health facilities in the south of Borno are 10 km to 15 km away from the next village, and for the treatment of malnourished children, they need to come on a weekly basis. And some of the parents were not able to come regularly to the clinics.”