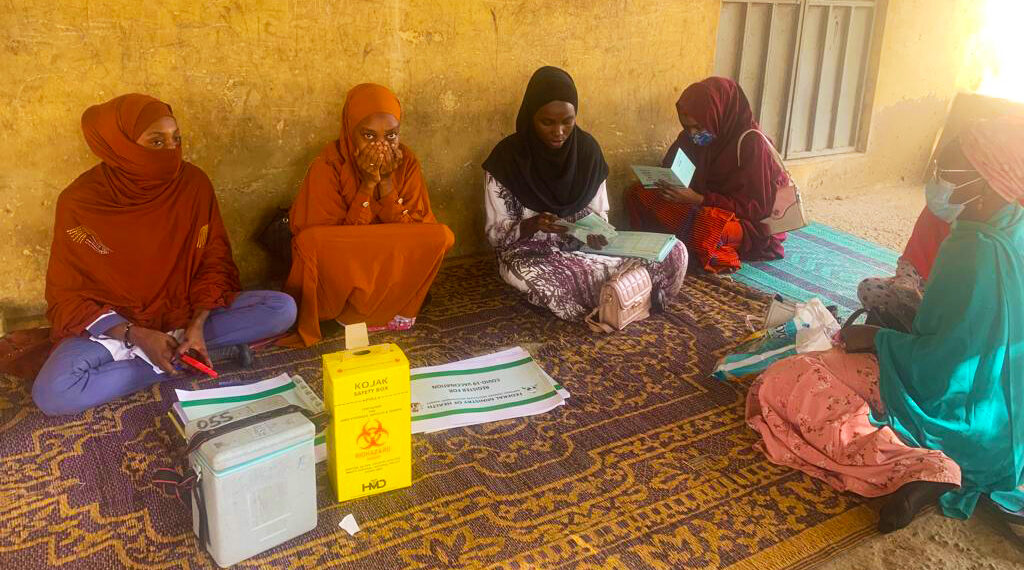 Vaccinators say although the majority of those coming for vaccination had no plans of going to hajj in 2022, they do not want to miss out whenever the opportunity comes.

About three minutes walk from a busy road in the Tukuntawa area of Kano State is a vaccination centre where residents, passers-by, and other interested persons take jabs of COVID-19 vaccines.

On a Tuesday, last month, the COVID-19 vaccinators, all women, sat on a mat placed on a cemented floor in front of a building that seemed abandoned.

The vaccination centre, located in Kano Municipal Local Government Area, has about six pillars supporting the zinc roof which serves as a cover for the vaccinators and their tools. The pillars also serve as a supporting stand for both vaccinated and unvaccinated residents who gather around the centre every morning to discuss issues around COVID-19.

At the end of such chats, some unvaccinated persons return home the same, while others agree to take jabs of the vaccines before dispersing. One such vaccinated person is 37 years old Abdullahi Idris.

The plan of going on the Islamic pilgrimage to Saudi Arabia, hajj, is the only reason Mr Idris accepted jabs of the COVID-19 vaccines, he said.

Mr Idris, a resident of Tukuntawa, had initially sworn never to take the vaccine due to many reasons, including “fear of becoming impotent.”

He, however, had a change of mind following one of their discussions at the centre. A vaccinator had told them that “proof of COVID-19 vaccination” is a major criterion for a visa to visit Saudi Arabia for hajj, an annual pilgrimage Muslims are expected to make at least once during their lifetime if they can afford to do so.

“I took a jab of the vaccine because I intend to go for hajj soon and without a card to prove my vaccination status, I can’t achieve that dream,” Mr Idris told PREMIUM TIMES in Hausa.

He said he would not have accepted the vaccines because there are rumours the vaccine could lead to impotency or prolonged illness.

Hajj is one of the five pillars of Islam, mandatory for those who can afford it.

The hajj involves visits to Islam’s holiest sites in Saudi Arabia and the performance of some religious rites.

Saudi Arabia takes pride in its guardianship of Islam’s holiest sites in Mecca and Medina and its organisation of the annual hajj which draws over 2.5 million pilgrims from across the globe.

However, in 2020, due to COVID-19, the Kingdom reduced the number of pilgrims allowed to visit the country to just about 1,000 Saudi citizens and residents. It also barred Muslims abroad from the rite for the first time in modern times.

Similarly, in 2021, only 60,000 fully vaccinated citizens and residents of the Kingdom were allowed to take part in the annual event.

However, the 2022 hajj was opened to one million foreign and domestic pilgrims who had been fully vaccinated against COVID-19, tested negative for the virus, and were between 18 and 65 years old. Nigeria was allocated over 43,000 hajj slots with over 2,000 of that figure allocated to Kano State.

Saudi Arabia, with a population of over 30 million, has so far recorded 826,667 cases of COVID-19 with 9,502 deaths. It has also administered over 68 million vaccine doses as of 4 December, according to data from the World Health Organisation (WHO).

As part of COVID-19 preventive measures and health protocols, the Saudi Arabia government announced that only fully vaccinated persons would be granted access to its Kingdom.

With this condition, many intending pilgrims like Mr Idris were left with no choice but to be vaccinated.

Similarly, Habib Rabiu, a resident of Gwagwarwa in the Nasarawa area of the state, said the fear of not fulfilling his intentions of going to Saudi Arabia for hajj prompted him to take shots of the vaccine.

Mr Rabiu said although he knows the vaccine is safe with no major side effects, he does not believe the virus exists.

Zainab Aliyu, a COVID-19 vaccinator at PHC Gwagwarwa, said the number of people visiting the centre for vaccines increased following news that only fully vaccinated persons could travel to Mecca.

Ms Aliyu said although the majority of them had no plans of going to hajj in 2022, they do not want to miss out when the opportunity comes.

She said many people initially refused to accept jabs of the vaccine due to misinformation about how the vaccine kills or negatively affects the human system.

For those still refusing to accept the vaccines, “we educate them on the benefits of taking the vaccines which includes protecting themselves and their loved ones from the virus,” she said.

In an interview with PREMIUM TIMES, the state’s Immunisation Officer, Shehu Abdullahi, said hajj played a role in ensuring more persons get vaccinated against the virus.

“Hajj played a role in terms of mobilising those intending to go on a pilgrimage someday,” he said.

Kano, the most populous state in Northern Nigeria, has recorded over 5,000 cases of COVID-19. Out of this, 127 persons have died, data from the Nigeria Centre for Disease Control (NCDC) shows.

The first case of COVID-19 in Kano was recorded on 11 April 2020, but some mass deaths recorded in the densely populated city created controversies between the Nigerian and state governments.

While the then Presidential Task Force on COVID-19 set up by the federal government to coordinate the country’s response to the novel virus had insisted that most of the deaths were linked to the pandemic, the state government led by Governor Umar Ganduje denied the connection.

Many residents at the time had also denied the existence of the virus, even as they described the efforts to curtail its spread as Westerners’ attempts at reducing Africa’s population.

Apart from neglect of cautionary measures put in place by the government, such as the use of face masks, observing social distancing, hand washing and the use of sanitisers, many Kano residents defied the lockdown to go about their businesses.

However, despite the attitude of the residents to the pandemic, Kano State has consistently ranked high among the states with a high turnout for vaccination.

Kano State, a predominantly Muslim state, has vaccinated at least 70 per cent of its targeted residents against the COVID-19 virus.

Data published by the National Primary Health Care Development Agency (NPHCDA) shows that about 7.7 million people in the state have been fully vaccinated against the virus and over 3 million are partially vaccinated.

About 1.3 million people have also received the booster dose of vaccines, placing Kano as one of the five top-performing states in the country.

The Deputy State Immunisation Officer (DSIO) in the state, Auwalu Idris, told PREMIUM TIMES that over 70 per cent of the targeted population have taken at least one shot of the COVID-19 vaccine.

Mr Idris said the increase in vaccination rates was achieved through various strategies, including the incorporation of vaccination in strategic places like shopping malls, markets and religious gatherings.

“We put in place a robust plan involving all stakeholders who can offer support in achieving the state’s designed objectives,” he said.

The Kano State Government disputes the data from the NPHCDA. It said more people have been vaccinated than the NPHCDA data shows.

The state’s immunisation officer, Mr Abdullahi, told PREMIUM TIMES that the data published by the NPHCDA only covers a part of the vaccination campaign, which he described as Scales 3.0.

The data further indicates that over one million people have received the booster dose of the vaccine.

The country commenced its COVID-19 vaccination campaign on 5 March 2021, over a year after the first case was recorded in the country.

It began the campaign with the initial delivery of four million doses of the Oxford-AstraZeneca vaccines from COVAX, an initiative aimed at ensuring equitable distribution of vaccines globally.

Nigeria has gone ahead to receive millions of other vaccine doses which include Moderna and Johnson & Johnson (J&J) vaccines as donations.

The UK, Japanese and Italian governments, telecom giant MTN and European Union amongst others donated several doses of COVID-19 vaccines to support Nigeria’s efforts in vaccinating at least 70 per cent of its population.

(This is the first of a two-part series on COVID-19 vaccination in Kano. The production of the story was supported by the Centre for Democracy and Development.)