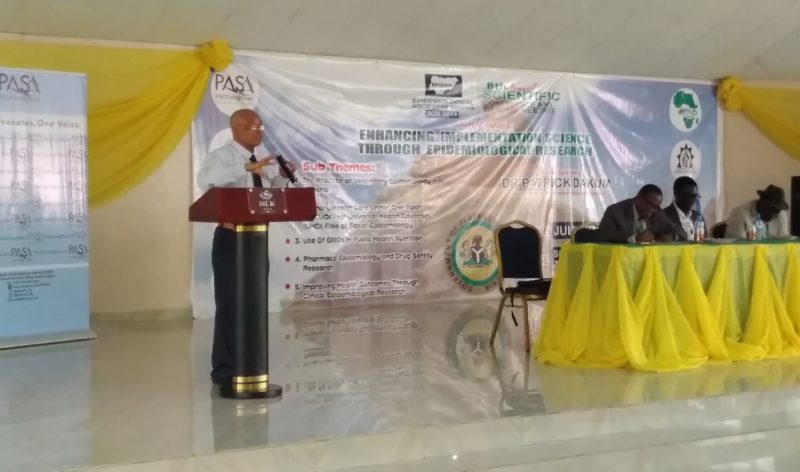 To advance research in Nigeria’s primary healthcare system and prompt response to disease outbreaks, the Partnership for Advocacy in Child and Family Health at Scale (PACFaH@Scale) is holding a session this afternoon.

The session as part of main event of the 8th Annual Scientific Conference and General Meeting of the Epidemiological Society of Nigeria (EPiSON2019).

PREMIUM TIMES reported that EPiSON2019 is holding in Jos, the Plateau State capital, between Monday and Wednesday.

According to organisers, the theme of the session is “Primary Health Care Under One Roof (PHCUOR) for Universal Health Coverage (UHC): Role of Social Epidemiology”.

PHCUOR is modeled on guidelines developed by the World Health Organisation (WHO) for integrated district-based service delivery and on majorly, the principle of integration of all PHC services delivered under one authority, at a minimum.

Medical experts have identified the weakness of PHCs across Nigeria as chief among causes of the country’s grim health indices and prevalent disease outbreaks.

“The PHCs which are meant to be the first point of contact for anybody in need of care is largely dogged with multiple challenges. This is why we are here to make a case on the need to improve the system and advance epidemiological research to help keep track of diseases,” organizers said.

A paper will be presented on research findings on challenges with the PHC system in Nigeria.

Yesterday, a pre-conference workshop was held. Discussions centered on the importance of the Epidemiology of Cardiovascular Diseases which have long overtaken infectious diseases as the most feared global killer.

The term epidemiology covers the description and causes of not only epidemic diseases but diseases in general.

PREMIUM TIMES will bring you live coverage of today’s session.

2:15: The opening ceremony has ended to herald the thematic part of the event.

Participants are currently having their lunch amidst photos inside the conference hall at Silk Suites in Jos, the venue of the event.

The next on the agenda is a plenary on “Primary Health Care Under One Roof (PHCUOR) for Universal Health Coverage (UHC): Role of Social Epidemiology”.

3:30 P.M – M. C. Asuzu, the chairperson of the session, is on his way to the stage after he was called by the moderator. He was followed by other panellists.

He said the session will drive discussions around challenges facing Nigeria’s PHCs through the PHCUOR.

A presentation of research titled “A scoping Mission on Primary Health Care Under One Roof in Nigeria” conducted by the Society for Public Health Professionals of Nigeria (SPHCN) is underway.

Tolu Fakaye, FCT Chairman of SPHCN is making the presentation. He starts by going down memory lane on the establishment of PHCUOR in Nigeria.

He said the National Primary Health Care Development Board was brought on board to oversee affairs of PHCs across the nation.

Mr Falake explains how his association partnered with DRPC to embark on the “scoping mission” so as to find how to improve the PHCUOR project.

He acknowledges the support of DRPC and the PACFAH@scale project in strengthening PHC and health care in general.

Going into his presentation proper, Mr Falake said the mission of the research was to identify roles of NPHCDA in implementing the PHCUOR policy.

In 1978, Nigeria, along with other World Health Organisation’s member countries adopted the declaration instituting the primary health centres as the basic structural and functional unit of public health delivery system.

There has been three major attempts at achieving people oriented PHC in Nigeria. The first attempt was made between 1975 and 1980. A second attempt, led by the late Professor Olukoye Ransome-Kuti, was between 1986 and 1992.

NPHCDA was established in 1992 and it heralded the third attempt.

Mr Falake calls on his colleague, Abubakar Mohammed Sadiq, to give a breakdown on the methodology of the scoping mission.

Mr Sadiq said the research among others, focused on performance of states and LGAs in empowering PHCUOR implementation through the PHCUOR.

Sabastine Esomonu who delivered findings of the research said implementation of PHCUOR proved difficult under four of its nine pillars.

In administration, he said there was initial reluctance by state governments to establish their state primary health care boards. He said some states later obliged in a bid to access the Basic Health Care Provision Fund.

On legislation, Mr Esomonu said every state is expected to have a law for their State Health Care Board (SHCB) assented to by the governor. “Most states are yet to achieve this”, he said.

On the minimum package services, he said one of the challenges to achieving this is acute understaffing in PHCs across the nation.

The medical doctor said no state has established a high-level human resources structure through the state primary health care board so as to drive the PHCUOR policy.

PHCUOR is modeled on the principle of integration of all PHC services delivered under one authority, at a minimum.

The official listed funding and lack of human resources as major impediments to the PHCUOR policy.

But many PHCs, according to a PREMIUM TIMES investigation are facing critical shortages of skilled hands, forcing pregnant women to abandon them for the Tertiary and secondary institutions.

Mr Esomonu said most states do not have human resources and database. “All the states are facing critical shortages of manpower for PHCs”.

Challenges of PHC in Nigeria

PHCs in Nigeria remains negatively affected by multiple challenges, chiefly because of the mismanagement of billions of naira allocated over the decades to public health facilities.

This was why the PHCUOR policy was established to merge both federal, states and donor-funded interventions in achieving a vibrant PHC system.

He recommended more funding and coordination of the state primary health board. He said the PHUOR plan needs to be redesigned to touch other areas left behind.

He wraps up the session to a round of applause.

A panellist said there is a need to link state primary health care boards with the ministry of health for implementation of the PHCUOR.

A participant raises concern on the need for medical officers on health to be included as an integral part of the PHCUOR policy implementation.

He said nothing of such was mentioned during the “scoping” session.

“Even the institutions that produce these human resources are also key in the engagement”.

He said an advisory committee should be created to avoid bottlenecks.