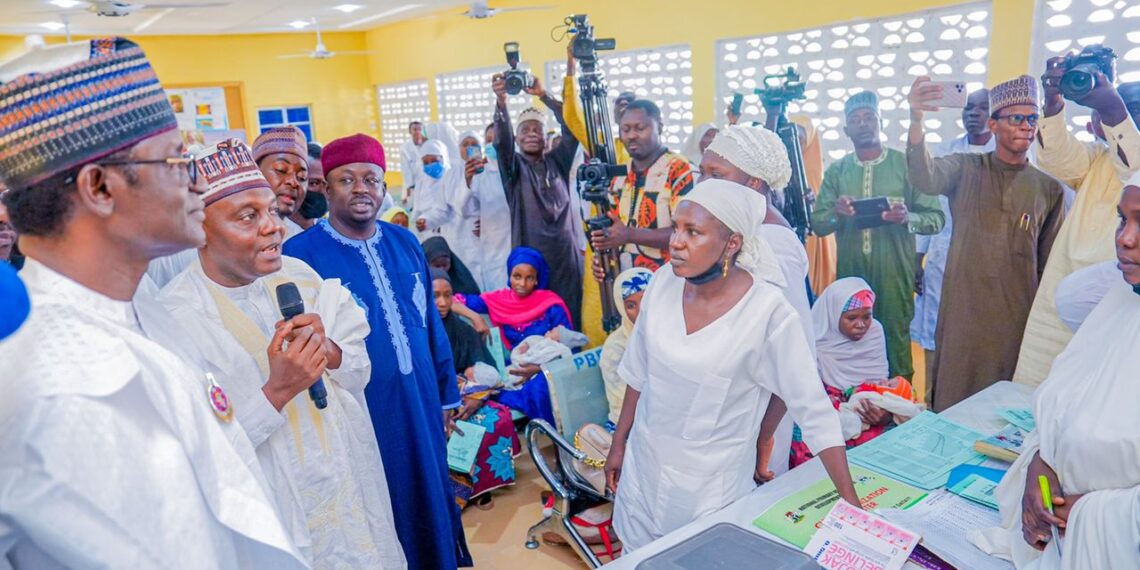 Yobe has reconstructed 138 primary healthcare centres out of the 178 destroyed by Boko Haram.

The Boko Haram insurgency has had a negative impact on the health sector in Nigeria’s north-east region.

The terrorists have targeted, among others, medical facilities around the region and kidnapped many health personnel, some of whom died in their captivity or were brutally murdered while performing their duties.

For the over 10 years that the insurgency has raged, residents of affected communities faced difficulties in accessing healthcare services. Apart from the destruction of health facilities and the killing and kidnapping of health workers, other factors that caused the difficulties include curfews and bans on motorcycles in the areas. Also, the influx of displaced persons overstretched the healthcare system in major towns.

As of 2015, three years after a state of emergency was declared in Borno, Adamawa and Yobe states, the insurgents had destroyed 60 health facilities, attacked 90 health workers, killed 22 of them and displaced over 300 others in Yobe State alone.

Overall, over 20,000 people have been killed in the insurgency, and over two million displaced. Over seven million people in Borno, Yobe, and Adamawa states also required humanitarian assistance, with more than half of them being children.

However, even before the insurgency, the region had some of the worst health and socioeconomic indicators in Nigeria. Its weak health system was marked by insufficient facilities and scarcity of skilled workers.

These have brought several implications. Over two million people displaced by the Boko Haram conflict are still living in internally displaced camps across the region.

Overcrowding and poor hygiene in the camps during the insurgency’s heydays made them hotspots for outbreaks of diseases like cholera. There were also numerous cases of acute malnutrition among children, as well as deaths as a result of malnutrition.

Access to healthcare was significantly impacted by increased population, migration and transportation constraints. The state’s human resource for health was severely eroded by the flight of (particularly non-indigenous) health workers and the suspension of programmes providing external technical assistance.

But the state government’s lifting of a moratorium on recruitment and providing incentives for staff retention and support are enhancing the recovery of the healthcare system in Yobe. A free-drugs policy and decentralised drug supply appear to have improved access to healthcare.

This improvement has been credited to Governor Mala Buni’s policy to reverse the negative health indices in the state, many of which existed even before Boko Haram.

At a recent commissioning of 138 primary healthcare centres reconstructed out of the 178 destroyed by Boko Haram in the state, Mr Buni said the development was a fulfilment of one of the major promises he made at his inauguration as governor on 29 May 2019.

The governor said the level of destruction by Boko Haram made his government commit to the rehabilitation and reconstruction of primary healthcare centres in the state.

“You may recall that during my inaugural address and swearing-in ceremony on Wednesday 29th May 2019, I made it very clear that healthcare delivery will undoubtedly be a key priority of our administration and we would rehabilitate, upgrade and establish at least one functional Primary Healthcare Center in each of the 178 political wards in the state to make healthcare delivery accessible and affordable.

“This became necessary following the mass destruction of public structures including health facilities, schools, electricity, and water sources by the Boko Haram insurgency. Similarly, this administration is determined to reform the health sector generally for a total transformation in healthcare delivery across the state,” he said.

Mr Buni said the state government has started a programme to train one midwife from each of the 178 political wards of the state.

This, he said, is to bridge a gap in human resources in the state’s health sector.

He also said that he had sent a bill to the state’s House of Assembly for the establishment of the Yobe State Emergency Medical Ambulance Service Agency.

“As part of our efforts to address the huge gaps in human resources for health, the government has institutionalised the foundation year programme where one female candidate is selected yearly from each of our political wards and enrolled in a midwifery course with full sponsorship. This necessitated the expansion of facilities at the Shehu Sule College of Nursing and Midwifery, Damaturu.

“The government will continue to absorb Nurses/Midwives and other skilled professional health workers being produced from our health training institutions to bridge the gaps in human resources for healthcare delivery,” the governor said.

“This administration is also about to float the Yobe State Emergency Medical Ambulance Service Agency. An executive bill in that regard has already been transmitted to the State House of Assembly and is currently at an advanced level of legislative action. These are part of our strategies for reducing maternal, pre-natal, and child morbidity and mortality that may occur due to complications of pregnancy, labour, and delivery.”

Mr Buni said the measures were geared towards reducing deaths among under-five children and pregnant women in the state.

“It is important to note that one of the cardinal objectives of our administration is to provide quality healthcare delivery to reduce mortality and morbidity rates due to communicable diseases and also reverse the prevalence of non-communicable diseases to meet global Targets, and significantly increase the life expectancy and quality of life of our citizens. We remain committed to our drive towards achieving Universal Health Coverage (UHC) and indeed other health-related sustainable development goals,” the governor said.

On taking health delivery to hard-to-reach communities of the state, the governor said:

“As you are aware, in our quest to reach special and hard-to-reach populations and reduce delays in accessing essential and life-saving healthcare services, this administration procured and distributed over 88 customized tricycle ambulances for transporting expectant mothers in labour, or emergencies in order to reduce delay in reaching health facilities or for referral patients in need of further care. Based on the huge positive results achieved with the tricycle ambulances, we are today launching additional tricycle ambulances.

“In order to address the challenges of healthcare financing and the provision of qualitative drugs and consumables the State government established the Contributory Health Care Management Agency(YOCHMA) and the Drugs and Medical Consumable Agency (YODMA) with the aim of easing access to health care provision for our people. The scheme which was initially meant for civil servants has now been extended to the informal sector while about Two Hundred Thousand (200,000) vulnerable persons have also been enrolled in the scheme”, he explained.

PREMIUM TIMES gathered that before the inauguration of the 138 PHCs, the Commissioner for Health in the state, Lawan Gana, had commissioned some healthcare centres constructed by the state government at communities at the border with Niger Republic.

After that event, Mr Gana told journalists that “the new healthcare centres were established in Tulo-tulo, Dole-Machina, Mayori and Gumsa border communities by the Buni administration to make healthcare accessible and affordable in the communities.”

He said the development would ameliorate the sufferings of residents of those communities as they would no longer need to go to Niger Republic for medical treatment.

SERAP sues Wike, Okowa, others over ‘failure to account for N625 billion’