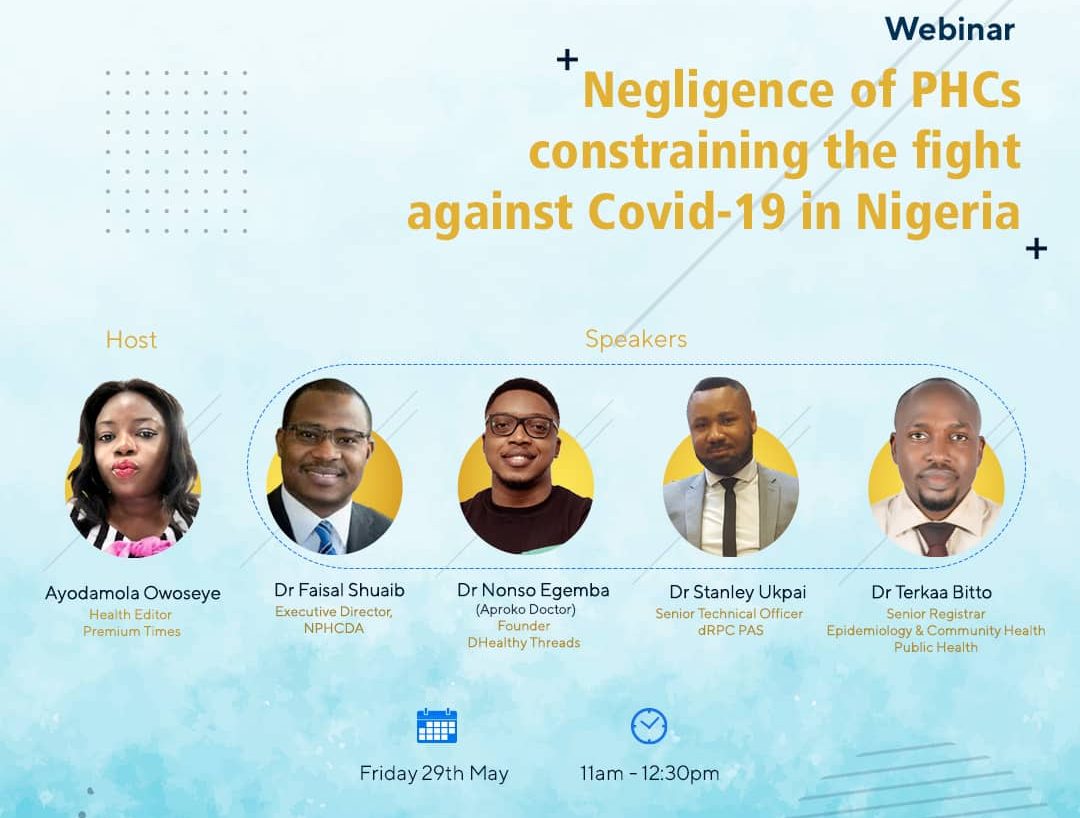 The minimum standard of a primary health care centre in Nigeria as laid out by the Federal Government includes good infrastructure with functioning equipment, human resources and equitable service provision for every patient.

However, it is a well-known fact that primary healthcare centres (PHCs) in the country are far off this mark because of poor funding of the system.

This lack of funding comes despite the known benefits of having robust PHCs. Evidence shows direct links between good primary health care facilities and good health indicators. Hence, we can say PHC’s are foundational in any country’s healthcare delivery system.

It is for these reasons that there have been many calls for the strengthening of PHCs in Nigeria. These petitions are grounded in the global movement toward Universal Health Coverage (UHC), the notion being that PHCs can bridge health inequality and provide ‘health for all’ by being an accessible first line of treatment for most. Moreover, Nigeria is among the many countries to have committed to the 2018 Declaration of Astana, which called for investment in strengthening primary healthcare services.

It is in consideration of the preceding that Premium Times Centre for Investigative Journalism (PTCIJ) Health project along with Udeme, a socio-accountability project, held a webinar on Friday May 29 with the theme: “The Negligence of Primary Health Care Centres (PHCs) Constraining the Fight Against Covid-19 in Nigeria.”

The topic of this virtual meeting is particularly important amidst the ongoing COVID-19 pandemic. In truth, primary healthcare facilities are at the core of this pandemic in Nigeria as the first point of contact for sick persons. Hence, PTCIJ deemed it relevant to have this discourse on funding for PHCs and in doing so, explore how PHCs can best be maximised in the country to curb the spread of Covid-19. Given the outbreak, one would expect access to services to be scaled up at the PHCs. But to the contrary, service provision has dropped in a majority of them.

A study by PACFAH@Scale highlights this. In Kano, Kaduna and Niger, the research examined if facilities were running at an optimum level during the pandemic. Their findings revealed that in Niger State, only about 67 per cent of PHCs were providing the same services as before. In essence, the state incurred a 33 per cent disruption in services since the rise in Covid-19 cases in the country. Similarly, PACFAH@Scale found that a half of the PHCs in Kaduna were operating as they were before the pandemic. The research conclusions show Kano to have the highest rates of interruptions as only 43 per cent of PHCs sustained services, meaning that Kano experienced a 57 per cent disruption.

We already established the importance of PHCs during this period, so one cannot help but wonder the vast implications of these disruptions. After all, these are essential services. What would life look like without the fundamentals such as routine immunisation and family planning? What happens to couples seeking antenatal services at this time?

PACFAH@Scale also assessed the impact of the Covid-19 pandemic on use of PHCs. Interestingly, they discovered that PHCs that hitherto received high volume of patronage saw lesser rates in all the states above. This observation is noteworthy because PHCs are critical to heightening Covid-19 responses in the country. Moreover, evidence suggests that proper utilisation of PHCs in the pandemic is essential in disease control. PHCs can help boost Covid-19 detection, promote health to prevent further spread and reduce the burden on tertiary health facilities, while sustaining other essential services such as routine immunisation and deliveries. Conversely, Nigerians are reportedly avoiding their primary healthcare facilities at a time when they need them most.

PACFAH@Scale, in their study, remarked on preceding. It would seem that there is also a preference for PHCs with model facilities over the average neighbourhood pharmacy. This observation was per healthcare centres with the least number of clients. “They [members of the community] were willing to go to better-equipped facilities than the one they had in their area,” Dr Ukpai stated. While this explained why the facilities had lower patronage, it also highlights the need for better funding and equipping of PHCs.

“This virus that causes Covid-19 can be curbed, and the PHC is central. When PHCs are effectively functioning, we can win this battle,” Mr Bitto said. He also emphasised that “PHC can function at all the levels of prevention. They help in health promotion activities and specific protection activities.”

Poor funding as an indication of PHC negligence

The Zonal Intervention Budget, a source of funding meant to revamp PHCs in the country, was referenced several times at this webinar. It consists of five billion naira over the last five years, allocated to this budget with this sole purpose in mind. But to the contrary, all available evidence points to the inefficiencies of Nigerian PHCs.

Mr Garba from NPHCDA when asked if the funding from this zonal intervention budget has been able to translate into quality health, commented that “it can not be seen, because it is not understood.” He explained further: “PHCs are poorly understood and because it is poorly understood it is, therefore, poorly prioritised and this poor prioritisation has its consequence of poor funding.” He added, “the provision of the infrastructure, human resources, equipment, consumable and all other requirements to have functioning primary healthcare are primarily the functions of the state and local government.”

“Over the years, there have been four major reasons why the funds are not making an impact.” Mr Garba listed the barriers as follows:

mopping up of funds at the closure of the fiscal year

poor engagement of state, local government and communities to determine the availability of human resources and funding to manage the facilities.

To rectify this, he suggested that states and local governments should take more active roles by allocating funds toward “their facilities” as he puts it. Mr Garba said, “the zonal intervention fund cannot be the primary source of funding.”

Indeed the zonal intervention fund from the inception in 2001 was intended as a “complementary fund.” He asserted that “the states and local governments have folded their arms and are waiting for the federal government to support their PHCs.” This attitude, he remarked, is not a progressive means to strengthen our PHCs.

Another recommendation put forth by Mr Garba is in the attitude of Nigerians. He urged that “PHCs be seen as an economic investment. PHC should also be seen by the public as a priority and accordingly make political decisions for their health.”

While giving his closing remarks, Mr Ukpai said: “I must say we must work to maintain the momentum from all of the investments in PHCs and for UHC. We as CSOs will keep measuring the impact and translate it to the government as well as hold the government to account.”

PACFAH@Scale called, first, on the government to release funds promptly when it concerns PHCs strengthening measures. This measure, according to mr Ukpai, will make the difference between Nigeria’s future disease preparedness. They also urged the government to consider budget revision for 2020. They then called on NPHCDA to continue to carry out training for primary healthcare workers. For media monitors, they must continue to amplify the issues with their platforms and bring awareness to both the government and people. Lastly, they called on citizens to become more aware of their right to health.