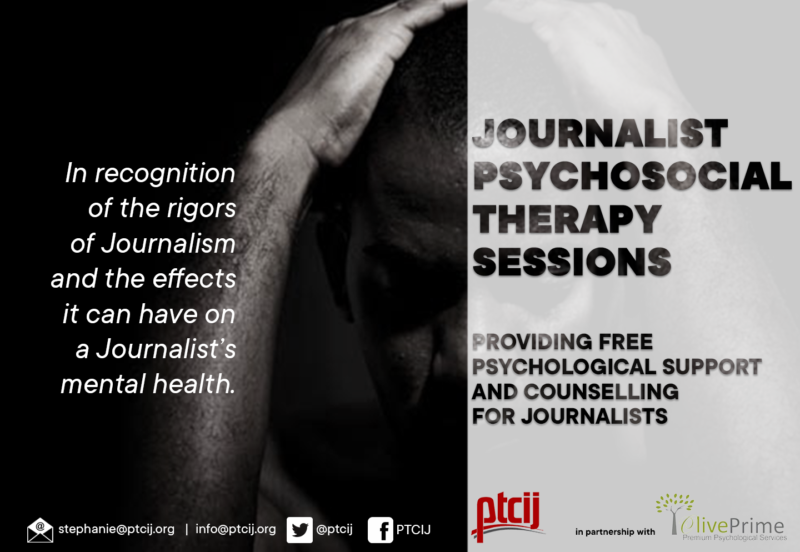 How being a journalist in Nigeria can impact mental health

Recognising the rigours of journalism and the effects it can have on journalists’ mental health, Premium Times Center for Investigative Journalism (PTCIJ) has continued to push the discussion on the need for a holistic approach to the welfare of journalists that addresses both the body and the mind with its Journalists’ Psychotherapy Sessions initiative.

Under the initiative, PTCIJ has partnered with The Olive Prime Psychological Services (TOPPS) to expand access to mental health facilities (diagnosis and treatment) for journalists, starting in Abuja.

The initiative creates a forum to talk about mental health as it affects the journalist and provides therapy from certified psychiatrists for participating journalists.

Journalism in Nigeria is characterised by all these predisposing factors for occupational hazard as they are constantly faced with deadlines, overflowing email inboxes every morning, long hours, coupled with poor salaries and benefits and oftentimes no pay at all.

Conversations on work-related stress are important as it can manifest itself in numerous symptoms of physical fatigue, muscular tension, headaches, heart palpitations, sleeping difficulties such as insomnia and psychological symptoms of depression, anxiety, discouragement, irritability, pessimism, feelings of being overwhelmed and inability to cope.

Work-related stress is a ‘silent killer’ if it is not addressed, judging from the seriousness of its symptoms.

In Nigeria, health packages for newsroom employees are woefully inadequate or outrightly non-existent and given the lack of recognition of mental illness, such packages do not include mental health treatment.

Yet the perception remains that stress is part and parcel in the field. One can go as far as to say it is even normalised as evidenced by the National Union of Journalists which states: “journalism has – and probably always will be – a job associated with work-related pressure and, while the industry is going through a period of change and, in some areas, decline, this is likely to be particularly true”.

A noteworthy book by Mark Masse entitled ‘Trauma Journalism: One Deadline in Harm’s Way,’ which chronicled journalists’ experiences of covering catastrophes worldwide, makes a similar point. Masse attributes journalism’s detached culture for the suffering of news media workers without the benefits that debriefings and counselling will provide.

Psychiatrist Anthony Feinstein, a researcher focused on the impact of trauma on journalists said: “resilience in the face of adversity is not, however, synonymous with immunity”. These notions around journalism are extremely dangerous and unconstructive as it can undermine the process of acknowledging mental health issues, thus making affected journalists suffer in silence.

The journalists most prone to suffering are those who cover stories of insecurity, protests, conflict, crime, natural disasters, corruption and government mismanagement which puts them in harm’s way. However, even journalists who do not engage in the former are being threatened, abducted, brutalised by public officials, having their cameras smashed, attacked by communities and traumatised by the visual and verbal accounts of inhumanity they report on daily in Nigeria. According to Reporters Without Borders, in 2018, 348 journalists were detained worldwide with some of the detainees subjected to physical torture, extreme isolation and other mistreatments.

There are few available reports of the impact of the job on the mental health of journalists, especially in Nigeria. The 2009 analysis conducted by the Dart Center for Journalism and Trauma at Columbia University, New York reviewed more than two dozen studies of journalist, all over the world, that were conducted between 2001 and 2014 and found that a striking 80 per cent to 100 per cent of journalists have, in some way, been exposed to work-related traumatic events that potentially pose a “risk for long-term psychological problems, including PTSD, depression and substance abuse.”

Such events may include fires, murders, disasters, war and mass casualties. It is also worth noting that this analysis identified psychological distress in journalists outside the newsroom who cover such stories but also journalists in the newsroom who are equally exposed to this content. The Dart Center analysis found that those, especially at risk of mental health-related issues, are foreign correspondents and freelance journalists covering war, disasters and conflict. This is explained by their absence of access to support especially for freelancers. All of this indeed underscore the need for the inclusion of psychiatric service as part of the welfare package of journalists.

This is a sector with no operational salary scale, the media in Nigeria sits in the informal sector with high job insecurity.

The issue of remuneration of Nigerian journalists is a crucial one. Reports abound of journalists in Nigeria getting paid not nearly enough or not at all with their salaries withheld in certain media houses.

The culmination of these welfare-related issues and the nature of the work environment of journalists combine to lend credence to the need for psychosocial support of journalists.

The overall welfare of journalists, including better salaries and benefits such as comprehensive health insurance, life insurance and other such benefits, is a topic which PTCIJ has already engaged. The organisation has organised town hall meetings and other gatherings under the campaign slogan ‘Journalist Welfare Matters’ to foster discussions among key stakeholders including the National Union of Journalists (NUJ), media owners and media practitioners.

Bruce Shapiro, the executive director of the Dart Center for Journalism & Trauma said in a speech in 2010 that “Journalists are a resilient tribe… but we are also vulnerable to psychological injury, no less so than firefighters, police officers, paramedics, or soldiers—and we need training, psychological support, and leadership aware of these issues”.

In Nigeria, journalists are human rights defenders; they are the public’s conscience and committed watchdogs. When journalists are healthy they are better able to perform these functions. The WHO notes that a workplace such as one which seeks to promote mental health and support people with mental disorders see unquestionable benefits in the form of increased productivity, reduced absenteeism from mental distress and an overall benefit from associated economic gains.

The Psychotherapy Sessions for Journalists provides counselling which helps to recognise symptoms of psychological imbalance, promote mindfulness and lead to journalists who are better equipped to manage their workload in spite of a high-stress work environment.

There is still more that must be done to address the occupational hazards of the journalistic profession in Nigeria. While many are focusing on increased and formalised remuneration a related and perhaps equally important issue is the need for mental health support and more media houses should follow the lead in addressing this need.

CAN re-elects Ayokunle as president

Why Wike, other politicians are attacking Nigerian army – Official