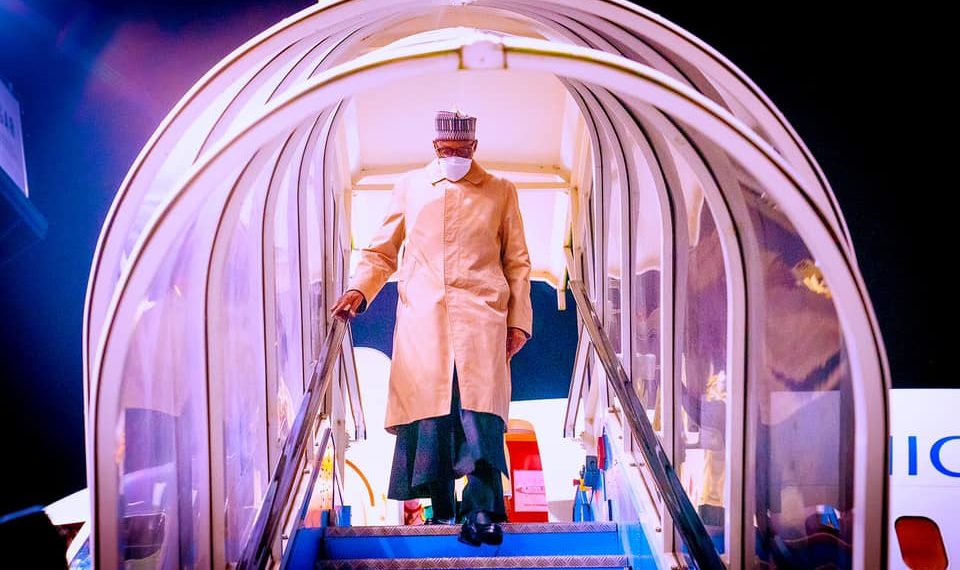 Less than 15 weeks after President Muhammadu Buhari returned from London where he had gone to receive medical attention, he has returned to the UK for “a summit and scheduled medical follow-up.”

As usual, Mr Buhari’s publicists did not disclose what the medical follow-up is for, only noting that the president will be in the UK until the second week of August.

The latest medical trip to the UK is Mr Buhari’s seventh since he was first sworn into office on May 29, 2015.

In effect, therefore, for every ten days Mr Buhari has been in office as Nigeria’s president, he has spent one day in London for health treatment.

Last week, Mr Buhari’s spokesperson, Femi Adesina, was asked on Channels TV if the well-funded Aso Rock clinic could not cater for the medical needs of the president, his response was that “President Buhari has used the same medical team for about 40 years.”

He added that: “Once you can afford it, it’s advisable you stay with the team that has your medical history.”

The Nigerian leader, who coasted to a historic victory in 2015, took his first vacation only eight months after coming to office. He spent six days in London between February 5 and 10 in 2016.

His second medical trip came on June 6, 2016. He travelled for 10 days to England, seeking further treatment for an ear infection. The president extended his trip by three days before coming back on June 19, 2016.

By January 19, 2017, Mr Buhari wrote to the Nigerian Senate, one he had a frosty relationship with at the time, disclosing his intention to travel abroad on a 10-day vacation and that he would hand over to Vice President Yemi Osinbajo.

Although the letter said he would commence the vacation on January 23, 2017, Mr Buhari departed Nigeria on the same day he wrote the lawmakers.

On March 10 of that year, exactly 50 days after his departure, Mr Buhari returned but was not able to resume work immediately.

Less than two months after, the president embarked on another trip to London for another medical checkup. Although his aides would not confirm what he was treated for, they urged Nigerians to pray for him.

Mr Buhari returned after 104 days, amidst misinformation about the true state of his health.

A year after his longest trip yet, Mr Buhari travelled to London in May 2018 for a “four day medical review.”

Towards the end of March, this year, the president flew to London to take “a short rest” – one that lasted for 15 days and which the presidency had earlier described as “routine medical check-up.”

While in the UK in April, resident doctors in Nigeria, commenced an indefinite strike due to the nonpayment of some allowances.

Nigeria’s resident doctors are also on strike at present, while the president is in the UK on a medical trip.

READ FULL STORY HERE: TIMELINE: Buhari has spent 10% of his time in office in UK for treatment

TIMELINE: Buhari has spent 200 days in UK for treatment since assuming office

Want to know about vaccine rollouts in Africa? Click on a country here and find out

INFOGRAPHICS: Despite govt actions, 4,000 children died from malnutrition in Jigawa