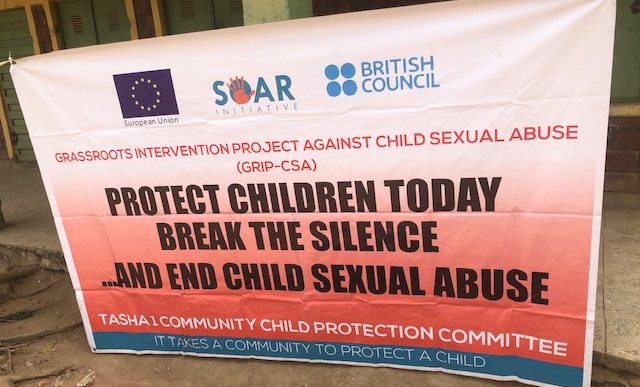 How local initiative is taming sexual abuse in Abuja communities

Last Friday, advocates against child and sexual abuse in Nigeria commemorated the first year, a community-based-approach to curb such menaces took off in four rural communities in Abuja.

The event, attended by government officials, community members and health advocates, was organised to take stock of how the initiative fared, its progress and limitations one year on.

Launched by the Sexual Offences Awareness and Response (SOAR) with funding from the European Union under the rule of law and anti-corruption programme – RoLAC, the initiative was aimed at breaking the endless cycle of sexual and violent crimes against women and children.

It is a team of young men vested with responsibility to monitor, investigate and report incidents of rape and sexual crimes to appropriate authorities.

Due to their vulnerability, a mentorship programme, aimed at grooming children to become advocates of child sexual and violent abuse, was set up as the second approach.

PREMIUM TIMES previously reported the installment of the CCPC in Tacha1, Kayarda, Wukara and Wuna communities all within Abuja and also reported how the mentorship programme is grooming teen advocates against sexual violence.

Despite considerable effort towards prevention and prosecution, there is still a high prevalence of sexual and violent crimes in Nigeria and justice for rape victims is seldom within reach, advocates say.

Nigeria has an extremely low conviction rate for rape and sexual abuse, despite an increase in violence against women. But the shortcomings in Nigeria’s legal system is just one of the challenges facing survivors.

Many more cases of rape and sexual crimes are undocumented, unheard, and unreported in rural communities, where lifesaving service providers such as hospitals, support centres, and the police are out of reach.

At the event, several stories on how cases of sexual violence and abuses were identified, investigated and reported through the community-based initiative were shared.

Leaders in the various communities narrated how the initiative aided in reducing incidents of sexual assault.

Several challenges and limitations to the progress of the programme were also highlighted.

Chinyere Eyoh, a rape survivor, is the founder of the SOAR initiative. She began the advocacy against sexual crimes in 2011.

Speaking at the event, she said about 12 cases of sexual assault were handed over to the police through the initiative in the past one year.

“The CCPC and the mentorship programme is voluntary. We allow the community members to choose who they want to serve. We collaborated with the three area councils in Abuja where the four communities are located. Naturally, they are duty-bound to create such initiatives,” she said.

Mrs Eyoh said so many other cases did not make the appropriate channels such as police and or NAPTIP because some community members did not fully cooperate.

“Sometimes, they will want you to pay them for what they are the ones to benefit from. This is because they don’t have a full grasp of the situation.

“There were incidents that were reported to the police but could not be followed through because some parents or guardians restrict their wards/children/victims from speaking,” she said.

Mrs Eyoh said SOAR will be pulling out from coordinating the programme to allow local leaders to fully take over.

The chief of Wuna community, Yusuf Isah, said since the programme kick started, cases of sexual abuse reduced in the area. He said he will ensure that the initiative is sustained with his statutory power.

The country head of RoLAC, Toyosi Giwa, described localised strategies in the fight against sexual abuse as the bedrock of all response efforts.

“The best bet is to approach the problem locally as you can see with the programmes in the Abuja communities. Residents are giving positive reviews,” she said.

“When this process starts at the community level, it generates more impact and that is why we are supporting SOAR to build capacity of community members into leaders and watchdogs checking sexual abuses.

“Through the mentorship programmes, teens were trained to know the different types of abuse, recognize the signs and know the appropriate channels to report incidents.”

“There are laws in place that prescribe what type of punishment to perpetrators and specific compensations to victims but the problem has been implementation and enforcement.”

A week before Friday’s event, a dialogue session was held in Tacha1 village, one of the designated communities.

The dialogue session was an avenue for residents and advocates to share ideas on how locals will continue with the initiative independently, according to Johnson Ameh, SOAR’s community engagement officer.

“We are officially handing over the running of this initiative to the community so they can continue from where we stopped,” he said.

“The idea is to establish a local system that can track sexual violence and break the chain of silence. The most important thing is for the committee members to be dispassionate in monitoring and reporting cases without any form of bias even after we have left.”

Baba John, the chief’s secretary and a CCPC member explained how the community is making plans for the continuity of the program.

“Since this program started, we have stopped hearing stories about sexual abuse in the community. We the community members must mobilize ourselves to continue the program”, he said.

“After this event, my duty is to sit down with the chief and explain to him why we need to continue with this program. It is now our responsibility.

“We will also discuss with neighboring communities and let them know about this initiative so when cases of sexual abuse come up, they can report to us and we will take it up.”

John however said the challenge they will face is funding. “Most of the CCPC members that started with us have left because they are not being paid. It takes passion to do a job you are not getting a reward from”.

Mr Ameh said SOAR will from time to time provide guidance and assistance to communities where the initiative has been instituted to ensure sustainability.

Children who received courses on issues such as sexual and child abuse, HIV and breaking a ‘culture of silence’ were less likely to be a victim of rape — or a perpetrator, according to a recent Human Science Research Council survey in Africa.

Ruth Nwafor, a thirteen-year-old junior secondary school student, is one of the many children in Tacha1 who graduated after undergoing the mentorship program.

She and many other graduates took turns to share what they learnt from the program after the dialogue session.

“I now know the different forms of sexual and child abuses and the different techniques used by the perpetrators,” Ruth who is aspiring to become a nurse said.

“I have nine siblings who I am now teaching how to avoid people trying to take advantage of them. I am no longer scared to speak up.”

Rosaline Nwafor, Ruth’s mother, said she’s happy about the level of awareness her daughter has been exposed to.

One of the mentors, Happiness Onah who also teaches in a private school in the community, said she expects children who went through the program to teach their peers who did not have the same opportunity on ways to speak up against sexual violence.

“With the consent of parents, we enroll about 80 children and train them for a month. When they graduate, we enroll another set. We go from home to home to sensitize parents on the need to release their kids”, she said.

Samuel Okereafor, another mentor who is also a teacher, said he volunteered to train the children because of his passion to stamp out sexual violence against children in the community.

FA Cup Throwback: How Amokachi sent himself on against Spurs in 1995