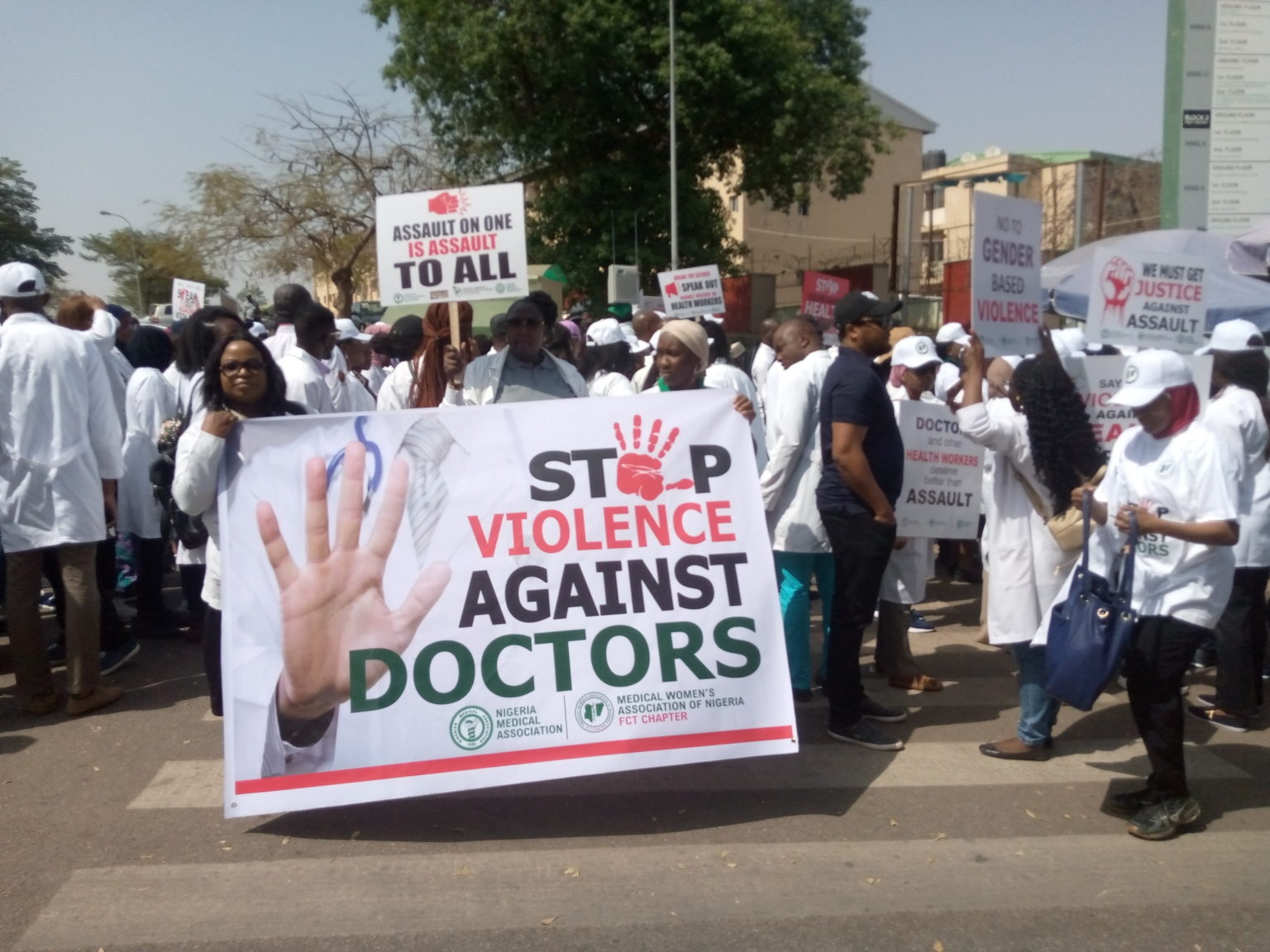 The Association of Resident Doctors (ARD) and other health workers on Thursday embarked on a peaceful protest walk in Abuja to express their grievances over rising incidence of assaults and violence on its members.

The News Agency of Nigeria (NAN) reports that the protesters took a walk to the office of the FCT Minister over incessant attacks, assaults and violence meted on medical doctors and other health workers by relatives of patients.

The protesters carried placards with several inscriptions, including: “We Care for You Why Beat Us’’, “Better Securities in our Hospitals’’, “Say No to Violence Against Health Workers”, “Doctors and Health Workers deserve Better’’.

The doctors had on Wednesday embarked on a three-day warning strike across FCT general hospitals over recent assault and stripping naked of a female doctor by relatives of a deceased patient in Maitama District Hospital, FCT.

Addressing the protesters, the FCT Minister of State, Ramatu Aliyu, appealed to the doctors to call off the strike as the authority was already addressing the issue, which will bring an end to all forms of assaults on all persons.

“I appeal that you call off the strike and just give us the benefit of the doubt and see what will be done in the shortest time. I will come personally and talk to all hospitals in the FCT to know whatever challenges you are facing there.

“We appreciate your patience and understanding that you didn’t take laws into your hands and we assure you that the issue is receiving attention your demand is taken seriously and given utmost attention.

“Violence is not acceptable whether on male or female at the FCT or anywhere else in the country,’’ she stressed.

She said the FCT will synergise with the ministry of health, information and culture and other stakeholders towards educating the public towards imbibing the right attitude and culture of law abiding citizens.

While calling on them continue their duties in providing medical care and attention to the public, the minister assured them of their safety and protection, while discharging their duties.

The FCT Chairman, Nigerian Medical Association (NMA), Ekpe Philips, said the association was pursuing through the National Health Act or Bills jail term for any person that perpetrate any form of violence on health workers.

“We are pursuing through the National Health Act or through the bills, we will make sure that if there is violence against any health worker, there is a particular term of jail to serve for such persons.

“We are advocating that there should be an undertaking by the patients that the relatives would not show any violence against health workers in Nigerian hospitals again.”

Also, the International President of Medical Women International Association (MWIA), Eleanor Nwadinobi, decried the series of attacks meted on health workers, which she said was a threat to their life and profession.

“There should be no hiding place for perpetrators of this type of violence. It is important that we feel safe, while discharging our duties.

“This is Nigeria, FCT in particular, where the 2015 violence against Persons (VAP) Acts was passed and signed.

“We are here today to speak clearly and to say no more should this happen to any of us in the line of duty and we expect justice to be done to our colleague and she should have all the support she needs,’’ she said.

On her part, FCT President, Medical Women Association, Aisha Umar, stressed the need for relatives of patients to exercise decorum, rather than inflict injuries on medical workers discharging their duties.

“It is wrong for patients relative to take out their anger while expressing their grievances on the doctors or health workers; many doctors have left, we are the ones left behind, so we should not be treated that way,” she said.

The FCT President, ARD, Roland Aigbovo, said the association would hold an emergency congress to address the issues on calling off the strike as appealed by the federal government.

Buhari felicitates with Bisi Akande at 81