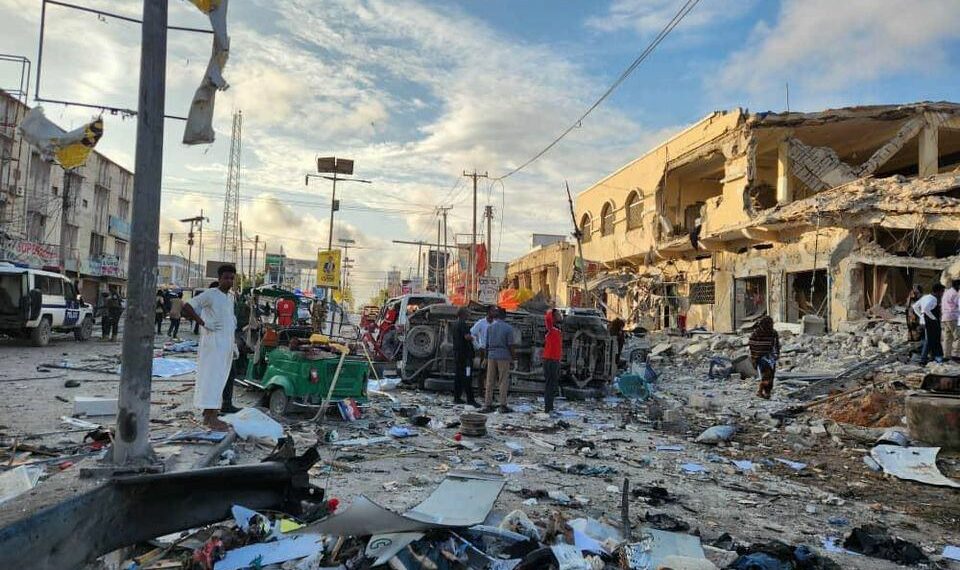 Scene of the Car Bomb In Somalia

The two car bombs exploded in the same location where the October 2017 attack which killed over 500 people occurred.

The African Union has condemned in “strongest terms” the Saturday terrorist attack that killed 100 people in Mogadishu, Somalia.

“The Chairperson of the African Union (AU) Commission, Moussa Faki Mahamat, condemns in the strongest terms the horrific terrorist attack that killed more than 100 innocent civilians and wounded many more in Mogadishu, Somalia, on 29 October 2022,” the AU said in a statement.

About 100 people were killed on Saturday after two car bombs exploded near Somalia’s education ministry.

According to a video posted on the official account of Somalia’s President Hassan Mohamud, more than 300 others were wounded in the attack.

Mr Mahamat in the statement condoled with the families of the victims and wished speedy recovery to the injured.

The AU, he noted, is determined to support the Somali government and people in their efforts to achieve sustainable peace and security in the country.

“The Chairperson reiterates his appeal to the international community to redouble its efforts to ensure robust international support to Somalia’s institutions in their struggle to defeat terrorist groups in order to consolidate the key security gains made in recent years,” the statement said.

ALSO READ: ANALYSIS: Is AU mission in Somalia changing in name only?

Mr Mohamud claimed the al-Shabaab terror group in Somalia was responsible for the attack.

“Today’s cruel and cowardly terrorist attack on innocent people by the morally bankrupt and criminal al-Shabaab group cannot discourage us but will further strengthen our resolve to defeat them once and for all,” Mr Mohamud wrote on Twitter.

“Our government and brave people will continue to defend Somalia against evil,” he added.

The Islamist group al-Shabaab has claimed responsibility for the attack, according to an NPR report. The terror group said the country’s ministry of education is an enemy for receiving support from non-muslim countries who want to remove Somali children from the Islamic faith.

The two car bombs exploded in the same location where the October 2017 attack which killed over 500 people occurred.

“By the will of God, no other October like this will happen. They won’t get the chance to commit such a thing,” CNN quoted Mr Mohamud as saying.

Billed to attend mining event to show Abuja is safe, Buhari jets out to UK