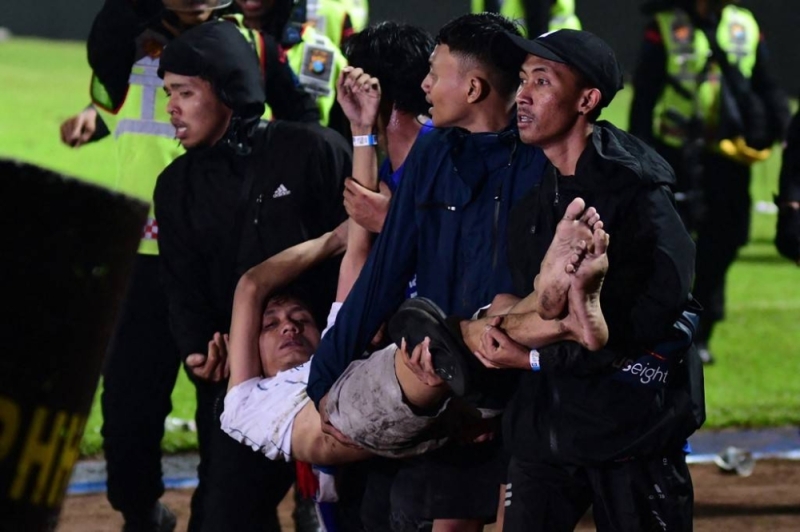 An injured football fan being carried out of the stadium by emergency responders [PHOTO: Malay Mail]

East Java police chief Nico Afinta said people died after being crushed and suffocated as they ran towards the same exit in the stadium.

Over 174 fans have died in a stampede at an Indonesian Premier League match between Arema FC and Persebaya Surabaya.

Hosts Arema were beaten 3-2 at the Kanjuruhan Stadium in Malang on Saturday, and that led to unrest between the rival fans.

Attempts by the police to disperse rioting fans led to the use of tear gas but rather than mitigating the issue, it led to more calamities with several lives lost and many more injured.

East Java police chief Nico Afinta said people died after being crushed and suffocated as they ran towards the same exit.

Around 180 more people were reportedly injured with Mr Afinta stating that 3,000 of the approximately 40,000 spectators in attendance had invaded the pitch, initiating “riots”.

It was initially reported that about 130 people had lost their lives, but officials later confirmed the death toll had risen.

The Football Association of Indonesia said it has launched an investigation into the cause of the incident and has also banned Arema from hosting games for the remainder of the season.

All remaining Liga 1 matches due to be staged this weekend were suspended following the tragedy.

The President of Asia football federation (AFC), Salman Al Khalifa, said: “I am deeply shocked and saddened to hear such tragic news coming out of football-loving Indonesia and, on behalf of the AFC and the Asian football family.

“I send our heartfelt condolences to the families and friends of the victims, while expressing our speedy recovery wishes to the fans who have been injured in the incident and support to the Football Association of Indonesia and the clubs.”

Indonesia is scheduled to host the Under-20 World Cup in May and June but it is unclear if this latest development will in any way make FIFA review the situation.

“We’re sorry for this incident. This is a regrettable incident that ‘injures’ our football at a time when supporters can watch football matches from the stadium,” Indonesian sports and youth minister, Zainudin Amal, told Kompas.

“We will thoroughly evaluate the organisation of the match and the attendance of supporters. Will we return to banning supporters from attending the matches? That is what we will discuss.”

There was also a stampede earlier this year during the Africa Cup of Nations in Cameroon.

The stampede left at least eight people dead and more than 35 injured, according to officials.

Crowds attempted to enter the Yaounde Olembe stadium, which has a capacity of 60,000, to watch the host nation beat Comoros 2-1 and reach the quarter-finals when the stampede happened.