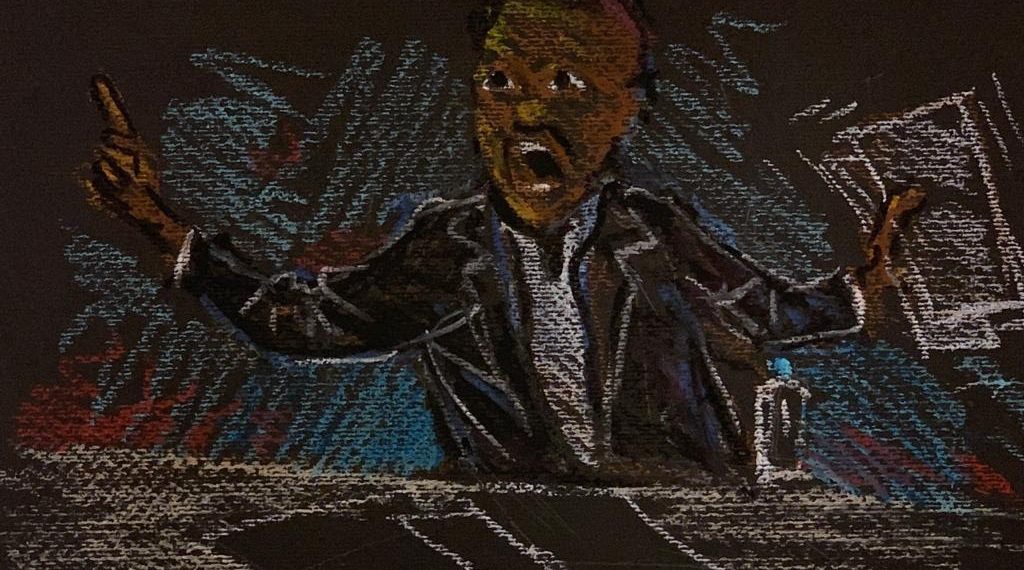 Alieu Kosiah shouts in the Swiss Federal Criminal Court at the start of his trial in December 2020. New Narratives/Leslie Lumeh

Alieu Kosiah has demanded the Swiss Federal Criminal Court pay him 1,356,000 Swiss Francs (US$1.458 million) for compensation for the six years he has spent in detention awaiting this trial and for the emotional and reputational toll the charges have taken.

“The long, unjustified detention to which he was subjected demands compensation,” Dmitri Gianoli, Kosiah’s lawyer, told judges on Thursday in his second day of closing arguments.

Mr Gianoli said the money would go toward “reparation for moral injury, serious injury to [Kosiah’s] personality due to the disclosure of his identity in the press, because of his harsh conditions of detention having induced back pain.”

He put the cost of his defence of the war crimes suspect at 300 Swiss Francs per hour for 6 years, or over $US1m.

On Tuesday, the seven Liberians who are Mr Kossiah’s accusers in this case also asked for more than $US8500 (LD1.5 million) each in compensation but their request is only for legal formalities.

Plaintiffs are required to claim compensation in a civil action in Switzerland whether or not the accused can pay.

Mr Kosiah does not have any money to give them. However, Mr Kosiah’s claim is against the Swiss State and he will receive the money if he wins the case. The trial ends on Friday and the verdict expected to be announced later this month.

He denies the accusations, saying he was not in Lofa County between 1993 and 1995 when the alleged offences were committed even though two of his own witnesses put him in the area at the time.

Mr Kosiah has been vocal about his lengthy pretrial detention—highly unusual in jurisdictions that protect the rights of accused to be treated as innocent until they are proven guilty.

He was remanded in November 2014 and has been detained ever since. Mr Kosiah yelled in court on a number of occasions. Human Rights Watch and other groups have also criticized Swiss authorities over the long detention.

Mr Gianoli was optimistic in his proceedings, telling the court he would only take 30 seconds to respond to all four lawyers representing the plaintiffs’ when they conclude their arguments on Friday.

“Neither the prosecution nor the proceedings have provided proof of Kosiah’s guilt,” Mr Gianoli said. “We are in a word-for-word situation as far as I have shown he is not there,” he said. “And even if he had been there, how could he be guilty of the continually changing versions of the plaintiffs? He must be freed from all penalties.”

Mr Gianoli reemphasized that Mr Kosiah was not in Lofa between 1993 and 1994, Kosiah’s key defence in this trial and that the plaintiffs are mistaking him for another person.

“Alieu Kosiah must be acquitted of all charges because he was not there,” he told the three-judge panel hearing the case. “The Liberians (plaintiffs) have lived everything without being present, have known everything without knowing. Kosiah is not the ULIMO group. He can only speak as a person.”

Mr Gianoli continued pointing out contradictions in the plaintiffs’ complaints and testimonies as he had done the day before. This time he was even more pointed, listing the inconsistencies with all the plaintiffs and the prosecution witnesses.

During their testimonies, the plaintiffs and prosecution witnesses admitted to changing details in their initial complaint or pretrial investigation.

Some of the contradictions include descriptions of Mr Kosiah’s gun, the complainants’ dates of birth and the exact towns where some of the alleged offences occurred.

Alain Werner, the lawyer of four of the plaintiffs, told New Narratives in an interview outside the court the inconsistencies Mr Gianoli points out were because of human errors and do not hurt their case.

“In our view, on the contrary, it is proof that their testimonies were very genuine, they did not fabricate stories,” he said, adding that the contradictions were also due to language and cultural differences. “In our view, Mr Kosiah and his lawyer did not explain what could be the motive [of the plaintiffs lying against Kosiah].”

Judge Jean-Luc Bacher will announce the date of the verdict following the conclusion of the legal argument in the case.