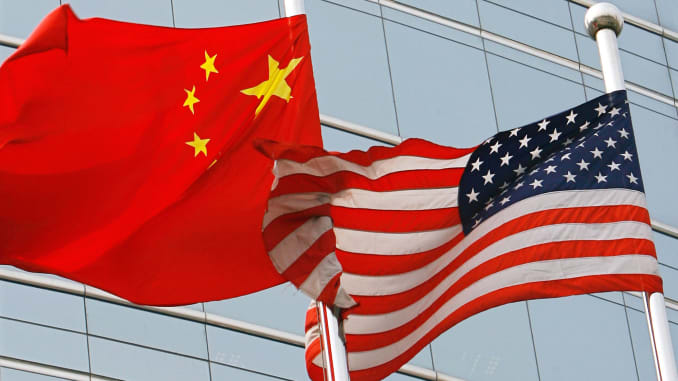 Flags of U.S and China

The U.S. and China are set to sign the first phase of a trade deal on Wednesday that includes steps to resolve a nearly two-year trade war but leaves some of the thorniest issues unresolved.

The agreement staves off some punitive U.S. tariffs on Chinese goods and has Beijing commit to end its practice of forcing foreign companies to disclose their technology, according to the U.S. trade representative.

Under the agreement, Washington says Beijing will increase its imports of U.S. products by at least 200 billion dollars over the next two years.

Neither side has released specifics of the deal.

The “phase one” deal leaves in place Washington’s tariffs on 370 billion dollars’ worth of Chinese imports, while reducing the tariff rate on some of those goods from 15 to 7.5 per cent.

It is unclear when representatives will negotiate a “phase two” deal or when they will rescind their tit-for-tat tariffs.

Analysts say that some of the most difficult issues in the U.S.-China trade relationship remain unsolved.

“We are not likely to see in this agreement any provisions addressing the key structural problems with China,” Jennifer Hillman, a trade expert at the New York-based Council on Foreign Relations said on Tuesday.

Hillman cited Beijing’s use of subsidies to “prop up” companies that flood markets with goods and drive down prices among the practices.

Senate Democratic leader Chuck Schumer said on Tuesday that the deal “is remarkable for how little it achieves at an enormous price”.

Chinese observers also feel like the deal, while halting a trade conflict that was spiralling out of control, does little to serve China’s interests.

Beijing might find it hard to purchase the set amounts of U.S. agricultural, energy and manufactured goods outlined in the agreement without alienating other countries, said Shi Yinhong, a professor of international relations at Renmin University.

“I think China has made a lot of concessions, and the implementation of the first phase of the agreement poses a considerable challenge,” he said.

Other countries have raised objections to the deal, saying it would force China to adopt a system of “managed trade” to the detriment of other nations, Joerg Wuttke, president of the European Chamber of Commerce in China, said Wednesday in Beijing.

“(The U.S.) wanted to have a real, comprehensive agreement also covering structural changes,” Wuttke said, “and they came up basically with a shopping list that China has to fulfill.”