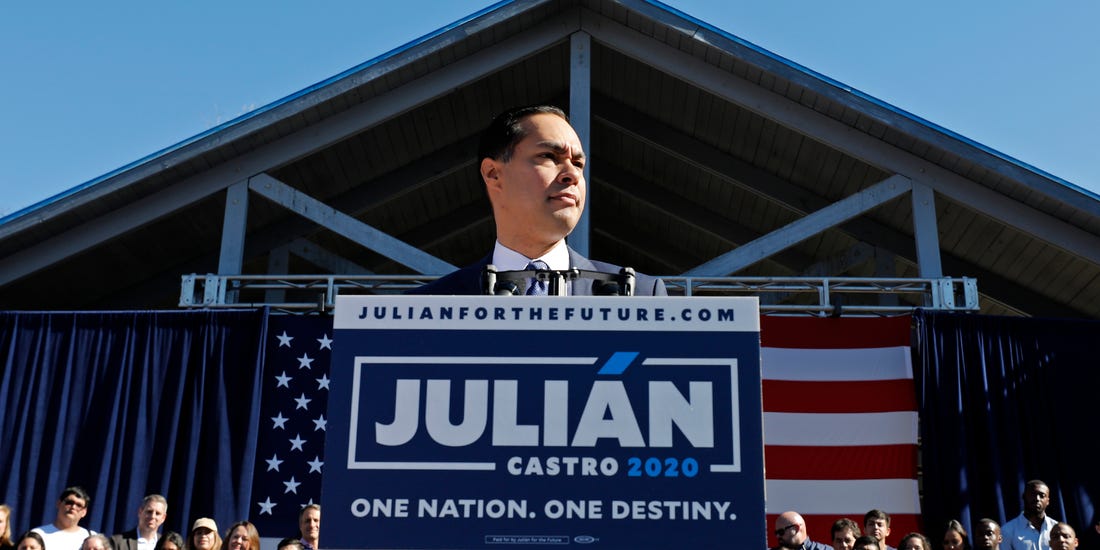 The sole Latino in the race, Castro, 45, was a youthful presence in a contest led by a trio of septuagenarians.

However, lackluster fundraising and low poll ratings left him little choice other than to abandon what was an uphill run from the start.

“It’s with profound gratitude to all of our supporters that I suspend my campaign for president today.

“I’m so proud of everything we’ve accomplished together. I’m going to keep fighting for an America where everyone counts, I hope you’ll join me in that fight,” Mr Castro tweeted.

For months, Mr Castro tried to stand out in the crowded field by striking an aggressive posture toward rivals.

“I think that you should do your homework on this issue,” he snapped.

Mr Castro turned his fire on Joe Biden over the same issue at a debate in July.

“What we need are politicians that actually have guts on this issue,” he told the former vice president.

Most memorably, at a debate in August, Mr Castro bungled an attack on Biden over healthcare.

He questioned his opponent’s memory, suggesting incorrectly that Mr Biden, then 76, was contradicting himself.

“Are you forgetting what you said two minutes ago?” Mr Castro asked, drawing a roar of groans from the audience and a cascade of criticism from Democrats far and wide.

Mr Castro emerged as a national political figure in 2012, when he was President Barack Obama’s keynote speaker at the Democratic National Convention.

Mr Castro was one of the few Democrats in the presidential race to highlight plans to reverse the nation’s surge in homelessness.

He toured a homeless encampment in tunnels beneath the Las Vegas Strip and called for a sharp rise in federal spending on housing for Americans living on the street or struggling to pay rent.

Mr Castro, whose grandmother migrated to the U.S. from Mexico, was depending on winning overwhelming Latino support as the foundation of his campaign.

Mr Castro, had he won the nomination, would have struck a sharp contrast with President Donald Trump, whose political career was fuelled by anti-immigrant rhetoric.

One of Mr Castro’s favourite riffs on the stump was to tell crowds how he would greet the outgoing president at the White House after his inauguration in 2021: “Adios.”

Malabu Scandal: Court approves detention of Adoke for another 14 days