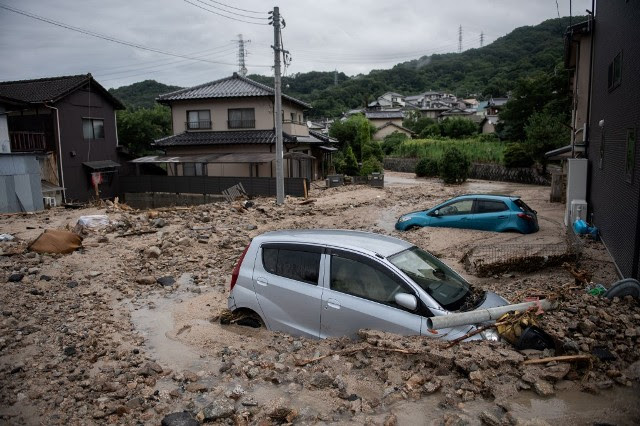 A picture shows cars trapped in the mud after floods in Saka, Hiroshima prefecture on July 8, 2018. - Japan's Prime Minister Shinzo Abe warned on July 8 of a "race against time" to rescue flood victims as authorities issued new alerts over record rains that have killed at least 48 people. (Photo by Martin BUREAU / AFP)

One dead, 810,000 ordered to evacuate as storm hits Japan

A man was confirmed dead after he was found in a car that was washed away by floodwaters in the city of Takeo on the island of Kyushu, broadcaster NHK reported, citing local police.

Two more people were feared dead in the cities of Saga and Yame on Kyushu, according to NHK.

Authorities issued evacuation orders to about 810,000 residents in the prefectures of Saga, Fukuoka and Nagasaki on the island, NHK said.

Speaking at a news conference, government spokesman Yoshihide Suga urged residents “to take steps such as early evacuation to protect their lives”.

A TV footage showed a flooded train station and residential areas in the city of Saga.

A number of train services were suspended on Kyushu, operators said.

More than 120 millimetres of rainfall were recorded in the cities of Saga and Taku in a one-hour period earlier in the day, according to the Japan Meteorological Agency. 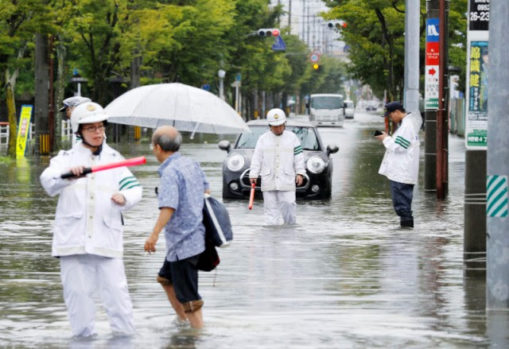 Rainfall of up to 200 millimetres were forecast for northern Kyushu and up to 150 millimetres for the regions of Hokuriku and Tokai by Thursday noon, the agency said. (dpa/NAN)