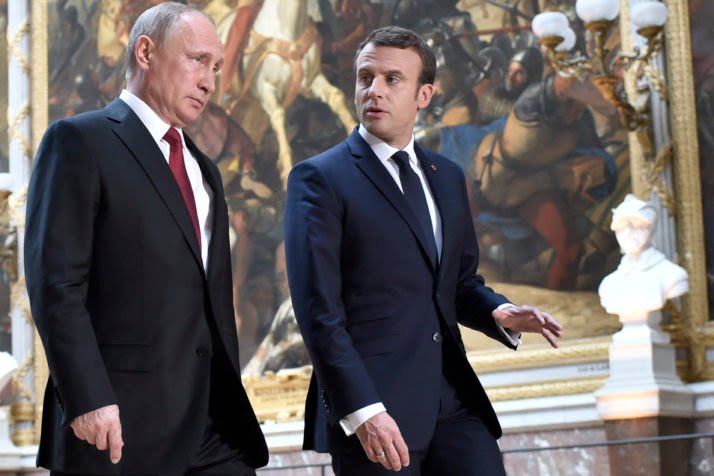 Presidents Vladimir Putin of Russia and Emmanuel Macron of France on Friday discussed the deterioration of the Syrian crisis in light with recent allegations of a chemical weapons attack in Syria’s town of Duma, the Kremlin press service said.

“The sides continued exchange of views in regard to the current situation in Syria, aggravated by allegations of the use of chemical weapons in the town of Duma.

“Vladimir Putin emphasised the need to conduct a thorough and impartial investigation, and avoid any groundless accusations against any side,” the Kremlin said in a statement.

According to the statement, the Russian president stressed that it was necessary to refrain from rash and dangerous actions that would be a gross violation of the UN Charter and have unpredictable consequences.

“The leaders instructed the respective foreign and defense ministers to maintain close contact in order to de-escalate the current situation,” the Kremlin said.

Putin and Macron also welcomed the dispatch of an OPCW fact-finding mission to Duma to investigate the alleged chemical attack.

“The presidents discussed specific opportunities for cooperation between Russia and France to assist the OPCW mission in its work,” according to the Kremlin

NAN reports that no fewer than 60 people were killed and more than 1,000 injured in Saturday’s suspected chemical weapons attack on the town of Douma, according to a Syrian relief group.

Doctors and witnesses have said victims showed symptoms of poisoning, possibly by a nerve agent, and
reported the smell of chlorine gas.

Russian UN Ambassador Vassily Nebenzia said Washington’s decision to put forward its resolution could be a prelude to a Western strike on Syria.

The Douma incident has thrust Syria’s conflict back to the forefront of the international stage, pitting Washington
and Moscow against each other once again.

Trump said that he would make a decision about how to respond within a few days, adding that the U.S. had
“a lot of options militarily,” on Syria.

Assad’s government and Russia have said there was no evidence a gas attack had taken place and that the claim was bogus.