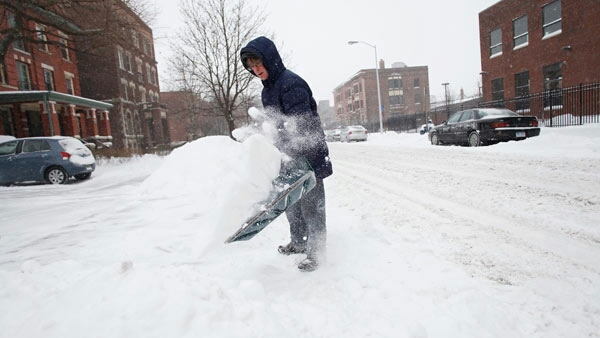 Snow in the US (Photo Credit: China Daily)

Closure of schools and offices across the U.S. have been announced on Wednesday while no fewer than 2,700 flights have been cancelled ahead of a major winter storm on Thursday, called a ‘bomb cyclone’.

The National Weather Service said many states could receive up to 12 inches of snow as blizzard conditions are expected to begin on Thursday in parts of Maine, Massachusetts and Rhode Island.

The winter storm, forecasters said, would bring temperatures colder than Mars as the temperature at Mount Washington Observatory in New Hampshire would plunge to minus 37 degrees on Friday night into Saturday.

From Maine to Florida, every East Coast state has at least one weather advisory, winter storm watch, winter storm warning or blizzard warning.
At least 12 people in the U.S. have reportedly died this week in cold-related deaths in Wisconsin, Texas, North Dakota and Missouri.

Already, many state governors have announced closure of schools and offices over the threatening hurricane-force winter with wind gusts and blinding snow.

The ‘bomb cyclone’, expected to strike Thursday, would likely dump eight to 12 inches of snow in New York and hurl 40 to 60-metre per hour gusts.
New York sanitation workers are getting ready to deploy 2,200 ploughs to help clear the streets, City’s Sanitation Commissioner Kathryn Garcia, said.
New York City Mayor Bill de Blasio announced closure of schools due to the impending snowstorm while U.S. Senate would also not vote because of the winter storm.

Bone-chilling cold, intense snow would usher in another round of minus zero temperatures to New York City and Philadelphia would dip up to minus 22 degrees Celsius.

In Connecticut, where the storm is expected to hit after midnight, Governor Dan Malloy urged motorists to stay off the roads if possible.

In Massachusetts, snow is expected to fall at a rate of one to two inches per hour starting early Thursday, Governor Charlie Baker said.

About 12 inches of snow are expected in Boston, as well as the eastern and central parts of the state.

In southeast Massachusetts, forecasters said the day might start with freezing rain on the Cape and the islands, while by midday, a dip in temperatures may bring snow, high winds and possible flooding from “astronomically high tide”.

Freezing rain, sleet and snow are smothering parts of the Southeast states on Wednesday while deep freeze blew across South Carolina with some areas seeing five to six inches of snow.

South Carolina Governor, Henry McMaster, said more than 13,000 tonnes of salt had been scattered across the state, warning of dangerous conditions as evening temperatures were expected to remain below freezing through next week Monday.
In Georgia, Governor Nathan Deal issued a state of emergency for 28 coastal counties ahead of the storm.

Universities in the State of Florida were closed due to the unusually frigid conditions sweeping through the state.