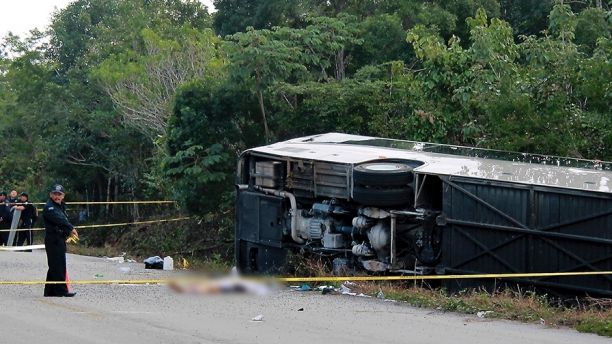 At least 12 people died and 18 others injured when a tour bus carrying passengers to Mayan ruins in eastern Mexico flipped over on a highway on Tuesday, officials said.

The bus was carrying 31 people, including tourists from the United States, Italy, Brazil and Sweden, in the state of Quintana Roo, according to Public Security of Quintana Roo.

The bus was travelling from the coastal village of Mahahual to the Mayan archaeological site Chacchoben. Chacchoben is about 110 miles south of the popular tourist destination Tulum.

Vicente Martin, a spokesman for Quintana Roo State’s civil defense office, said the nationalities of the deceased are yet to be ascertained, though as stated by him, seven Americans and two Swedes were among the injured.

Mr. Martin said investigators were working to determine the cause of the crash. The injured were taken to hospitals in Bacalar and Chetumal where five have been released.

Miami-based Royal Caribbean Cruises said in a statement that passengers from two of its ships, the Celebrity Equinox and Serenade of the Seas, were involved in the crash. The company expressed its sympathies and said it was assisting with medical care and transportation.

Part of the statement reads: “Our hearts go out to all those involved in the bus accident in Costa Maya. We are doing all we can to care for our guests, including assisting with medical care and transportation.”

Video of the crash’s aftermath showed a bus on its side in a wooded area off the roadway.

The U.S. Embassy in Mexico said officials were working with local authorities to identify the victims.

“We would want to express our condolences to all of those who have been affected by that tragedy. We know that lots of family are travelling as it is holiday time. We’re working with local authorities to help if there’s any US citizens involved that we don’t know. As at now, we don’t know how many American involved,” State Department spokesperson, Heather Nauert, said.