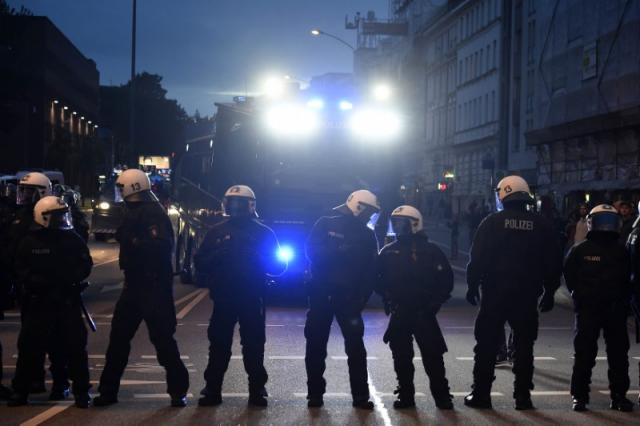 German riot police block a street during a protest at Schanzenviertel ahead the G20 summit in Hamburg, Germany, July 4, 2017. REUTERS/Fabian Bimmer

German police on Wednesday used water cannon to disperse around 500 anti-capitalist protesters overnight in Hamburg where Chancellor Angela Merkel will host leaders of the G20 leading economies in a two-day summit starting on Friday.

Tens of thousands of protesters are expected to march in the city against globalisation and what they say is corporate greed and a failure to tackle climate change.

The Interior Minister had said on Tuesday that the German authorities believe that about 8,000 demonstrators were prepared to use violence.

Some 20,000 police officers will be deployed.

Hundreds of mainly young left-wing activists gathered and marched on a main street shortly before midnight on Tuesday in the first major protest ahead of the summit.

Der Spiegel magazine reported that the Germany army fears protesters will use unarmed drones and that it has deployed a radar to locate any possible aerial intrusions.

A spokesman for the German military declined to confirm the report.

On June 20, German police unveiled a mass detention centre built in anticipation of protests against the summit.

The 11,000-square-metre centre in Hamburg’s southern Harburg district has 70 group cells and 50 single cells that can hold as many as 400 detainees, according to police spokesman Timo Zill.

A supermarket once stood at the location, which was most recently used as refugee accommodation, Mr. Zill said.

Refurbishing the venue as a mass detention centre was meant to cost three million euros (3.4 billion dollars), but Mr. Zill said it remained to be seen whether the project would exceed the budget.