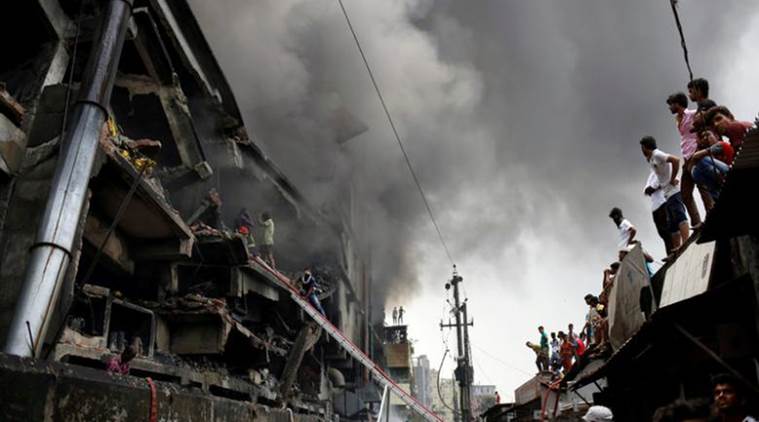 A fire service official, Palash Modak, said the mishap happened late on Monday at a plant owned by Multifabs Limited, a Bangladeshi company on the outskirts of the capital, Dhaka.

The firm supplies knitted apparel to clients in Sweden, Denmark, Germany, Russia, Spain, Netherlands and Britain, including to Littlewoods, one of Britain’s oldest retail brands.

Modak said: “nine people were killed in the blast and one died in hospital.”

The company said the plant was functioning well and the boiler, procured from Germany, had just been serviced.

The factory had been shut for 10 days for the Eid period at the end of the Muslim holy month of Ramadan and was being readied to resume operations from Tuesday.

“This was an accident. Everything was fine,” Mahiuddin Faruqui, company chairman and managing director, told Reuters.

“The boiler was running well. After servicing when workers were trying to restart it, it went off,” he said.

Bangladesh’s garment-making industry, the biggest in the world after China’s, employs four million people and generates 80 percent of its export earnings.

Multifabs started operating in 1992, and reached 70 million dollars in exports in 2016, supplying European brands such as fashion chain Lindex, which is part of Finnish retailer Stockmann and Aldi, Faruqui said.

Bangladesh’s garment sector came under scrutiny after the collapse of the Rana Plaza factory complex in 2013 that killed more than 1,100 people, and a fire at a garment factory in 2012 that killed 112 workers.

Activists had long criticized many retailers for failing to improve working conditions in their supply chains,

The Rana Plaza disaster sparked demands for greater safety and put the onus to act on foreign companies sourcing clothing from Bangladesh.

Two international coalitions have been formed to help fund improvements to building and fire safety at thousands of garment factories across Bangladesh.

One of those, the Alliance for Bangladesh Worker Safety, said fire incidents in Bangladeshi factories fell to 30 in 2015 from 250 in 2012.

The Multifabs unit hit by the blast turned out 100,000 pieces of garment a day, generating around $6 million of

He said the boiler had been working for about an hour when it exploded.

“We are surprised and saddened … every year around twice or thrice the boiler is serviced by our men and men from Germany,” he said.

Another group representing global brands and retailers, called the Accord on Fire and Building Safety in Bangladesh, said an independent inspection conducted on March 28, 2015, found that Multifabs’ boiler room was not separated by fire-rated construction.

It said in a report there were openings and “penetrations” from its dyeing shed and that an inspector had ordered that the problems be fixed within three months.

Mahiuddin Faruqui said the company had implemented those recommendations within that timeframe.

Chief government inspector Mohammad Mannan said his department had inspected the Multifabs boiler a year ago and that the next inspection was due this month.

Dogara questions deployment of military in ‘over 28 states’