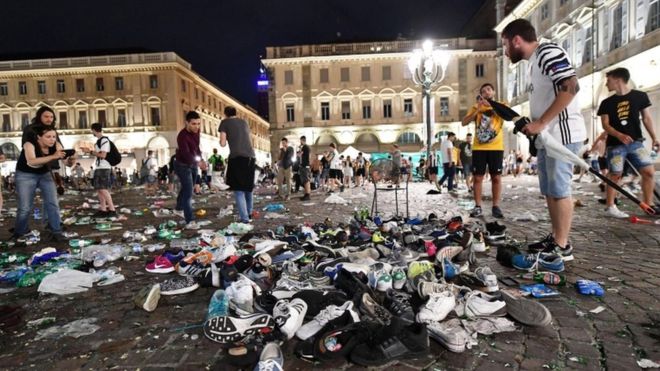 Bags and shoes were left scattered on the ground as people ran screaming out of the square. [Photo: The Nation]

About 1,000 people were injured after a firecracker provoked a stampede on Saturday night in the Italian city of Turin, police say.

Thousands of football fans were watching a live relay of Juventus’ UEFA Champions League final match against Real Madrid in Cardiff, Wales when a bang was heard.

Rumours of an explosion quickly spread to worsen the situation and provoke a stampede.

At least two people, including a seven-year-old child, were seriously hurt in the incident.

The News Agency of Nigeria reports that title-holders Real Madrid of Spain beat Juventus of Italy 4-1 to win the Champions League for the 12th time.

With 10 minutes of the second half remaining, crowds rushed away from the centre of Piazza San Carlo, crushing people against barriers.

Bags and shoes were left scattered on the ground as people ran screaming out of the square.

A seven-year-old boy is reported to be in critical condition in hospital with head and chest injuries.

Some of the injuries occurred when a barrier around the entrance to an underground car park gave way.

For some Juventus fans, the incident brought back traumatic memories of the 1985 Heysel stadium disaster in Brussels, where 39 people were killed, with most of them being Italian fans.

A wall had collapsed on them before the European Cup final match against Liverpool.