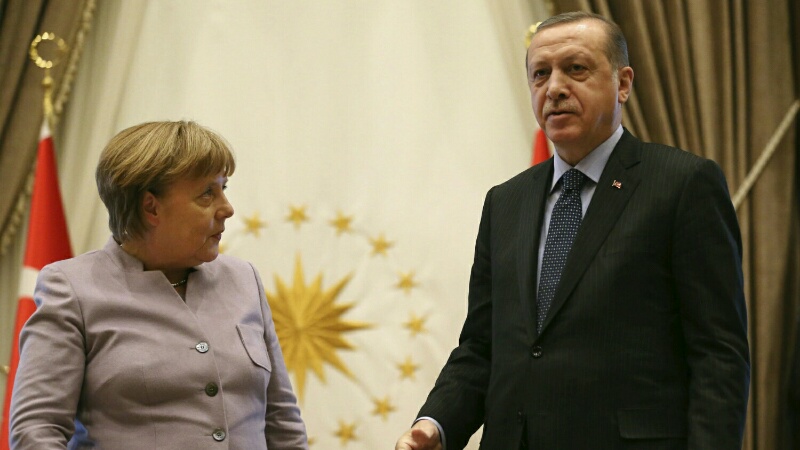 Erdogan upset with Merkel’s use of term “Islamist terror”

Turkish President Recep Tayyip Erdogan got upset Thursday when German Chancellor Angela Merkel used the term “Islamist terror” as part of a list of threats against which she is battling.

“The expression Islamist terrorism seriously hurts us Muslims,” he said in Ankara, as the two sat next to each other in front of journalists.

“Islam and terror have nothing to do with each other.

“The meaning of the word Islam is peace.”

“There is a difference between the terms Islam and Islamist,” said Merkel in response, insisting: “We do everything possible to let Muslims in Germany live their religion freely.”

She noted that together with Muslims, she raised her voice against terrorism.

The debate over the terminology is hardly new.

Former U.S. president Barack Obama went to great lengths to avoid using the phrase at all, with his aides insisting that the words were counter-productive and most Muslims would condemn acts of terrorism.

“I think that for us to be successful in fighting this scourge, it’s very important for us to align ourselves with the 99.9 per cent of Muslims who are looking for the same thing we’re looking for: order, peace, prosperity,” Mr. Obama told CNN in 2015.

Many Republican leaders in the United States, however, were angered with the Democratic president over his language, some even insisting he use terms like “radical Islam.”

President Donald Trump has stepped up this rhetoric.

For example, he said he aimed to keep out “radical Islamic terrorists” when he imposed a ban on visas to citizens of seven Muslim-majority nations.

Mr. Erdogan has not publicly waded into the debate over Mr. Trump’s ban, which has sparked outrage amongst many liberals and Muslim communities in the United States.

Mr. Trump has surrounded himself with key advisors who have made regular comments against Islam, with some insisting that they see the religion itself as an enemy.