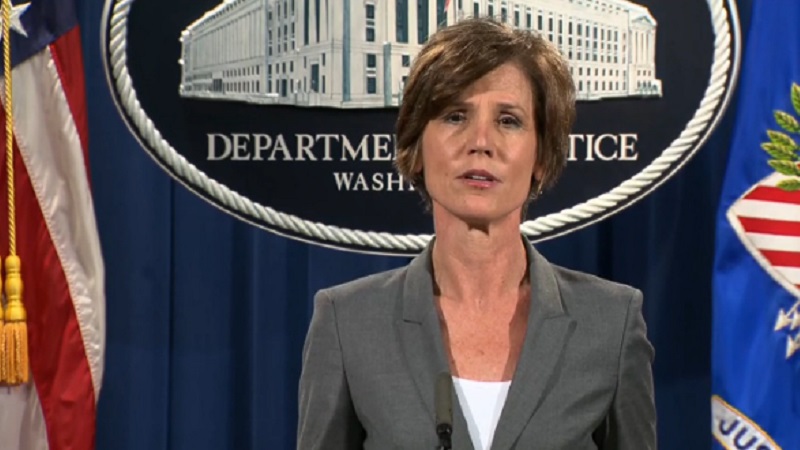 The White House, in statement obtained by the Correspondent of the News Agency of Nigeria (NAN) in New York, announced the appointment of Dana Boente as the new acting Attorney-General.

The White House said “the acting Attorney General, Sally Yates, has betrayed the Department of Justice by refusing to enforce a legal order designed to protect the citizens of the United States.

“This order was approved as to form and legality by the Department of Justice Office of Legal Counsel.

“Ms. Yates is an Obama Administration appointee who is weak on borders and very weak on illegal immigration. It is time to get serious about protecting our country.

“Calling for tougher vetting for individuals travelling from seven dangerous places is not extreme. It is reasonable and necessary to protect our country”.

Ms. Yates, in her directive refusing to enforce the presidential order wrote: “My responsibility is to ensure that the position of the Department of Justice is not only legally defensible, but is informed by our best view of what the law is after consideration of all the facts.

“In addition, I am responsible for ensuring that the positions we take in court remain consistent with this institution’s solemn obligation to always seek justice and stand for what is right.

The White House statement said “tonight, President Trump relieved Ms. Yates of her duties and subsequently named Dana Boente, U.S. Attorney for the Eastern District of Virginia, to serve as Acting Attorney General until Senator Jeff Sessions is finally confirmed by the Senate, where he is being wrongly held up by Democrat senators for strictly political reasons”.

The White House quoted Boente as accepting the honour to serve in the new capacity.

“I am honoured to serve President Trump in this role until Senator Sessions is confirmed.

“I will defend and enforce the laws of our country to ensure that our people and our nation are protected,” Boente was quoted as saying.