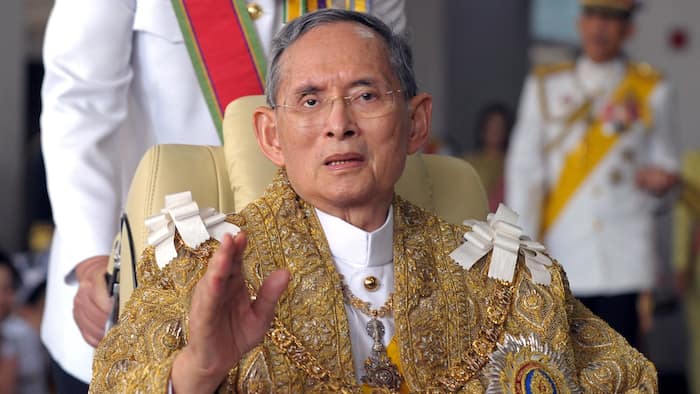 Thai King Bhumibol Adulyadej waves to we...Thai King Bhumibol Adulyadej waves to well-wishers after the royal ceremony for his 83rd birthday in Bangkok on December 5, 2010. the Thai king is the world's longest reigning monarch who is regarded as a demi-god by many Thais and considered a unifying force in a politically turbulent nation. AFP PHOTO/Pornchai KITTIWONGSAKUL (Photo credit should read PORNCHAI KITTIWONGSAKUL/AFP/Getty Images)

The king died at 88 after reigning for more than 70 years.

The palace said Mr. Adulyadej passed on at Siriraj Hospital in Bangkok, but did not disclose the ailment that led to his death.

The monarch was hospitalised after he took ill. On Thursday, about

300 people gathered in hospital as his health worsened.

The palace had said in a statement late Wednesday that the king’s health had not yet stabilised and that he was on a ventilator, battling a new infection.

It followed a statement on Sunday saying the king was in an unstable condition after receiving haemodialysis treatment.

Well-wishers gathered on Thursday outside Siriraj Hospital, which is near Bangkok’s Chao Phraya River.

Some wore yellow, the king’s colour, and others donned pink, a colour they believed would bring the king an improvement in his health while they prayed.

“I was worried so, I came here to see for myself this evening; I will take part in chanting for the king,” housewife Thornpan Tornueng, 67, said.

District police commander Rithee Visetkamin said more people were expected to gather at the hospital through the day.

The late king was seen as a unifying figure in Thailand, which has grappled with political uncertainty in recent years.

His health, usually watched closely, was a sensitive subject.

Strict lese-majeste laws meant public discussions of his health and any succession plans were punishable by lengthy jail terms.

Investors in the Stock Exchange of Thailand have sold shares since Sunday’s statement from the Royal Household Bureau on the king’s health.

The main index fell as much as 6.9 percent on Wednesday to its lowest since March 1, but recovered to close down 2.5 percent, it’s lowest since the end of May.

It was down 2.1 percent by the mid-day break on Thursday.

Deputy Prime Minister Somkid Jatusripitak, said he had asked the Securities and Exchange Commission (SEC) to investigate rumours that had been affecting the market.

“I will tell the SEC to investigate who spread the news and who caused stocks to fall. Foreigners are waiting to pick up stocks and Thais are selling them.

“I don’t think it’s beneficial to do that because this is an important time for the country and we should not undermine ourselves.

“Don’t listen to rumours please; only listen to the government,” ,” Mr. Somkid said.

The government on Wednesday urged people to ignore rumours on social media and wait for official announcements.