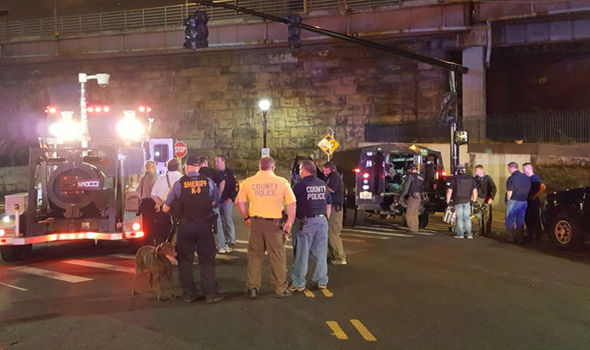 Bomb experts who were working to defuse explosive devices, accidentally detonated one of them on Monday at a train station in the north-eastern U.S. state of New Jersey, the FBI said

The package was discovered late Sunday at the Elizabeth Train Station, the FBI’s Newark branch tweeted, adding that no one was injured in the unintentional detonation.

Security forces in the east-coast states of New York and New Jersey have been on edge in the wake of two explosions that occurred at the weekend.

The first along the planned route of a U.S. Marines-sponsored charity run in New Jersey on Saturday, and the second in the popular Manhattan neighbourhood of Chelsea later that evening.

No one was injured in the New Jersey blast, while the Chelsea bombing injured 29 people and prompted the discovery of a second device blocks away in Manhattan.

The Federal Bureau of Investigation and a bomb squad were reported to be looking into a possible pipe bomb found in garbage at a train station.

The blast on Saturday night in New York City’s hip Chelsea neighbourhood destroyed a garbage bin. The site is 3 kilometres from United Nations headquarters on the East River.

New York Mayor Bill de Blasio on Sunday vowed a “bigger than ever” police presence to protect the UN.

He noted that the UN General Assembly debate, which begins on September 13, was already designated a national special security event, for which thousands of federal personnel led by the Secret Service were deploying to the city.

“Any area in New York City associated with UNGA will therefore be subject to an extraordinarily high level of surveillance and security,” Mr. Johnson said.

Obama was to visit the U.S. mission outside the UN and spend the night in the city, before co-hosting a Tuesday summit on the global refugee crisis.

The bomb appeared to have been built from a pressure cooker, much like a second, unexploded device found minutes later, a few blocks from the blast site.

“We will find whoever did this or whatever group did this, and they will be brought to justice, period,” Cuomo said.

Broadcaster CNN reported that a investigators have spotted a man pulling a piece of wheeled luggage on surveillance videos from the explosion site.

A few minutes later, the same man was captured by another security camera leaving the bag at the site where the unexploded device was found.

Why only judges, not lawyers, should be appointed Chief Justice of Nigeria – outgoing CJN