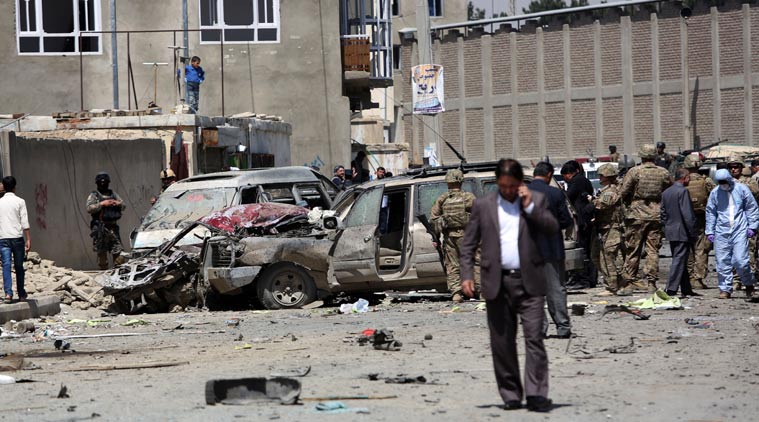 At least 80 people were killed in a bombing in the Afghan capital during a demonstration, the Interior Ministry said on Saturday of the attack claimed by the Islamic State extremist group.

At least 10,000 people were taking part in the protest, according to event organizer Mohammad Arif Rahmani.

Most of the protesters were Hazaras, a Shiite minority from central Afghanistan, who have long suffered discrimination, especially under Taliban rule when thousands from the tribe were killed.

The Hazara minority ethnic group makes up 22 per cent of Afghanistan’s Sunni-dominated population.

The Interior Ministry’s statement said that two attackers detonated their suicide vests, while “one was killed by Afghan security forces.”

Islamic State claimed responsibility for the attack, writing on its affiliated Aamaq News Agency that two of its fighters carried out the attack.

“Abu Ali, an Islamic State commander in Achin district of Nangarhar [an eastern Afghan province], reported to his commanders that three suicide bombers penetrated the demonstration in Dehmazang,” an Afghan intelligence official, who spoke on condition of anonymity, said.

The Hazaras are one of the poorest and least-assisted groups in a country where billions of dollars in aid have poured in since 2001.

Hazaras have been targeted in both Pakistan and Afghanistan in recent years.

The protesters were demanding that the construction of an electrical transmission line from Turkmenistan to Pakistan via Kabul be rerouted through their province of Bamyan, which is not currently connected to Afghanistan’s central electricity grid.

Islamic State has been known to carry out brutal attacks against Shiites in Iraq and Syria, but this is the first attack they have claimed in Kabul against an ethnic minority.

Afghan President Ashraf Ghani said he was “deeply saddened” by the attack, adding that security forces were among the casualties, while Afghan Chief Executive Abdullah Abdullah condemned the attack.

The U.S. condemned “in the strongest terms the vicious attack,” and offered assistance to Ghani in the investigation.

“The innocent victims today were, as President Ghani said, exercising nothing more than their constitutional right of peaceful demonstration,” according to a US State Department statement.

“They were gathered together as free citizens, protected by brave security forces who also fell victim in the line of duty,” said State Department spokesman John Kirby.

“We extend our condolences to the families and friends of the victims and express our solidarity with the Afghan people,” according to a spokesperson for EU foreign policy chief Federica Mogherini.

“We stand by the Afghan authorities in the fight against terrorism and call on all Afghans to stay united in support of the efforts to fight this global threat,” the EU statement said.

Images on social media showed horrific scenes with scores of people wounded in the square where the protesters had gathered.

Taliban militants denied any involvement. “We want to make it clear Our Mujahideen had no hand in the attack,” Taliban spokesman Zabihullah Mujahid wrote in an email.