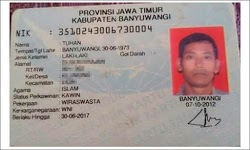 Indonesian Council of Muslim Scholars has told a man whose name means God to change his name on Tuesday or risk being denied social services.

A photo of an identity card belonging to the 42-year-old carpenter called simply Tuhan, the Indonesian word for God, was widely shared on the internet last week, with a caption: “God does exist”.

The Chief of the council, Bukhori Abdussomad, urged Tuhan to change his name or add the prefix Abdu so that his name would translate to Servant of God.

“We suggest the name change to avoid an interpretation that could lead to idolatry.

“Besides, the name Tuhan is unseemly from a religious point of view,” Abdussomad said.

He urged authorities to suspend Tuhan’s identity card and halt social services for him until he changed his name.

The man, from Banyuwangi district, said he did not know why his parents named him Tuhan and wondered why it had only become controversial now. (dpa/NAN)