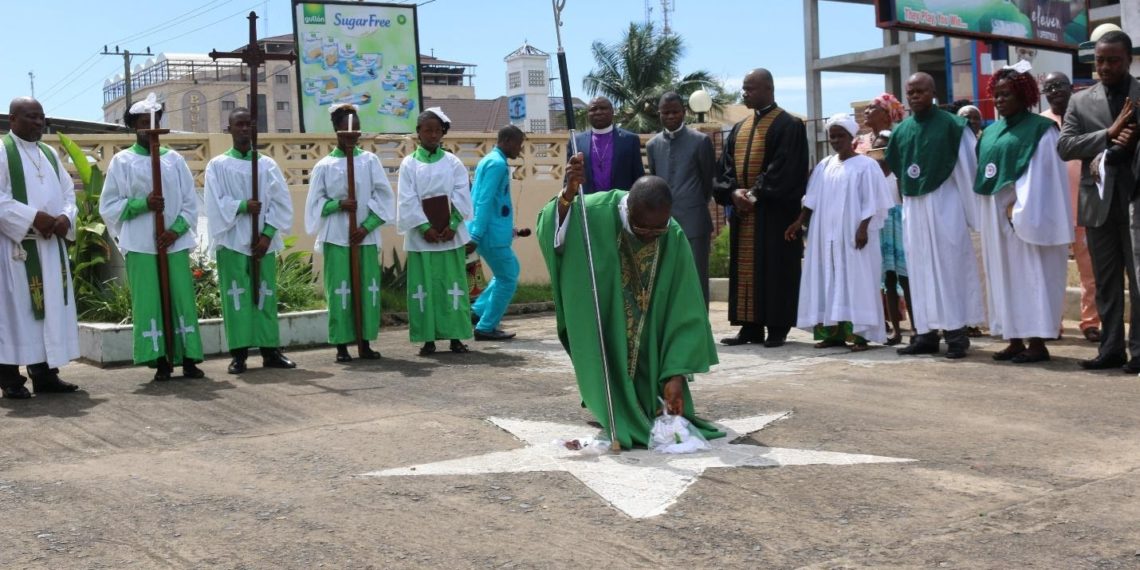 Victims and campaigners for a war crimes court for Liberia welcomed the motion against Mr Thomas.

The Centre For Justice and Accountability (CJA) has filed on behalf of four victims asking court to find Moses Thomas, a colonel in the AFL and commander of its Special Anti-Terrorist Unit “liable for extrajudicial killings, attempted extrajudicial killings, torture and cruel, inhuman or degrading treatment, war crimes and crimes against humanity.”

The motion, filed in the U.S. District Court for the Eastern District of Pennsylvania says “because there is no issue of material fact in dispute,” plaintiffs ask for the court to grant their motion. Victims ask for $US4m in “compensatory and punitive damages.”

A U.S. federal court in Philadelphia could pass judgement in the absence of Thomas, who fled to Liberia in 2020.

The St. Peter’s Lutheran Church Massacre is the single worst atrocity in the Liberian Civil War (1989-2003), with 600 people—predominantly Gios and Manos—killed on July 29th, 1990.

If he is found responsible Thomas will be the first person held liable for the massacre more than 30 years since it happened.

Four Liberian survivors and children of victims of the St. Peter’s Lutheran Church Massacre, who filed a lawsuit against former Armed Forces of Liberia (AFL) colonel, Moses Thomas, in 2018, have asked a federal judge in the United States to find Mr Thomas responsible for the massacre and numerous crimes against humanity.

Lawyers for the victims filed 2000 pages of evidence with the court Tuesday saying, “because there is no issue of material fact in dispute” the court should grant their motion to find Thomas liable for the crimes and award them $US4m in “compensatory and punitive damages.”

“We believe that today’s court filing presents conclusive evidence that Thomas was responsible for the Lutheran Church Massacre and we are asking the court to hold Thomas liable for extrajudicial killing, torture, war crimes, and crimes against humanity,” said Elizabeth Nielson of Debevoise & Plimpton, which alongside the Center for Justice and Accountability (CJA) represents the plaintiffs in the case in the statement on Tuesday.

The lawyers brought the suit on behalf of the Liberia-based victims in part because they were unable to obtain justice in Liberia. Today the lawyers urged the government of Liberia to act.

“Liberia has yet to see meaningful accountability for the atrocities committed during its civil wars, despite demands from Liberian civil society and recommendations by the United Nations,” said Ela Matthews, a lawyer at CJA. “The catalog of evidence filed today not only proves our clients’ claims against Thomas, but shows why Liberia must finally take action to end impunity.”

CJA’s filing for a summary judgement comes a year after Mr Thomas fled the United States and returned to Liberia.

He had not responded to his February 12, 2018 indictment as well as two requests from the court for him to do so. The court had also denied his motion to dismiss the case on grounds that the alleged offences had taken place a long time ago.

The case was brought under the U.S. Torture Protection Act and the Alien Tort Statute which allow victims to bring civil actions against alleged perpetrators for acts committed outside the United States.

The plaintiffs accused Thomas, a former commander of the Krahn-dominated Special Anti-Terrorist Unit (SATU) of the Armed Forces of Liberia (AFL) of masterminding the killing of some 600 civilians, predominantly of the Gio and Mano ethnic groups, over a brutal 8-hour period.

Victims’ statements contain harrowing stories. One victim was clear that the attack was directed at ethnic groups believed to support the growing rebellion of Charles Taylor in the northern county of Nimba.

“The soldiers said not one Nimba man will leave. Before the arrival of Taylor, there will be no Gio men. I heard people begging for their lives and saw soldiers searching everywhere for survivors and killing people, including a man wearing a Red Cross vest, with cutlass, axes and guns”.

Another victim, named John Y, a child at the time, described hiding in the church’s pulpit with a little boy. He explained, “I whispered my little brother’s name at this boy, even though I knew that my little brother was in the school building with my mother. I just wanted to have my family alive with me, and the thought that my brother was next to me kept me believing that I could survive.”

Injured civilians who fled the church were killed at the John F. Kennedy Medical Center, St. Joseph Catholic hospital and on the runway of the James Spriggs Payne Airfield, eyewitnesses told New Narratives. The plaintiffs are only identified in court as Jane W, John X, John Y and John Z for their safety.

CJA and the Liberia-based Global Justice Research Project investigated Thomas for eight years. Apart from the testimonies of the plaintiffs, evidence against him includes sworn statements from BBC journalist Elizabeth Blunt, expert reports from a former American envoy, an ex-soldier of the Armed Forces of Liberia and experts from declassified diplomatic cables, Liberia’s Truth and Reconciliation Commission and UN reports.

Mr Thomas, 67, reached by phone by New Narratives last week, angrily denied the charges and refused repeated requests to talk on the record.

He has previously denied the accusations. “It’s all lies,” he told the Philadelphia Enquirer after he was sued in 2018. “The stuff they’re talking about is nonsense. You can call anyone in the Republic of Liberia and give them my name, and they will tell you that this is nonsense.”

CJA lawyers were unable to confirm Mr Thomas’s legal status in the US but they believe he was there legally and voluntarily surrendered his legal status to return to Liberia, likely to escape the court action.

CJA is confident they can win the case without a trial, which would not be possible now that Thomas has left the U.S. Under U.S. Federal Rule of Criminal Procedure, complainants can file a summary motion for a judge to decide a case based on the evidence they provide as long as the defendant in the case does not dispute the evidence.

CJA has won cases via summary judgement, including in 2012 against Somali Colonel Abdi Aden Magan, for the torture and arbitrary detention of law professor and human rights advocate Abukar Hassan Ahmad.

It is not a criminal case. Mr Thomas will not face jail time. The US District Attorney office in Philadelphia which prosecuted criminal immigration fraud cases against Mohammed Jabbateh and Tom Woewiyu could not find a US crime to charge Mr Thomas with.

Unlike Jabbateh and Woewiyu, he had not applied for US permanent residency and so had not lied about his wartime activity in immigration proceedings as they had.

Mr Thomas is now the only person who has been held to account for the St. Peter’s Lutheran Church Massacre, the single worst atrocity in the Liberian Civil War (1989-2003).

It was widely blamed as the catalyst for the escalating tit-for-tat killings between ethnic groups which spiralled into the 14-year conflict which killed an estimated 250,000 people. It was not just the church killings that SATU is associated with.

The group is also responsible for 53 crimes in total during the first half of the civil war documented by the TRC. Other members of the elite Executive Mansion battalion named in the commission’s reports are Youbu Tailey, George Dweh and Jerry Gban, all deceased.

Plaintiffs filed this case in the United States because they have been unable to obtain accountability in Liberia. Jane W. lamented this failure of justice in a press release from CJA.

Victim John Z said, “It is very difficult for me to remember and speak about these events, because it makes me feel terrible. But I joined this case and am speaking out now because I know that what Moses Thomas did was wrong, and I want to bring him to justice. I want him to be held accountable for what he did to me and so many others at the Lutheran Church.”

Victims and campaigners for a war crimes court for Liberia welcomed the motion against Mr Thomas.

“We feel justice is closer,” said Marcus Quoigoah, president of the Lutheran Church Massacre Survivors Association. It’s victory number one because over the past years, since 1990 up to current, for us as survivors of this [massacre], this is the first victory we see coming so closer to us right now.”

“Too often alleged perpetrators of gross human rights violations during the Liberian civil wars evade justice thanks to the prevailing impunity in Liberia,” said Alain Werner of Civitas Maxima, which collaborates with the GJRP. “We applaud the Center for Justice and Accountability (CJA) for filing this case on behalf of survivors and family members of those killed during the devastating July 1990 St. Peter’s Lutheran Church massacre.”

This story was a collaboration with New Narratives as part of the West Africa Justice Reporting Project. Additional reporting by Anthony Stephens.