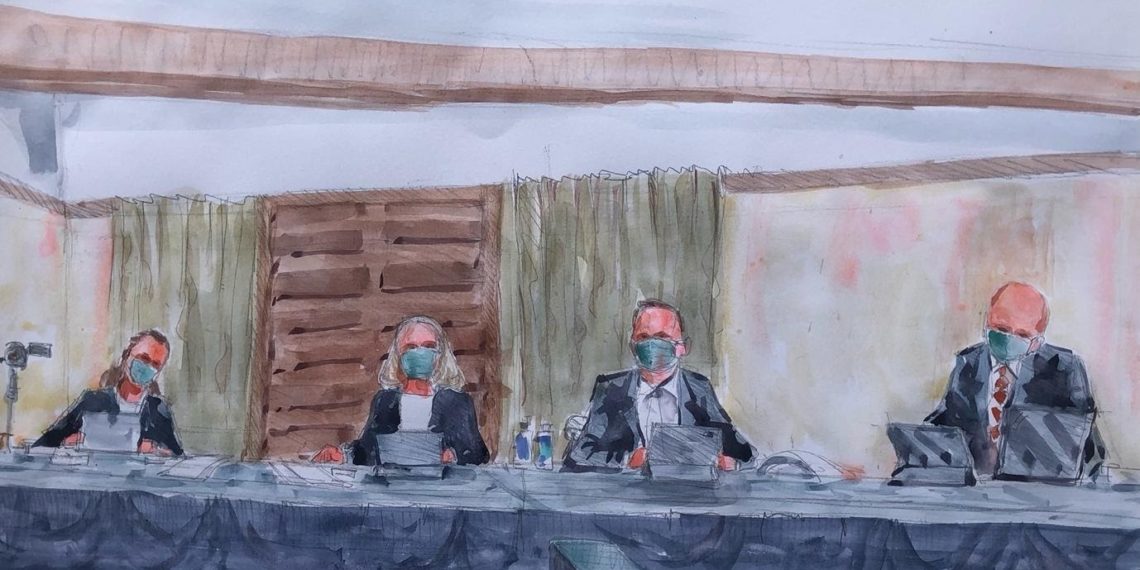 The witness says several people were killed by RUF rebels under the command of “Angel Gabriel” who he said is the same Gibril Massaquoi.

It was an emotional day in the war crimes trial of Gibril Massaquoi (Angel Gabriel) as one of the witnesses broke down in tears as he described the day he said fighters under Massaquoi’s command locked 75 people in a kitchen and set them ablaze in 2001 in Kiatanhun in Lofa County.

Over the past three weeks the Finnish court, holding hearings in Liberia, heard from witnesses who accused Mr Massaquoi of atrocities at the Waterside Bridge in Monrovia.

On Tuesday the focus of his alleged crimes moved to Lofa County, in Liberia’s north-western region which had been a base for RUF fighters when they first entered Sierra Leone to start the rebellion that would plunge that country into 11 years civil war in 1991.

“When the soldiers, some of them speaking Mende, Creole, and the Liberian English, came and captured us, they put 75 of our people in a kitchen and set them ablaze because these soldiers believed that the people were bulletproof and could not be killed using guns,” the witness told the court.

“I can say I was the only survivor because one of those soldiers, ‘God First’, had love for me and asked his soldiers not to kill me,” the man, codenamed Civilian 50 told the four-judge panel through tears. The court was suspended for a time as the man regained his composure.

The witness said before the rebels killed the group in the kitchen, they had killed an old man named Siafa Tulay. He told the court that he was kept alive because he was literate and the fighters decided he was useful to them.

“They put on my head a tin of red oil to take to Sierra Leone through Vahun to sell and we used bush roads through Kpokolahun,” he told the court.

“I was among them in Sierra Leone when they were saying ‘who wants short or long sleeve?’ When you say you want a long sleeve, they cut your hand right here,” said the witness pointing to a place on his arm that indicated arms would be cut above the elbow. The RUF terrorized Sierra Leone cutting the hands and arms from civilians including children.

The witness made clear that the man on trial directed the events that he witnessed in Lofa.

“I saw Gibril Massaquoi and Zigzag Maza in Kpokolahun, and I saw him (Massaquoi) among the soldiers and they were paying courtesy to him. He called his name ‘Angel Gabriel,’ but not Mr Massaquoi, and this is how I knew him.”

Unlike past witnesses who described Mr Massaquoi’s height and skin colour, Civilian 50 said he could not recognize him by anybody feature because the fighters had masks on their faces and were dressed in an unusual way.

There was some inconsistency in the testimonies on Tuesday. Most could not remember the actual dates of their encounters with Mr Massaquoi. But Civilian 50 was clear on his dates. He said it was April 7 in 2001 when the soldiers first entered his town. He said he was captured with others on August 13, 2001.

Another witness took the court back to Waterside Bridge in Monrovia where previous witnesses had testified to Mr Massaquoi’s alleged atrocities.

One of the witnesses, a nurse codenamed Civilian 08, testified that he heard from witnesses who had seen dead bodies floating in the water. He said was caring for people who were injured between 2001 and 2003 at the nearby Kriston Family Medicine Store.

“It is a common practice in Liberia that whenever someone tells you something, you narrate the story as if you were present. This is why I said I saw bodies, but I was quoting the patients who came to me for medication. I can’t lie under oath.”

Another witness codenamed Civilian 36 struggled to remember the year of his alleged encounter with Mr Massaquoi but said it happened between 2001 and 2003. He claimed to have known Mr Massaquoi as “Angel Gabriel” or “Next to God” in Kiatanhun.

He also claimed that his wife, brother-in-law, an Imam, and several others were killed by RUF rebels under the command of “Angel Gabriel” who he said is the same Gibril Massaquoi.

“He and his bodyguards were speaking Mende, and I don’t understand. The Mende tribe is in Sierra Leone, about three hours walk away from our town,” he said.

Civilian 43, the fourth witness of the day, told the court that she and her brother were young children when fighters under Massaquoi’s command killed her mother and father leaving them orphans.

“For that, I didn’t go to school because no one to help me. My brother and I left for Kolahun after killing our parents,” she said.

Civilian 43 also did not remember the day or year of her ordeal but could recall the name “Angel Gabriel” whom she later referred to as “Angel Michael”.

She told the court she could not recall the exact name that she gave to the Finnish police who interviewed her before the trial. She said both “Angel Gabriel” and Michael refer to Gibril Massaquoi who she said was a name well known among the soldiers who entered Kiatanhun.