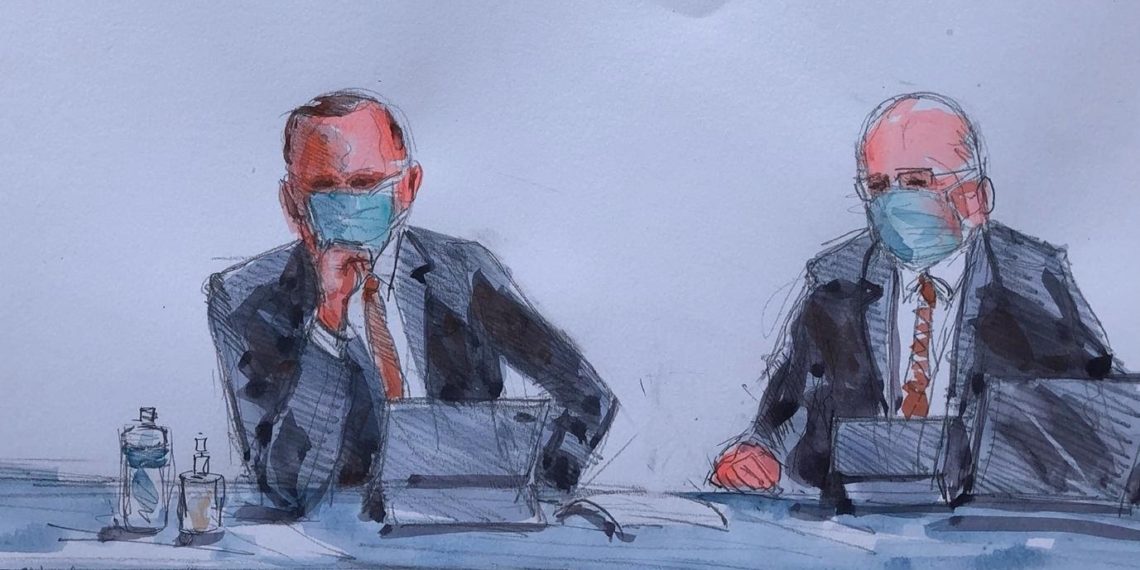 Mr Massaquoi is on trial in the European country of Finland where he had relocated under a deal between the Finland government and the Special Court for Sierra Leone for which he was a key informant.

A prosecution witness in Friday’s session of the war crimes trial of Gibril Massaquoi showed the Finnish court a scar on his arm that he said was the result of a bullet fired at him by rebels under Mr Massaquoi’s command as he tried to rescue a friend who had been gunned down in the Waterside Market.

The witness, code-named “Civillian 77” by the court to protect him from retaliation and intimidation, said that incident happened in 2001. He and his friend “George” had gone to the Waterside market in search of goods to buy and sell. Fighting between the forces of LURD and the government of President Charles Taylor had shut down the city and almost every basic commodity had become scarce.

Civilian 77 told the four-judge panel that when he and his friend went to the Waterside market, they saw a store open with people coming out with cartons of biscuits. He said it was the only store open in Waterside that day. He and his friend decided to buy some of the biscuits to sell. (Earlier witnesses have testified that Mr Massaquoi’s fighters had demanded money in return for shooting the store open and allowing people to loot it.)

“All of a sudden, we started hearing heavy firing. People started running. Some people were falling and others decided to run,” he said. “We saw soldiers with guns. When we were running, I could not see George. Later I heard him shouting out my name. George’s condition was bad. Before I could bend down to him, I was shot on my arm. I saw blood coming down my hand.”

Mr Massaquoi, a former top commander of the Sierra Leonean ex-rebel group, the Revolutionary United Front (RUF), is on trial in the European country of Finland where he had relocated under a deal between the Finland government and the Special Court for Sierra Leone for which he was a key informant.

He was charged in March 2020 under the principle of “international jurisdiction” for war crimes and crimes against humanity that he allegedly committed in Liberia. In an unusual step, the presiding judge decided the court of 12 people would travel to Liberia and Sierra Leone to hear from more than 80 witnesses rather than making the witnesses travel to Finland.

Mr Massaquoi, who had played a leading role in the rebellion in Sierra Leone, joined the Liberian civil war because of the RUF’s connection to former Liberian President Charles Taylor whose close ally was Foday Sankoh, the founder and leader of the RUF.

The testimony over the last two weeks has focused on alleged crimes that took place in 2001 when LURD forces were fighting the forces of President Taylor in Monrovia. Mr Massaquoi’s forces were allegedly supporting Mr Taylor.

Mr Massaquoi denies all the charges claiming he was not in Liberia at the time.

On Friday, Civilian 77 told the court that the soldiers began grabbing people. “I was grabbed, too. At that time, George couldn’t talk anymore,” he said. They were taken to a checkpoint on the Waterside Bridge.

“They said they will kill all of us because we were looting.”

Civillian 77 said he was looking closely to see if he could recognize any of the soldiers since he was very familiar with most of Charles Taylor’s troops. But he said these fighters were all strange and spoke “Sierra Leonean English”.

“A man came and they were all calling him chief. He was speaking Sierra Leonean English. He said he will send everyone to heaven and when we get there we should say ‘Angel Gabriel sent us’,” he said. Earlier witnesses have described the same warnings and the alias they say Mr Massaquoi used, “Angel Gabriel”.

“Angel Gabriel”, Civillian 77 said, took four men from among those captured, a distance away from the rest towards West Point and killed them. “He said he was coming to show us what he can do.”

Civilian 77 told the judges that he still feels pain in his arm as a result of the bullet wound. While they were still tied up and being tortured by the soldiers another pickup truck of uniformed soldiers arrived at the checkpoint, he said. Amongst them, he recognized two soldiers he named as “Mike 1” and Cooper Teah, aka “U.S. Cooper”.

The witness said soldiers informed “Angel Gabriel” and his men that they were sent by Benjamin Yeaten to put the situation at Waterside under control.

Mr Yeaten, widely known by his old radio call sign “50”, was a Liberian militia leader and mercenary, who served as the Armed Forces of Liberia’s deputy commander and director of the Special Security Service during the presidency of Charles Taylor. Mr Yeaten’s current whereabouts are unknown although justice activists are trying to find him in order to bring charges against him.

Civillian 77 said “U.S. Cooper” recognized him and took him and the rest of the wounded civilians to the John F. Kennedy Memorial Medical Center for treatment.

Friday’s second witness, a woman given the code name “Civilian 66”, told the court she watched her aunty die when she was shot by the soldiers while also escaping the shooting at the biscuit store. Civilian 66 was captured by the soldiers while crying over her aunt’s corpse. She said she was taken down the Waterside Bridge. “They tied our arms tight at our backs and sat us down.”

“The soldiers called their big man and when he came, he grabbed one girl from beside me. He made the statement that ‘I Angel Gabriel, I am going to kill you and when you die, tell God I, Angel Gabriel, killed you’. He killed the girl and started to beat us. He sounded like a Sierra Leonean man,” Civilian 66 said.

She also recalled that a group of women were taken from their midst and taken to a two-storey building near the checkpoint. She said she was informed by some of them who returned that they were raped. She also saw child soldiers.

“Small children were there with arms in their hands. The soldiers were mixed up.”

Civilian 66 said they were rescued by another soldier who arrived on the scene and established that they were not combatants before letting them go.

The trial continues on Monday.

Buhari urges Nigerians to get COVID-19 vaccination after receiving jab