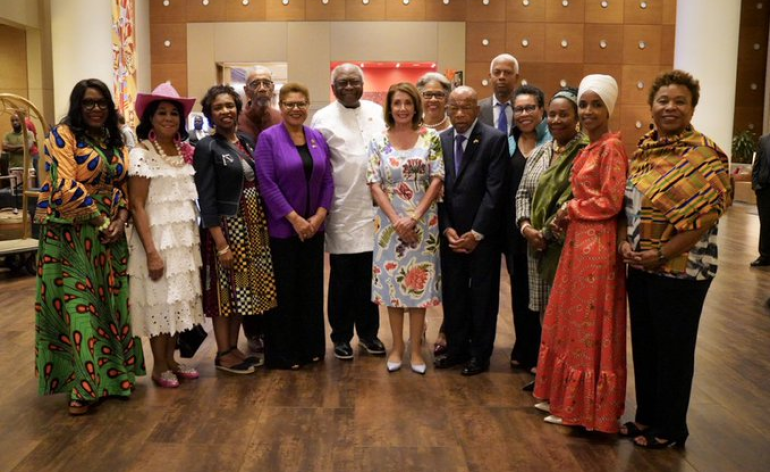 By Renee Moodie and AllAfrica

A Congressional delegation led by the Speaker of the United States House of Representatives, Nancy Pelosi, has arrived in Ghana.

The delegation includes Majority Whip James Clyburn, Chairwoman of the Congressional Black Caucus Karen Bass, Co-Chair of the Democratic Steering and Policy Committee Congresswoman Barbara Lee and the legendary civil rights leader John Lewis. Also in the delegation is Somali-born Congresswoman Ilhan Omar, recently the subject of attacks by U.S. President Donald Trump, who told Omar and three other women members of Congress to “go back” to the countries they came from.

Ghanaweb reports that Pelosi and her delegation – all members of the U.S. Democratic Party – touched down at the Kotoka International Airport on Sunday afternoon and were met by the U.S. Ambassador to Ghana, Stephanie S. Sullivan and the Speaker of the Ghanaian Parliament, Mike Aaron Ocquaye.

The delegation is to hold high-level discussions with President Nana Akufo-Addo and Pelosi will deliver an address to the Ghanaian Parliament on Wednesday July 31.

A statement by Pelosi says that the delegation will pay its respects at Cape Coast and Elmina Castles and the “Door of No Return” to observe the 400th Anniversary of the First Enslaved Africans Landing in America.

“In Ghana, our delegation looks forward to high-level discussions on key issues such as regional security, sustainable and inclusive development and the challenges of tomorrow including the climate crisis,” Pelosi said. “It is a special honor to be the first U.S. Speaker of the House to address the illustrious Parliament of Ghana, as we build on the partnership between our nations.”

Congresswoman Bass said in the statement: “400 years ago this year, our ancestors were first brought to this continent in chains… Twelve Members of the Congressional Black Caucus will return to the African continent as Members of the United States Congress. We have come so far but we still have so far to go. Among the history being made this trip, I am very much also looking forward to witnessing the first woman Speaker of the United States House of Representatives address the Ghanaian parliament. I thank Speaker Pelosi for leading this important trip and for joining us in sending a signal of mutual respect and partnership to Ghana and the continent of Africa as a whole.”

Ghana was the first African country that Barack Obama visited in his tenure as U.S. President. He delivered an address to the Ghanaian parliament during the visit. In 2009, he told allAfrica in an interview that Africa was a place of “extraordinary promise”.

The Members of the Congressional delegation are: