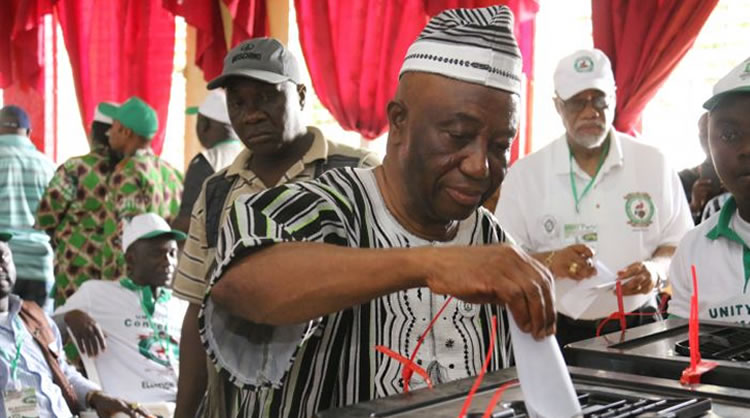 Liberia’s Vice President Joseph Boakai has again promised to accept the result of the ongoing presidential run-off election if the exercise passes all tests of credibility.

Mr. Boakai made the same promise during the first round of elections on October 10.

Addressing journalists shortly after casting his vote at St. Kathlene McGure Memorial Catholic School in Rehab community outside Monrovia, he said the run-off was an acid test for Liberia’s democracy.

Mr. Boakai joined opposition figure and third-place finisher in the first round, Charles Brumskine, in challenging the results, calling for a rerun on allegation of massive fraud and irregularities.

The Supreme Court had halted the run-off earlier slated for November 7 pending the determination of the complainants’ petition by the National Elections Commission, NEC.

NEC dismissed the complaints on the ground that they could not provide sufficient evidence to warrant a rerun of the elections as demanded by them.

The case proceeded to the apex court, which also thrashed the complainants’ appeal in its ruling on December 7 for want of evidence to substantiate their claims.

Both men had also called for the resignation of NEC’s Chairman, Jerome Korkoya, whom they accused of bias and incompetence.

Responding to a question on whether he now had faith in the Korkoya-led NEC, Mr. Boakai said he was left with no other choice than to “live with it”.

“It is great day for Liberia – a test day for democracy. We will accept the results provided they meet all the standards.

“My focus now is to win, from there, I am going to get on the drawing board with my team and then we will put a plan together to move our country forward,” he said.

Former President Goodluck Jonathan had, on Monday, met separately with Boakai and Weah during which he appealed to them to accept the outcome of the election results.

In a statement, his media adviser, Ikechukwu Eze, reported the former president as urging both men to appeal to their supporters to keep the peace.

Why we need $1 billion ECA fund for security – Lai Mohammed