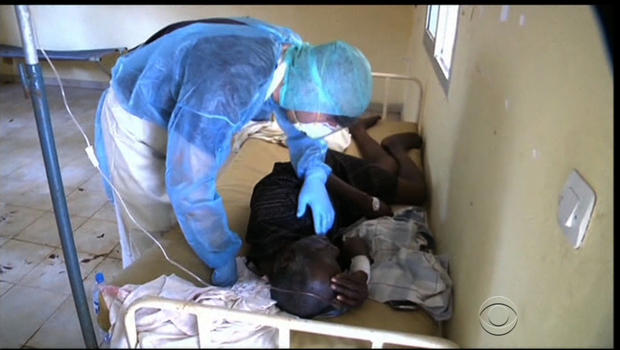 Ebola patient being attended to during the last outbreak

Sierra Leone on Monday released its last confirmed Ebola patient from hospital and began a 42-day countdown to being declared free of the virus, a medical source said.

“Today is without doubt a day for celebration and reflection on the thousands of lives lost during this devastating crisis,” said Sean Casey, Regional Director for the International Medical Corps, West Africa Ebola Response.

The world’s worst known Ebola epidemic had raged in West Africa for more than 18 months, infecting more than 28,000 people and killing more than a third of them.

Sierra Leone confirmed its first case in May, 2014 and has since recorded the highest number of cases in the region, although neighbouring Liberia has suffered more fatalities.

Adama Sankoh, 35, responded well to treatment and received her second negative test result on Sunday before her release the following day, which was marked by a ceremony attended by President Ernest Koroma.

Medical staff celebrated and Ebola survivors held up signs of praise to Koroma at the International Medical Corps treatment centre in the city of Makeni.

During the epidemic, it ebbed only to flare back as scientists said sexual transmission was the most likely explanation for the resurgence.

Why I’m different from other Kannywood actresses – Khadijat Mustapha