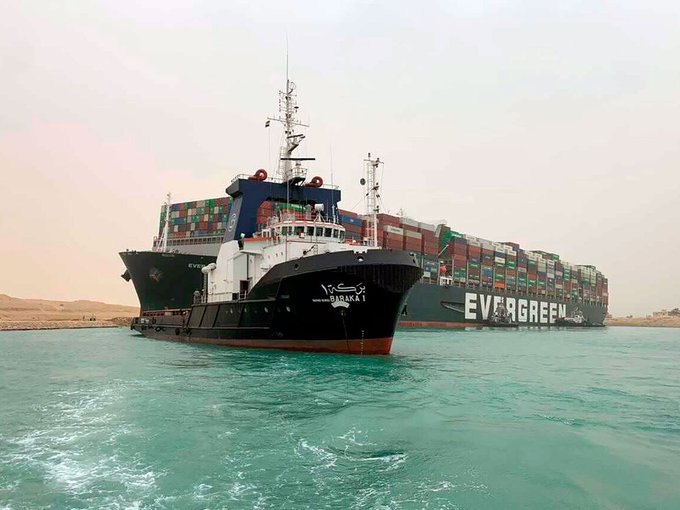 The Ship at the canal [PHOTO CREDIT: @business]

Some 12 per cent of the world trade volume passes through the man-made canal, which is a major source of hard currency in Egypt.

Egypt’s Suez Canal Authority (SCA) said on Wednesday that it had diverted ships to its old channel after a giant cargo container blocked the course of the new crossing.

“Eight tug boats were continuing the rescue works of a 400-meters-long, 59-meters-wide container ship which is among the largest in the world, that has turned sideways in the Suez Canal,” said the SCA in a statement.

The 224,000-tonne Ever Given, a Panama-flagged container ship, coming from China to Rotterdam, was grounded on Tuesday in the new passage after losing the ability to steer amid high winds and a dust storm, the SCA added.

“Navigation in the old channel is working regularly now,” it said, adding that the authority was sparing no effort to ensure regular navigation through the canal and to serve the world trade movement.

The Suez Canal is a major lifeline for global seaborne trade since it allows ships to travel between Europe and South Asia without navigating around Africa, thereby reducing the sea voyage distance between Europe and India by about 7,000 kilometers.

Some 12 per cent of the world trade volume passes through the man-made canal, which is a major source of hard currency in Egypt.

The Canal was expanded with a parallel course in 2015, where the ship was grounded. (Xinhua/NAN)

I thank God I went to prison – Kalu