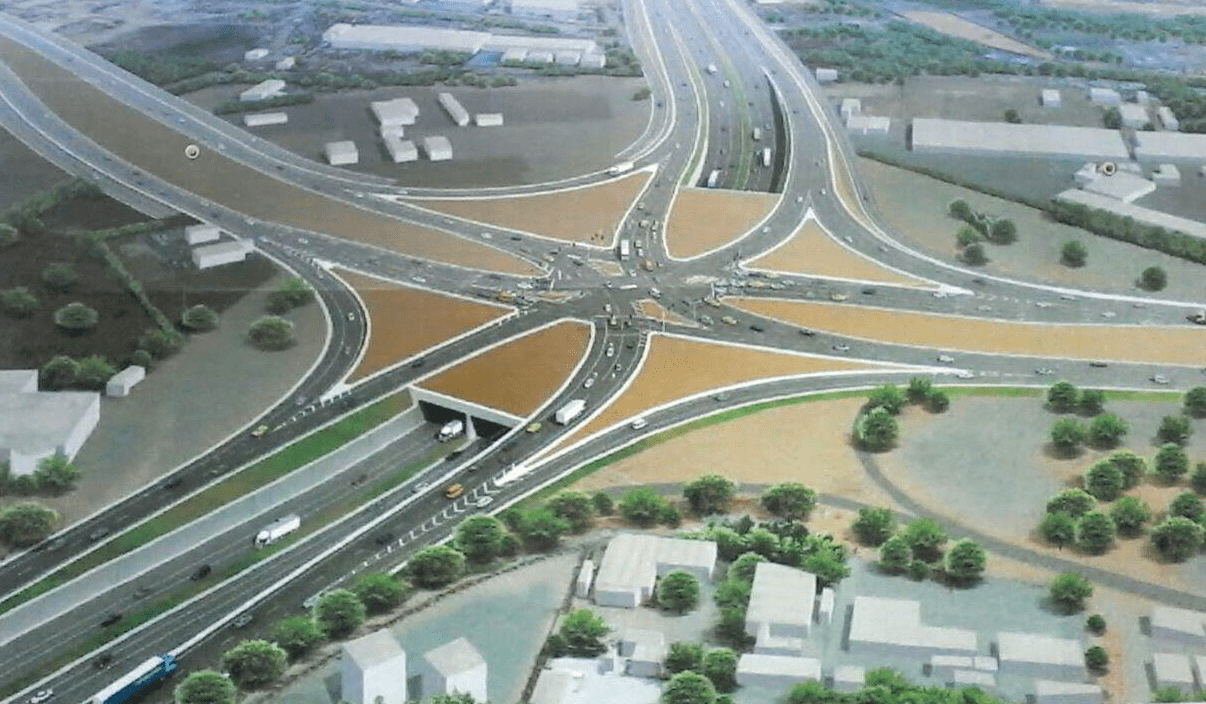 FACT-CHECK: Who lays claim to the Tema Motorway Interchange?

The vehicular traffic situation in parts of Accra, owing to poor road infrastructure across the capital, has been a major and topical issue for years. It is unsurprising therefore that news about the construction or renovation of any road network in the country will be a subject of interest. One of such roads that sparked discussion recently is the Tema Motorway Roundabout.

Why has this roundabout been in the news?

On Friday, June 5, 2020, President Akufo-Addo commissioned the roundabout although it had been opened to traffic since Saturday 16 May 2020. Subsequently, there has been some controversy about the rights of claim to the project.

The National Democratic Congress (NDC) has called on the ruling government to give credit to former President John Mahama for the project. They argue that the former president had cut sod for the construction of the road during his tenure, a formality they claim was repeated by the Vice President, Mahmoud Bawumia.

The evidence adduced for this comes from an article by ghanapolitics.com. That, however, was not about the Motorway Roundabout project but rather a flyover project which was to link Spintex road to East Legon. They are two different projects.

Social media users have also not been left out of the discussion. A post on Facebook, which has since been removed, suggested that President Akufo-Addo did not have the right to commission a project undertaken by his predecessor. According to the post, former President John Mahama is the person responsible for the project’s realization and should, therefore, be the one to commission it. The post was met with a lot of backlash by users of the platform and members of the group on which it was posted, owing mainly to the nature of the language used in the post.

A Little Background of the Motorway Roundabout and the Project

The Tema Motorway Roundabout is a highly used point for traffic from Accra, Tema and environs. The intersection used to be prone to severe traffic congestion, especially during rush hour owing to heavy use of the intersection. In response to several complaints by road users, the Government of Ghana requested the assistance of the Japanese Government to improve the situation at the interchange.

The request was to cover a two-phase construction of flyovers to improve traffic flow at the intersection. A preparatory survey on the project was entrusted to the Japan International Cooperation Agency (JICA) and was scheduled to take place from March 2015 to March 2017.

The period stated for the implementation of the project was estimated to be eight months for detailed engineering design and 36 months for construction work.

Some Details on the Project: Who Did What?

The Government of Ghana, led by then-President, John Mahama in 2013 requested the grant from the Japanese Government to implement the Tema Motorway Interchange project.

The grant signed was to cover two programmes:

“(1) The Programme for Improvement of Ghanaian International Corridors (6,259 million yen)

The first programme was to feature the building of an underpass at the “Tema Motorway Roundabout and conduct detailed design improvements for the rehabilitation of National Trunk Road N8 in the Central Region”. This is in the bid to ensure safe, efficient “road transportation and contribute to the efficient flow of goods between international corridors (the Lagos-Abidjan Highway and the Eastern Corridor of Ghana).”

——–
READ ALSO:
FACT-CHECK: Are Indians throwing their gods away to follow Christ?
——-

The project was mentioned in both the 2016 Budget Statement and Economic Policy of Ghana, and the 2016 State of the Nation Address delivered by the Finance Minister Seth Terkper and John Mahama, President of the Republic of Ghana at the time, respectively. The Budget Statement stated that discussions on the Accra-Tema Motorway project design concept and the draft agreement were ongoing with detailed feasibility studies and designs to commence in 2016 while the State of the Nation Address noted that,

“Preparatory works for the redevelopment of the Accra-Tema Motorway into a six-lane road with 4 interchanges at Adjei Kojo, Abattoir, Teshie Link, and Tema Roundabout will commence soon”.

John Mahama added that the project was ongoing in his State of the Nation Address, as seen on the Official Twitter account for @NDCGH when in actual fact it did not commence until 2018.

According to a press release on the website of the Japan International Cooperation Agency (JICA), the contract for the grant was signed with the Government of Ghana to provide grant aid of up to the sum of 6,259 million yen for the execution of two programmes in March 2017. JICA’s role here was to provide the road infrastructure to support Ghana’s efforts to enhance transportation capacity with the goal of improving the flow of goods between international corridors with the execution of the project by Messrs Shimizu Dai-Nippon, a Japanese construction firm.

Vice president Mahamadu Bawumia cut sod for the commencement of construction works on the Tema Motorway Roundabout in July 2018.

President Akufo-Addo commissioned phase one of the Tema Motorway interchange on Friday, June 5, 2020, with a pledge to commence phase two of the project in the fourth quarter of  2020.

It is fair to say that both administrations played a part in the realization of the motorway roundabout expansion project, from conceptualization, initial groundworks to execution. The John Mahama-led administration started the ground-works for the Tema Motorway Roundabout project. However, the signing of the contract securing the grant and its execution was carried out by the current government led by Akufo-Addo. And contrary to the Facebook post, as the head of the present government, President Akufo-Addo is in order to commission the project.

This article was first published on Dubawa-Ghana