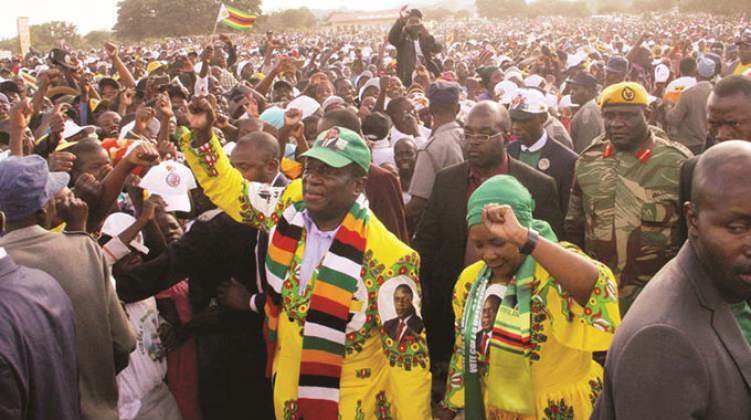 Emmerson Mnangagwa during a rally in Harare

President Emmerson Mnangagwa of Zimbabwe called for calm on Wednesday as opposition supporters clashed with police in central Harare ahead of the announcement of this week’s presidential election results.

“We must all demonstrate patience and maturity, and act in a way that puts our people and their safety first,” Mnangagwa wrote on Twitter.

Separately, European Union election observers released a report noting “soft intimidation” and an “unlevel playing field” during the leadup to Monday’s historic vote – the first since the ousting of long-time leader Robert Mugabe.

Parliamentary results showed 109 seats for incumbent President Mnangagwa’s Zanu-PF, and the opposition Movement for Democratic Change (MDC) with just 41. Two additional parties also received one seat each and 58 of the total 210 were still to be announced.

Harare was tense as people waited to find out the winner of the presidential election, and about 150 opposition supporters gathered outside the hotel where results are being released.

Several dozen riot police, along with water cannon trucks, were deployed to block the entrance to the building, while protesters sang songs in favour of MDC leader Nelson Chamisa outside the gates.

Chamisa has said he is confident of victory, and has threatened in the lead-up to the polls he will not to accept a Zanu-PF victory.

“We won the popular vote and will defend it!” he tweeted.

However, many analysts have said they expect a win for Mnangagwa, a Zanu-PF veteran who replaced long-time president Robert Mugabe after he was ousted in a military coup in 2017.

“I believe that the parliamentary results were released first as a psychological ploy to dampen opposition expectations regarding the presidential vote,” Prof. Stephen Chan, who teaches African political thought at SOAS University of London, told dpa.

This has been seen as a pivotal election for Zimbabwe, with citizens expressing hope for change after years of economic malaise and political oppression under Mugabe.

As expected, Chamisa did well with urban voters, his party winning 27 out of 28 parliamentary seats in the capital Harare and 11 out of 12 in Bulawayo.

After vote-rigging allegations in previous elections under Mugabe, Mnangagwa this time allowed EU observers back into the country for the first time in years.

On Wednesday they announced their findings, noting that while the polls were an improvement on previous ones there had been misuse of state resources and media bias.