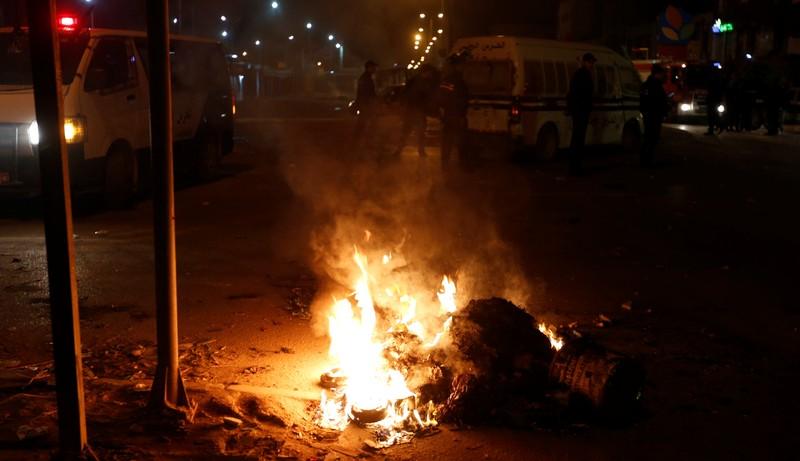 Police vehicles stop in front of burning tires set up by protesters during demonstrations against rising prices and tax increases, in Tunis, Tunisia, January 8, 2018. REUTERS/Zoubeir Souissi

A Tunisian man was killed on Monday during clashes between security forces and protesters in a Tunisian town, the government said, as demonstrations over rising prices and tax increases spread in the North African country.

The Ministry of Interior in a statement on Tuesday said the man was killed during a protest against government austerity measures in Tebourba, 40 km west of Tunis.

The ministry said the man had a chronic breathing problems and died due to suffocation from inhaling tear gas.

Witnesses said the protest had turned violent when security forces tried stopping some youth from burning down a government building.

The state news agency, TAP, said five people were wounded and taken to a hospital.

Tunisia, widely seen in the West as the only democratic success among nations where “Arab Spring” revolts took place in 2011, is suffering increasing economic hardship.

Anger has been building up since the government said that, from January 1, it would increase the price of gasoil, some goods, and taxes on cars, phone calls, the internet, hotel accommodation and other items, part of austerity measures agreed with its foreign lenders.

The 2018 budget also raises customs taxes on some products imported from abroad, such as cosmetics, and some agricultural products.

The economy has been in crisis since a 2011 uprising unseated the government and two major militant attacks in 2015 damaged tourism, which comprises eight per cent of gross domestic product.

Tunisia is under pressure from the International Monetary Fund to speed up policy changes and help the economy recover from the attacks.

Violent protests spread in the evening to at least 10 towns.

Residents said there was also a protest turning violent in the capital.

On Monday, about 300 people took to the streets in the central Tunisian town of Sidi Bouzid, cradle of the country’s Arab Spring revolution, carrying banners with slogans denouncing high prices.

A lack of tourists and new foreign investors pushed Tunisia’s trade deficit up by 23.5 per cent year-on-year in the first 11 months of 2017 to a record 5.8 billion dollars, official data showed at the end of December.

Traders said concerns about the rising deficit have hurt the dinar currency, sending it to 3.011 versus the euro on Monday, breaking the psychologically important three dinar mark for the first time.

“The sharp decline of the dinar threatens to deepen the trade deficit and make debt service payments tighter, which will increase Tunisia’s financial difficulties,” he said.

Mr. Hattab said the dinar may fall to 3.3 versus the euro in the coming months because of high demand for foreign currency and little expectation of intervention from the authorities.

In 2017, former Finance Minister Lamia Zribi said the central bank would reduce its interventions so that the dinar steadily declined in value, but it would prevent any dramatic slide.

The central bank has denied any plans to liberalise the currency but Hattab said Monday’s decline showed there was an “undeclared float” of the dinar.

Data showed on Monday that a weaker currency could further drive up the cost of imported food after the annual inflation rate rose to 6.4 per cent in December, its highest rate since July 2014, from 6.3 per cent.

Apple shrugs off concerns over kids’ addiction to iPhones