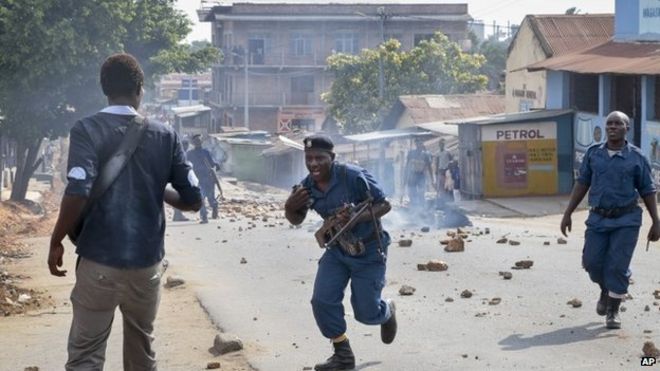 A file photo of a chaotic scene in Burundi used to illustrate the story [Photo Credit: BBC.com]

Police said on Monday that eight people were killed in a grenade blast in one of the deadliest attacks in Burundi in recent months.

Police spokesperson Pierre Nkurikiye said an unidentified attacker threw a grenade into a crowd in the northern locality of Gatara late Sunday.

Nkurikiye said: “Four people died on the spot after the explosion and about 54 others were injured.’’

The spokesprson said the four of the injured victims died in hospital.

According to the police, the attack was believed to have targeted the manager of several state-owned coffee-producing companies.

Police said the manager’s car was damaged, but he was not injured.

Grenade and gun attacks have been a frequent occurence since President Pierre Nkurunziza won a third term in a July 2015 election despite the constitutional two-term limit.

Nkurunziza’s decision to seek a third term unleashed a political crisis that has led to hundreds of people being killed by police, the ruling party’s youth wing, and armed opposition groups. (dpa/NAN)