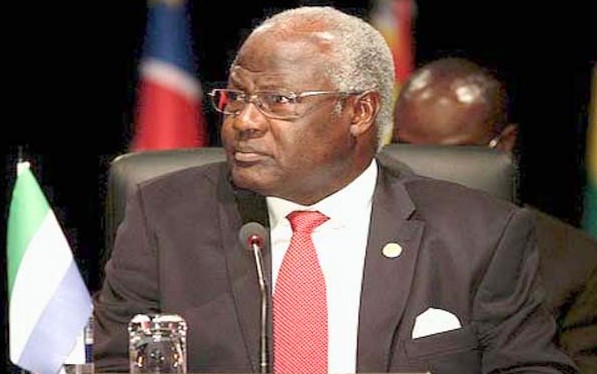 The Vice-President of Sierra Leone, Samuel Sam-Sumana, was fired Wednesday for seeking political asylum in a foreign embassy, the president’s office announced on Wednesday.

According to the official statement, President Ernest Bai Koroma had dismissed Mr. Sam-Sumana because he had “abandoned” his duties.

“Alhaji Samuel Sam-Sumana is no longer a member of a political party in Sierra Leone and therefore does not have the continuous requirement to hold office as Vice President of the Republic of Sierra Leone,” the statement said.
Mr. Sam-Sumana and the president have had bitter relations for months.

On Saturday, Mr. Sam-Sumana said he was seeking asylum in the United States embassy because his life was in danger.

The ruling All People’s Congress (APC) party, had expelled Mr. Sam-Sumana after accusing him of creating his own rival political movement and fomenting violence in his home region of Kono, Reuters reported.

There are concerns after the “sacking” as the country’s 1991 constitution only allows the dismissal of the vice president with the vote of two-thirds of the legislature.

The Constitution however requires an office holder to belong to a party, meaning the president is relying on Mr. Sam-Sumana’s expulsion from the party to remove him from office.

The U.S. State Department said on Sunday it was in contact with Sierra Leone’s authorities in an attempt to resolve the crisis.