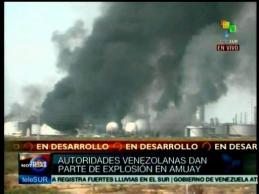 Image of the blast as provide by state media in Venezuela... Courtesy: AP

A gas leak caused an explosion that killed at least 19 people at Venezuela’s biggest oil refinery on Saturday and wounded more than 50 in the OPEC nation’s worst industrial accident in recent memory.

It was not immediately clear how the blast would affect operations at the 645,000-barrels-per-day (bpd) Amuay facility, which makes up two-thirds of the world’s second-largest refinery complex, nor for how long output might be affected.

State TV showed footage of smoke billowing from the refinery as dawn broke, and emergency workers were on the scene.

Stella Lugo, the governor of local Falcon state, said the explosion had also hit homes in the area and that a 10-year-old child was among the dead.

“We are deploying our whole fire service team, all our health team, the whole contingency plan on the orders of Comandante Chavez to first of all care for the people affected by this emergency,” Lugo told state TV.

Located on a peninsula overlooking the Caribbean sea in the west of Venezuela, Amuay is part of the Paraguana Refining Centr, the second-biggest refinery complex in the world with an overall capacity of 955,000 bpd.

“A cloud of gas exploded. It was a significant explosion. There is appreciable damage to infrastructure and to houses opposite the refinery,” Energy Minister Rafael Ramirez told state TV.

Both Ramirez and Lugo said the situation was under control several hours after the explosion at about 1 a.m. local time.

“There’s no risk of another explosion,” Lugo said.

Ivan Freites, a union leader at the Paraguana complex, said foam had been used to control the blaze.

PDVSA has struggled with repeated refinery problems in recent years, crimping its capacity and its ability to fulfill ambitious expansion plans.

In 2010, there was a massive fire at a PDVSA fuel terminal on the Caribbean island of Bonaire, then a blaze at a dock at the Paraguana complex that halted shipping for four days.

Also in 2010, a natural gas exploration rig, the Aban Pearl, sank in the Caribbean. All 95 workers were rescued safely.